Can for sure become a great game


A cute girl with a cute panda exploring a misterious world unknown to her. Beautiful sense of art that calls your attention and gets you out of daily life. Sudden horror-themed messages, characters with expresions that conceal something. It´s still incompleted and under development, but you would enjoy it if you played games like Dreaming Mary.

Hidden content contains spoilers, careful with that.
Also this review was made for the update 4.

I like Annice. It´s interesting how she explores the place while interacting with the several characters and people she finds and her thoughts about it. Once I got the true ending I understood her better, was completely worth it.
Why such a weird score like 3.3? Because however, her development needs to be treated with more complexity, I think there´s the potential for seeing way more sides of her, and I felt like I was slightly forced into certain choices sometimes.
Show
Automatic death when lying or doing a "bad thing" doesn`t cut it (I mean it´s okay but... not all the time, it feels like you´re forcing the player to behave nice) I think Annice should be allowed to develop her character as a bad girl, her dark parts of her personality, instead of automatic game over. We could even get to know her like that; say, in the back of her mind she felt impotent and hopeless since she subconsciously could feel she was not ok (and well, at the bonus room she says "so that`s why I`m always empty inside") so how about she gets to do bad things, she starts distrusting everyone, and at the end she hates all those girls, blaming them for not being able to feel good and be together with her parents? Well… this may have happened on the other endings but I could only play once or twice due to time issues, sorry for that folks

Concept of art is quite pretty, it was one of my biggest enjoyments when playing. Annice pictures, glittering sceneries, mysterious and slightly weird characters collaborated into offering to the player a valuable experience.
But not yet bewitching, charming. In order for that to happen, many actions can be taken: 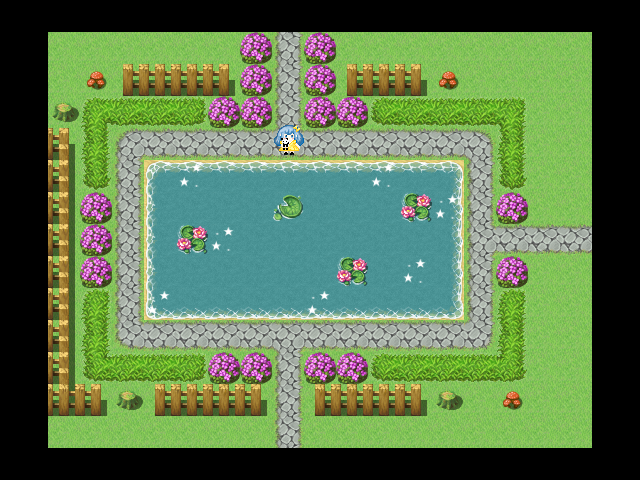 On this scene, I wish I could see a bit of info, like a (stars glitter on the water) or (the water shines like a star) when observed, Not saying anything feels a bit plain.
Seems like there´s not default ost. Now that´s not necessarily bad, I actually enjoy it, but some auditive stimulation could be used for the player to immerse him/herself into the game. For example 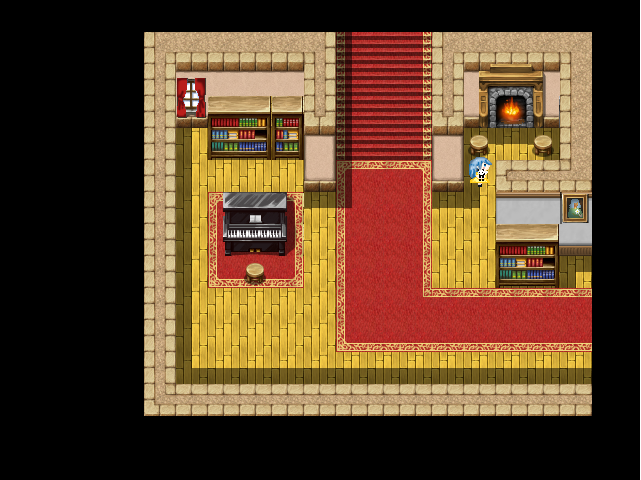 Instead of not being able to touch the fireplace, think about being able to interact with it, to hear some small fireplace sound and annice saying something short like the fire´s comfortable. There´s more atmosphere like that. 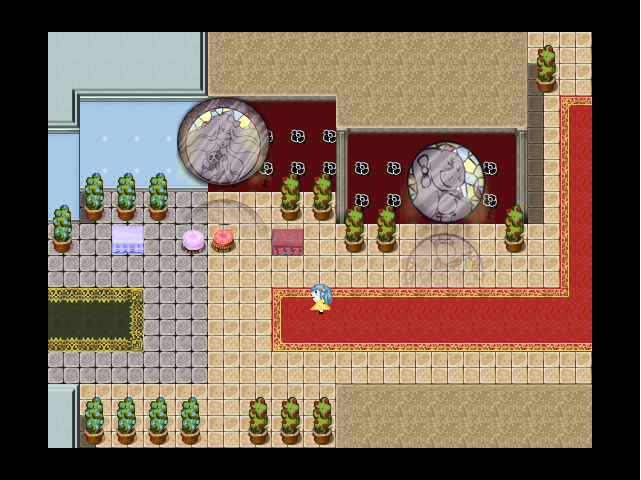 This is a marvelous scene. Is it the same for Annice? Interacting could help seeing the little details. “a plant with red fruits” “a chair” “wall with black flowers” by commenting those when interacting with them, we realize those details too. Since Annice does not get dialogue when interacting at this place, the player just follows suit, goes to the next scene, and does not contemplates or pays that much attention. (I myself had not looked at/cared about the change in wall color, it´s nice)
This also can be used to give us a feeling on Annice personal (childish) point of view. "This tells the hour" for a clock, or "I don`t know that this is" for a few things adults use.... “what is this? Paperwork… I don´t get it” if she sees a book called “house and cost managing”
Show

the idea would be that, since she died as a child, she doesn`t know (should not know) complex words and some objects you understand when you become older.
“this piano…why is it so familiar?” when interacting with a piano at the game
And by the way 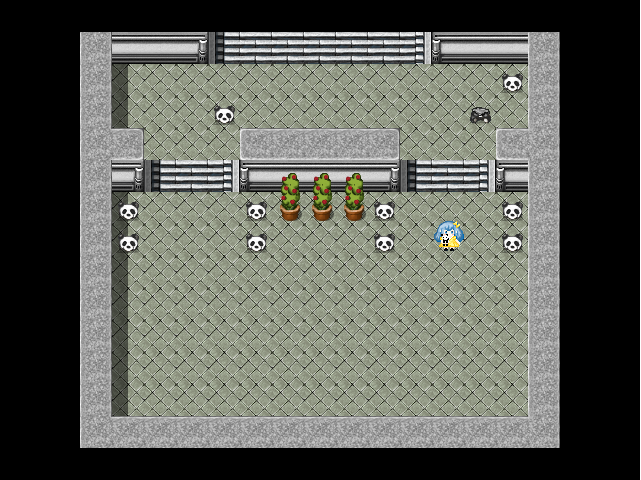 Spaces like these felt kinda empty, like having too much space.
Something else… why cherry gets her own face close-up and, for example, mr fluffy bunny does not? Is she less important then?

The interaction seems to be based on sparkling things-clicking instead of exploring everything. Nothing wrong with that, it´s a system used by certain great games too.
Show

Something confusing: at the bonus stage it would be better to put sparks on the objects to interact with, since along the game all the objects you interact with have those sparks, I saw the piano, the bookcases notes and the documents, but since there are no clear hints of what I`m supposed to interact with I cannot avoid feeling dubious if I interacted with everything.
Also, what was the red carillion for? I didn´t realized 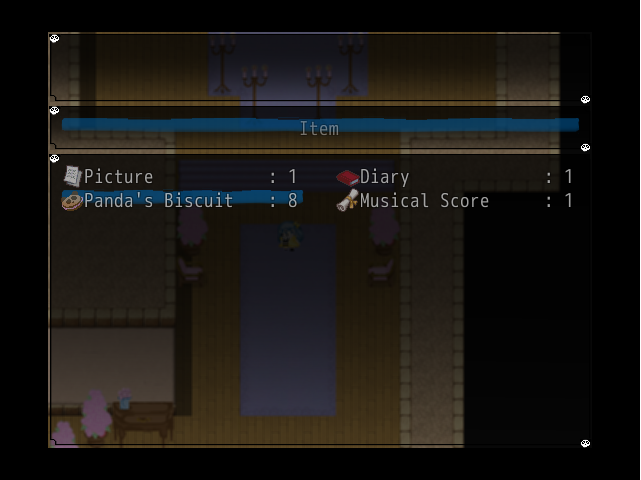 In the menu there was not item descriptions; some little text here would be nice here. It could be either objective or subjective (Annice´s). The first case would be like “small-shaped biscuit” and the second “I like this biscuit, so cute!” 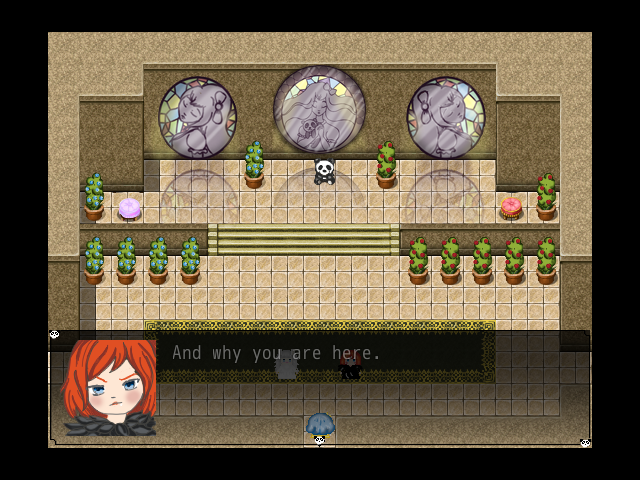 I think brighter text would be easier to read

I gave three stars because sometimes cutscenes or transitions are harsh, kind of blunt. They need more softness, become fluent in my opinion.

I choose not to give the key to elaise (red-haired girl) she said "bad girl!" and game over just like that. Please wrap it up properly, like she orders her guards to kill her or something.
"I´ll give you a bunny suit" (for getting a balloon): A little motion of Annice receiving the suit, or the bunny getting the suit out of somewhere would be better than instantly transforming into cute bunny Annice form (still I loved cute bunny Annice form, I wanted her to keep it)


Sometimes pictures appear so suddenly, maybe adding a darkening or illumination effect would help, unless they´re for the horror element.

There were things I liked and things I didn´t like.

Puzzles are too simple and about seemingly random things from the playthrough. They gave me the feeling of something rushed, without too much care. Instead, interesting puzzles could make you think about the game itself and the plot, or puzzles that represent more of a challenge.
Show
The sleeping penguin and the mirror asked me things like...I don´t remember clearly, but were things about how many color balls there was on a certain staff, how many dressed penguins, or black penguins there were at a certain place... things like that. The first mirror puzzle as about inverting letters, but that was not very interesting. So instead think about the puzzles from The Witch´s House; SPOILER FROM OTHER GAMES, CAREFUL
Show
one of them involves killing a beautiful, innocent and pure yellow rose in order to get something out of vile, envious roses. That implies the main plot, as Viola was an innocent girl that wanted to be friends with Ellen, the witch. But Ellen was envious of her and took away her body and liberty.... so those roses refer to her story while playing.

Let´s see... I think pocket mirror´s puzzles also have that kind of vibe.

Some world setting and side character development is needed. What I mean is, (this is for the creator) to correlate the different characters, npc´s and world to one another and make a great picture in your mind.
Show

Elaise, the red-haired one is on the “Kingdom” so what are the other girls’ dominions? What is this world? Is it an illusion, the inside of Annice’s mind, what´s this?
"yes the globe, it´s nice! I´ll leave for a bit and do whatever you want!" that needs to sound somewhat more natural...I mean, she left before and she´s leaving now without an explanation, what´s she even doing? Could fluffy bunny for example be in charge of maintaining/cleaning the place, then she says “Oh sorry, I must go cleaning this sanctuary/place/dunno, so you´ll be on your own, you can do whatever you want”
You see, Elaise had a role, to be the “queen” I guess? So the other girls would do good on having complete roles into that world as well. I want to see a full-fledged world that moves by itself (illusion world maybe?)
Speaking about the girls, do they represent parts from Annice´s personality? Is there any meaning to their behaviours, like expression of Annice´s feelings, or they help represent, or conceal, traumatic or affectionate experiences in her past?

The story was easy to understand and nice as well.
The true ending was quite surprising, you got me there.

I have faith that if these flaws are covered, this will definitely become a charming, breath-taking game.