On the story side of things you start out by awakening in a facility with no clue who you are or where you are. After all, every good game out there has to include amnesia, right? Oh well, I suppose this game is just another reminder why amnesia is RPG Cliche #1. I suppose I should put aside my minor gripes about yet another game including amnesia as a major plot point and instead focus on the goal of your character which is to escape from where your being held. Of course, along the way you'll need to take out guards that reveal were in some sort of prison. Though, why I, female character, or W, male character, were imprisoned in the first place is never explained. We don't even get an explanation for this even when we run into the warden who reveals that W knew him. And is likely responsible for why the warden is mostly bald. Though, I suppose the details on that are rather irrelevant considering you need to kill the warden in order to beat the game.

Where "Project W.I.P.E.D" really manages to stand out is its combat system that places a heavy emphasis on the distance between yourself and your enemy in order to calculate how much damage you can do to them. Though, I do wish the game gave the player the ability to push enemies more effectively into their own back row as well as allowed the player to invade their front row in order to keep them trapped back there. Though, I suppose a team comprised of a sniper and a brute wielding a shotgun would have an absolute field day if that was possible. After all, you'd be able to pound them merciless at both long and short range.

On the difficulty front the game ranges from moderate to easy in my opinion. And while I realize that some might disagree with this assessment. I really only ran into one battle that gave me any real trouble. And that was the final form of the final boss. And, I largely attribute my failure in that battle to focusing to much off my attention on lowering his shields instead of controlling how much damage he could dole out. As a result I lost W rather early on in the fight do to my own carelessness.

On the plus side the game does contain a few custom assets or at the very least assets lifted from another source. On the downside, the bulk of the game's look appears to come from the RTP. As a result the game really doesn't stand out all that much visually from the dozens of other RPG Maker VX Ace games you can find on this site. 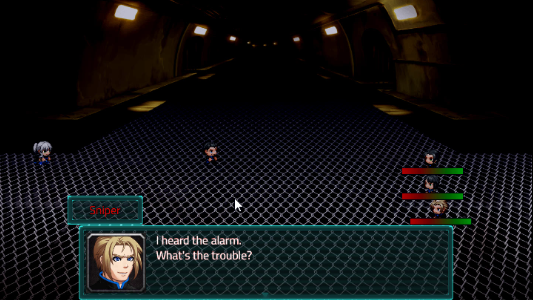 And to make matters worse, I'm not particularly fond of the chibi look of the playable cast in games like this. Especially when they spend the bulk of their time in rooms designed for people of regular height. After all, it creates a visual clash that's really unappealing to look at.

On the plus side the game makes use of music by Powerless Sounds and ECE-SMZ in order to give itself a bit of a unique audio flair. On the downside, none of the tracks it uses really stand out in any memorable way for the player. As such, the background music is just kind of there. This isn't to say it's bad, but this game definitely isn't going to win any awards for its efforts in this area.

"Project W.I.P.E.D" is a game that leaves me with rather mixed feelings. On one hand, the gameplay is really solid and different enough from the usual fare you run into to give the game a unique flavor. On the downside, the game ends in a way that clearly sets it up for a sequel or two that may never happen. And, I really hate not knowing how the story ends. As a result I'm not sure if I should recommend this game or tell people to stay away in order to focus on game's with far more rewarding resolutions like "Luxaren Allure".

Close
02/05/2019 05:39 PM
Thanks for taking the time to review my game. I'll do my best to work on my weak points(RTP Graphics, story, writing) on my next game while keeping an unique combat system.
Pages: 1