In the central Andestolia lies the Vampire Empire, spreading the darkness around the world. They sealed the light of the sun with a vessel of magic at the cost a thousand souls via human sacrifice. After thousand years of vampire rule, even as darkness covers the world, and a moon as red as blood shining in the sky, they have realized their mistake.

The King of Anglormarc commanded to all the Vampire Magus that still exist in the Kingdom to doing the magic experimental to creating the sabatiel stone "Philoshoper's Stone" to seal the bloodlust of human. The Stone that need the pure hearth of virgin blood.

Philia's a girl from Origin World that've been kidnaped for experimental purpose, after kidnaped in unknown place, Philia must survive with single candle.

Outcandle is Puzzle Game flavoring Horror-Gothic theme with Overhead display, this project was created in event GGJ17 in two day by 4 of Us. After GGJ17 is done, We're continuing this project to make more long gameplay, add new features and including the story.

To be honest, this project was our first time to created horror-game, so Im not sure about the feeling of horror atmosphere, or the mechanism of puzzle, but we're as team will doing the best.

And we're willing and pointing to selling this game if worth enough to being selled, and perhaps this project can release Demo before this year, since there's alot of things that must to add, and because since we're small team we've some difficulty to complete it.

Philia J. Rose
The daughter of a farmer, she lives in a village in the Wallach country. She's transported by magic to an unknown world.

Des Dhampire
A half-vampire who traces his origins back to the very outset of vampirisim. He's betrayed the Vampire Empire, fallowing an ever-faithful dream of living in the world of humans.

OutCandle
The Scared Original Fire is the one light can exist in this world of darkness. It meets Phila in a sealed room, and assists her to reach out for hope.

Vamp Gracia
The lineage of VampMagus of Kingdom of Anglorcmarc, She's doing her magic experimental by using human as source to gain the bloodheart of virgin girl.

Vamp Genesis Ius Logalic
Legend said he was exist before human, He's the ruler of Anglorcmarc, after sacred war fighting Dracuela race, Ius Logalic commanded to all Magus to seal the sun.

so this's my first devlog in here so i can't tell to much about some system that've been added to the game, because i dont know how to explain it especialy in english and actually write something in english is not my skill though. But is okay because that's why i share it in video, so you all can easely understand.
So in this video i've share some system in menu, and fixing more things, and perhaps all system that we want can completely as soon as possible.


(or this when it can't be auto generated video player )
https://www.youtube.com/watch?v=tD1oyPWxX2o

and some screenshot yey!. 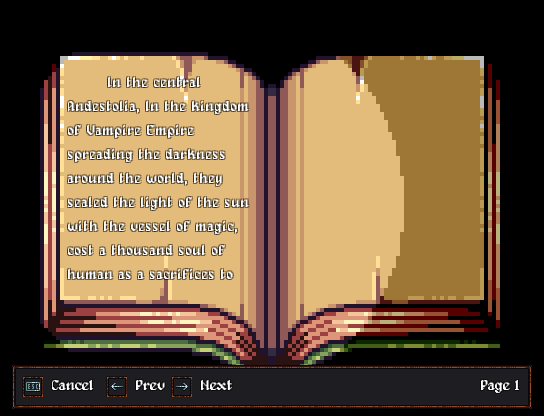 a book system yey! *clap2*
that's what i want to say, finally a scene that match for horror style, and
hmm... you can actually finding alot of more book in the game. 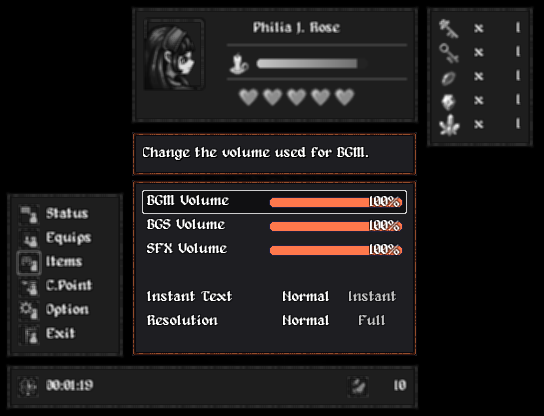 Option system.
for you that don't want to hear something like jumpscare, and change other setting. 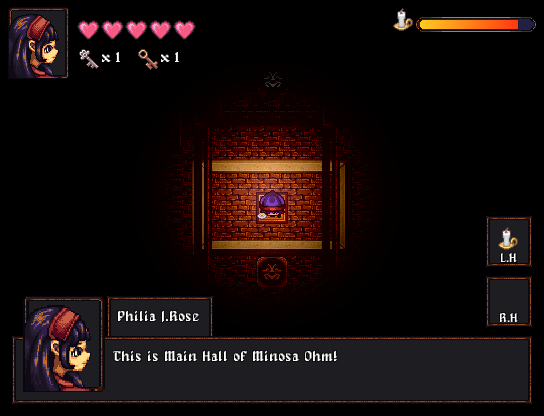 what is that? that just like before.
indeed yes, but i just set it to make more responsible, so i can see the HUD when message's comes too.

Some system, text or dialogue is still placeholder and not actual stuff so, if that bother you please, take it properly.

and with this, we perhaps can continue in graphic and stories for the next.
Philia's Status - Knowing Mental Situation.

author=suzy_cheesedreams
This looks cool. I like the title "Outcandle" a lot.

There are typos & grammatical errors in the game's description on the search page.
Show


thanks for suggest it, im not good in english so, sorry for all.
cleosetric

Close
02/21/2017 10:49 AM
This looks veeeeeryyy cooool!!! The graphics are stunning and the characters very interesting as well as the story!! I really look forward for this! ;)

I have a question though: Will the game always be from the "bird's eye perspective"? I mean from above the character?
cleosetric

author=Make_it_MagiK
This looks veeeeeryyy cooool!!! The graphics are stunning and the characters very interesting as well as the story!! I really look forward for this! ;)

I have a question though: Will the game always be from the "bird's eye perspective"? I mean from above the character?

hmm... talking about the concept, i think i'll use sideview perspective for some scenery moment / cutscene but not yet applied, we'll still working on story so, please waiting ^_^.
ReydVires author=kureome
I really like that you can silence the jump scares! Can't wait to play this.

yeah jump scares, just be ready for that, and prepare for something mind = blown.
bicfarmer

You should probably make that more noticeable.
Pages: 1