2 reviews
"This could be the next game that transcends the need for flashy modern gaming systems and tells its story through solid, simple gameplay, narration, dialogue and setting." -Orange Bison

You can't run from the past. But what if you could change it? In Tumbling Apart you live the story of Isaac, a man riddled with guilt over the terrible fate that has befallen his sister. When a mysterious power grants him the ability to re-experience their life and former tribulations, he must harness the potential of forever altering their tragic destinies while overcoming the greatest struggle of all: The demons deep within one's self. This narrative driven RPG tackles themes and raises questions previously unexplored within the burgeoning genre.

Details
Just like Isaac, we all have guilt. We have all made mistakes. But what about the one mistake we can never forgive ourselves for? What if you discovered you could somehow "fix" it?

Now is your chance. Take the opportunity.

Tumbling Apart is a heartbreaking tale of love, loss, and redemption, spanning unique and aesthetic worlds that bridge the depths of time. Live out the story of Isaac's life and explore the human cost of abusive relationships, alcoholism, drug use and abandonment. Witness the devastating effects of personal loss transform into a hope born from the unlikeliest throes of darkness. Pandora's box will be opened with Tumbling Apart.

This isn't a game. It's an experience. Desperate to be lived out. Demanding to be remembered.

"Tumbling Apart creates an air of mystery that drew me onwards, not dissimilar to the way games like Gone Home and Everybody’s Gone to the Rapture have." - Andrew Jeffries, OB

"This is the game I have wanted to play. I highly recommend it!"- XstikermunsterX, Youtuber and Let's Player

Tumbling Apart: Then vs Now

This month will mark the second year that Tumbling Apart has been in development, and the final one before it is released on Steam. During that time, there have been highs and lows, tears of joy and frustration, and a whole lot of learning. We're at a point in the project where we’re diving into the meat of the climax, and because Tumbling Apart isn’t so much a game as an interactive story, I don’t want to give anything away by revealing any screens. What I can do, however, is show you a bit of how much Tumbling Apart has changed over the course of its life.

Disclosure: I’ve always considered myself a writer. When I began work on Tumbling Apart, I made sure to keep that priority number one. It takes a team of dozens (sometimes hundreds), to create the visuals you see in modern AAA games. That’s a remarkable achievement and a testament to what a talented group can do, but it isn’t what Tumbling Apart aims for. I kept reminding myself throughout development: You don’t have throngs of gifted artists working on this game, but it only takes one to tell a story.

You have to play to your strengths.

Keeping that in mind, visuals in games are still pretty important. Let’s be honest- if they didn’t matter, we’d never feel that hankering to play games at all and just stick with novels. I like to think of visuals as the vehicle by which immersion is facilitated in the gamer. Take a look at our new title screen compared to the old, earlier than beta version: 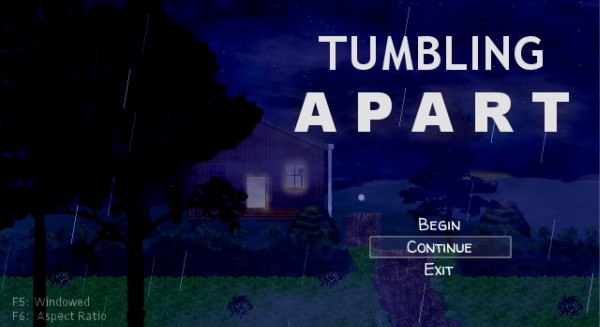 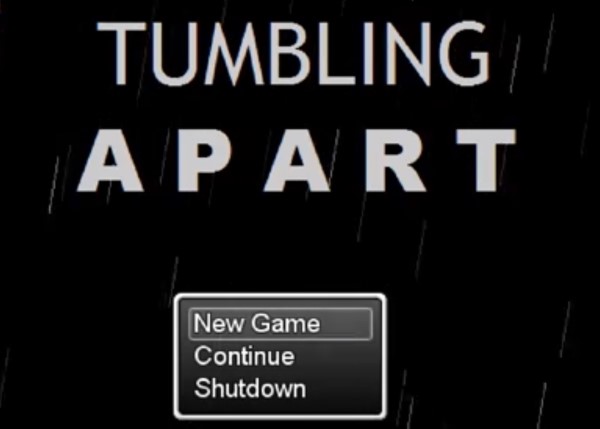 Sure, neither is going to win any awards, but the newest doesn't look so... amateur. Plus, it sets the mood for player before the first line of dialogue even appears on the screen. It helps to create the tone.

Moving on, we can start to take a look at animations. Here’s a gif (or is it jiff?) from the opening scene of Tumbling Apart when graphics were just a placeholder compared to what it is after some polishing:

Again, no awards here. But the added touches in the finalized version bring just enough detail to facilitate that immersion within the player. There’s actual dust blowing, the words are no longer static, and Isaac’s hair waves in the wind as it pushes against him, threatening to drive him back. It isn’t much, but it all comes together to help that story feel just a bit more alive.

Finally, you never want to look lazy. What are you going to think if you fire up a game only to find the sprites are the exact same stock assets you’ve seen time and time again? If the devs don’t care enough to even change the basics, how much attention have they given to the narrative? Now that we are approaching the end game, we can finally work on replacing the stock character assets. Here’s a peek at the old Isaac and McKenna beside the new, created by the talented Gustavo Santos. 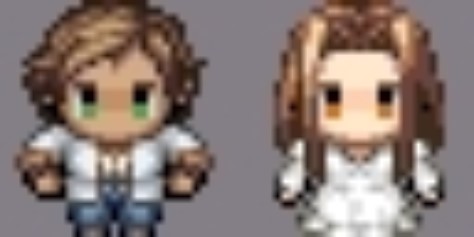 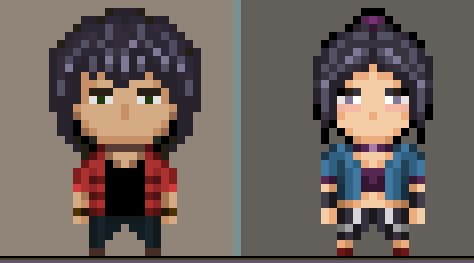 Expect the Steam Page soon. In the meantime, if you’d like to learn more about Tumbling Apart, we’d love to have you on Twitter, Tumblr, or on our website: tumblingapart.com

Thumbnail of the hand from Hell

author=NTC3
Sounds really great! Can you tell me long does it take to play through the demo?

Thanks! And sure! I would estimate it to be between 15 and 20 minutes. If you get the chance to try it out, I would welcome hearing your review, or a greenlight vote if you enjoyed it. Have fun! Close
02/27/2017 01:08 PM
It actually took me more that 20+ minutes due to a rather empowering speech from our dorm manager who also ruined the experience for me.

Concept is good so far and of how the story and gameplay mixes together.

There is one problem. And no, it's not the game's problem. It's that my laptop is low-tech lowkey af and it lagged on me so much at the cemetery area (though FPS went better when night came 'round) that my laptop died out because the battery dozed off on me.

Have you already tried A Hint of a Tint?
Pages: 1