I'll admit upfront that my score has less to do with this project as a game and more to do with how much I personally despise the dirty in-joke this project is based on since you play as young girl named Honey whose trying to avoid having a bunch of pedo bears rob her honey pot. So this is a game where your playing a girl whose goals is to avoid getting repeatedly raped by bears. And if enough of them corner you they'll gang bang you to death.

So much like the infamous "Hawkman" I hate this game on sheer principle regardless of any of it's other merits.

"All Bears Love Honey" is a stealth game developed darkotakusouls using RPG Maker MV whose entire existence is based around an Internet meme. A meme that I find deeply distasteful as previously mentioned, but I have other issues with this game beyond it being about a bunch of pedophiles gang banging an underage girl until she dies.

You play as Honey whose sent to deliver a bunch of honey to various oddballs living nearby by your mother. Apparently she's trying to become mother of the year by putting your life at risk since she knows there are hundreds of pedo bears that just love honey living in the nearby woods, but these bears have also overrun the town as well. 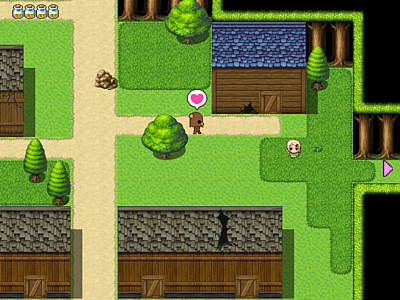 I'd ask the local guards to do something about it, but they appear to be pretty useless. So much so that I'm surprised they haven't thrown down their weapons and simply run away. At least that way I might be able to pick up a spear and stab these pedophiles to death.

At any rate the game is comprised of two missions which require the player to deliver six jars of honey, but the underlying nature of the story means I've never gotten past the first day before giving up in sheer disgust. So I really can't talk about second mission where you need to traverse a cave beyond knowing it exists.

You run around trying to stealthily avoid pedophilic bears in various locations. Though how the bears detect you isn't particularly clear since you can sometimes get right up next to them before they detect you.

In fact, the bears will sometimes miss you when your two spaces away but suddenly give chase when your six or seven tiles away. There just isn't any sort of consistent rule on their vision or smell range which just makes avoiding them even more annoying. To make matters worse you'll sometimes enter areas only for these pedophiles to instantly detect you.

Thankfully if you enter and exit an area the enemies will spawn in new locations to a certain extent. So you can use this to get the pedophilic bears into positions that will help you avoid them, but this is only so helpful. To make matters even more annoying you need to press the interaction button to switch screens. A decision that only seems to exist to punish the player since it means if you panic and forget to press the button as one of these pedophilic bears chases you towards the next screen they'll be able to grab you from behind.

Graphically the game is mostly comprised of the RTP for RPG Maker MV which means the few non-rtp assets like Pedobear and Honey's faceset really standout. And while this is mildly annoying. It's so minor it barely feels worth mentioning after everything else I've mentioned.

While the game's title screen has a rather funky beat behind it. A lot of the other tracks appear to be pulled from the RTP which makes the music on the title screen standout. Though if this is a positive or negative depends on if you enjoy it or not.

While I'm well aware of the original purpose for Pedobear. It doesn't change my opinion that building a game around an underage girl trying to avoid getting raped to death by this character is in poor taste. So while I'm apparently in the minority I'd advise skipping this game in favor of something less rapey. And if you want a game about bears you'd be better served playing "Punch Bears" by MakioKuta.

Close
01/25/2023 11:18 AM
Holy hell, not sure why I apparently wrote this a positive review a few years back let alone thought it was silly. My teenage self continues to embarass me beyond belief.

How explicitly stated is the pedobear/rape thing in the game? Is it outright implied or is it just a pedobear sprite that’s used in a different manner?
thesacredlobo

Though I suppose the game over screen being different shades of pink with hearts on it as a pair of bears look down at you helps as well.
Pages: 1