I'll admit that one of my general rules of thumb is to never play a game on this site that hasn't been finished. A rule that was born out of playing games like the "War of Harmony IV" a My Little Pony fan game that is meant to be the final entry in a series of games. Of course, the other three entries in the series have never been finished and the developer has since moved onto making games that he can sell for a profit. As such, I don't think the other entries will ever be completed.

As for why I'm tackling this game if it goes against my usual rules. Well, that's because there's currently a bounty on offer for this game. 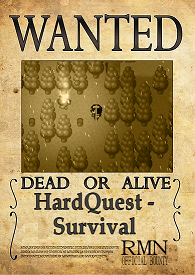 I'll admit that I can't fully judge this section of the game for two reasons. For starters I've only spent about thirty minutes or so on playing this game. As such, I really didn't get that far into the demo in order to see if the plot thickens beyond what we get in the opening text crawl. And secondly, I can't fully judge this aspect of the game because it hasn't been finished yet. As such, I can only offer a tentative review on what little I do know about this aspect of this game.

As it stands, "HardQuest - Survival" appears to be a rather straight-forward game about a chosen one that needs to slay an evil wizard whose magic is slowly corrupting the land. So much so that the forest is starting to rot away and be replaced by an endless sea of sand. As such, we need to stop him in order to save the planet itself from turning into an inhospitable wasteland.

Where the game really starts to fall apart in my opinion is with it's controls. In fact, I'd argue that the default controls feel really unwieldy if your used to playing RPGMaker games. So much so that I'd recommend avoiding this game because of those issues alone. On the plus side you are allowed to edit the controls. On the downside, your only allowed to edit some of the controls. As such, you can't simply switch from using WASD for moving your character to using the arrow keys. Which is problem in my opinion since I'd rather being using the arrow keys to move while using the z and x keys to control which hand I'm swinging/using in combat. After all, this puts the controls back to what I'd expect on this site.

Another annoyance with the controls is that you really need to go into them and turn off the mouse controls. If you don't your character will be constantly looking in the direction your mouse is at on your screen regardless of which direction your heading in. As you can imagine this becomes a rather large problem when your being attacked by enemies. Thankfully you can turn this off if you go into the menu, but I'd have to ask why the mouse controls aren't simply turned-off by default.

Of course, once you start to adapt to the controls and how they operate. You quickly come to realize that this game appears to play a lot like "Runescape". So much so, that I honestly wonder why anyone would bother with this game when you can play a similar game for free. Though, I suppose it's been so long since I've played "Runescape" that I'd have to dig around for a more classical build of the game in order to enjoy it.

In a weird way you could argue that the most notable aspect of this game it is music. This isn't because the music is so good that you just have to play this game, but because there is no background music at all as far I can tell. There isn't any background music playing on the title screen in order to get you pumped up for action like "Atelier Iris 3" nor is there any background music playing while the game gives you a brief overview of the story so far. In fact, the first sounds you'll hear in this game are the crackling pops of the fire at your starting camp. And this is accompanied by the billowing sounds of the wind.

"HardQuest - Survival" is one of many projects that has been left to rot on this site. And seeing as how the last update was back in March of 2017. I really don't have high hopes for eshrah coming back to finish this game. In a way this game only serves to remind me of other projects that I wish were completed. Probably one of the best examples of this is "Ellie Starling's Very Long Walk" by everybear. As it stands this game is an interesting project, but I'm not sure its really worth anyone's time. After all, what's the point of playing a demo for a game that will never be finished? But seeing as how the game is incomplete, I won't be giving it a score.