Hello everyone! Welcome to my review for Shadow Star by ShadowStar4/Ghaleon! This game is such a polished project with tons of cool features and great visuals! The eventing is so clean and this game is set to become a great RPG!

The game started in a cool looking cinematic-like intro! It got me hooked immediately, from the mapping, the dialogues and the intrigue! I was amazed by the usage of particle effects and animations already! I knew I was gonna be putting myself into a cool adventure with this game. :)(Also, dat "Muhahahaha!" at the end of the intro xD)

You play as Lance, a very nice and kind hearted guy who wakes up from an awesome dream (the intro). Lance, who is living a normal life with his family in a small village, is soon to be entangled by a much more larger plot that involves the Shadow Star, a threat that is meant to put an end to the world Galandria, as we know it. The story starts the day of Lance's birthday. Lance doesn't seem interested in learning the ways of the sword, like his brother does, as he is much more focused in White Magics, with all good intentions. He, however, does not wish to disappoint his brother Bryce and his father, so he decides to learn swordsmanship to appease them. Thankfully, he has chosen something that'll balance both his own dreams with Light Magic, as well as his brother's dreams of him being a good sword-fighter.

The gameplay is a really cool side view ATB! You can switch battle roles that will determine how you gain TP during fights, it's a really cool touch! The Synergy system is also very cool and unique, there's tons of great features in the battles that makes it very fun, interesting, and always engaging! There are tutorials being shown by pictures, and they're very well presented and visually appealing. The game also features a short mini-map, which makes exploring the map very helpful. The first boss, fighting the Goblin mage, was very fun and engaging btw.

The mapping, the charset sprites used, and the animated battler sprites are just fantastic! The parallax style mapping is just super effective and they look so beautiful! The interior maps are spot-on, too, making exploration very worthwhile. The windowskin and menu background features a beautiful midnight purple color. I just loved everything about the visual aspects of this game, especially the battle HUD! That cool looking blue orb with the swords pointing to the battle commands is just so badass looking! The animations and action sequences are very well done (I especially love the healing animation of Lance). There's a series of great eventing in this game. The battle backgrounds are also very well designed with some fog and particle effects added unto them. Again, I couldn't help but fanboy over the cool animated battler sprites that this game has! 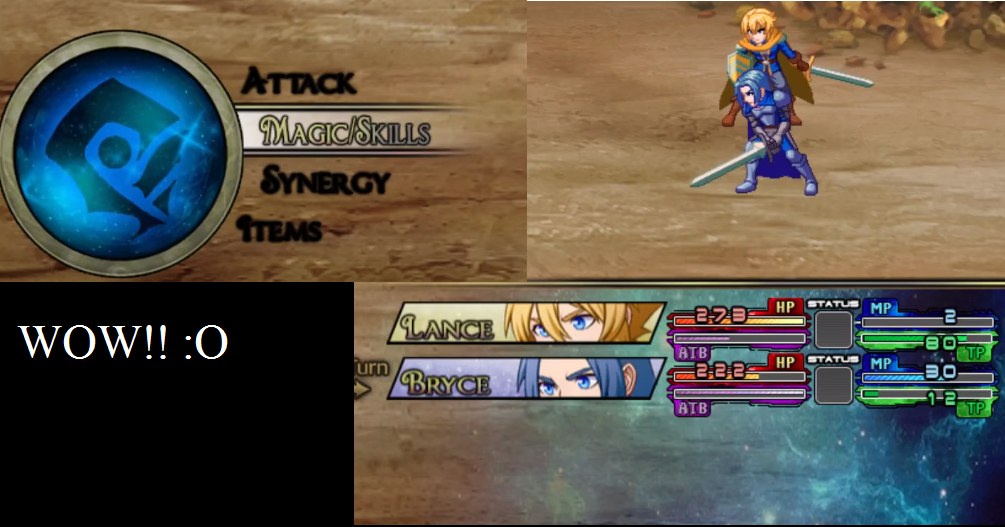 Can you just look at the battle HUD along with the animated battler sprites? WOW! :O

Music is great! They're fast-paced and are well used in specific occasions. The town music was very peaceful, but the battle music was so cool and intense. xD Very engaging tunes.

This game is fantastic! Lots of cool features and shows much promise to be a great RPG game for everyone to enjoy! ^_^ There are tons of effort and love put into the game and I cannot wait to see it get finished! :) A well deserved 5/5 if it were a full game. ;)