Return to the Land of the Pokédeads!

Good morning!
And welcome back to a horror game about Pokémons!
Pokémon Dusk Chronicles: Dave is a 2017 prequel (available in english or german) to Pokémon Dusk and Pokémon Dawn by MrPrinz. I played both these games, but if you missed the previous adventures, well, just look here:

You really do not need to play these games since this is a prequel, anyway there are clearly some connections since the protagonist of this game is Dave (of course!) a character encountered in Pokémon Dusk that I also mentioned in the review. The premise is rather simple: there is an infection that turns both people and Pokémons into the popular undead fleash eating creatures called zombies. Unfortunately Dave, unlike Ethan and Drake from the two other games is not a trainer, so he hasn't a friendly Pokémon that can help him. But he doesn't need help, since he has a gun! And some cool sunglasses too!
Ok, basically our friend Dave is a badass like the protagonist of Pokémon The Evil Inside series, even if in this shooter-adventure we do not just kill human and Pokémon zombies, but also learn about his story before the events of the first game. 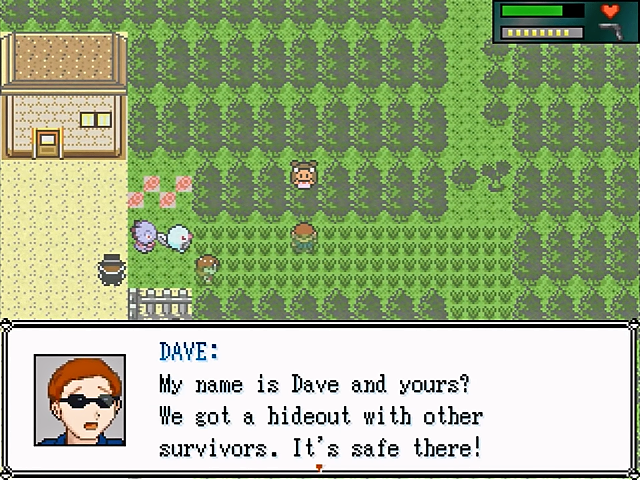 Being a hero is never easy. Never!!!

The combat system isn't much different from the previous games, the only difference is that the gun has limited bullets (unlike the Pokémons!) and has to be reloaded, but for the rest it plays in a similar way: real time combat/shooting without the need of having a Pokémon around (even the interface on the upper right of the screen is pretty much the same, with the addition of listing the bullets). That's it.

Visually the game uses the same assets of the other games, but I found it rather appropriate especially in this occasion in which we do not play as a teenager trainer but still a character that lives inside the world of Pokémon, and despite being a totally normal person, Dave he can still prove his usefulness in this dark setting. So in this case the use of facesets, charsets and chipsets directly borrowed by the Pokémon games makes even more sense, these are used very well because even if this is a totally different game, we still feel inside this setting, in particular Goldenrod City. Clearly the game features edits (zombified characters/Pokémons) and some blood like the previous entries of this series, anyway all violence is on the pixelated level.

In fact for the rest this Pokémon Dusk Chronicles: Dave is a totally classic zombie story, that could have really been placed in another setting or world, I mean Dave is not only a badass but also a normal person with a girlfriend and immediately from the beginning you will understand that this is going to be a grim and sad story of someone that just wanted to live a normal life, but no, he became a survivor in a dark, bleak setting. I won't tell you about the other characters that he'll meet and what will happen, because that's something to discover, and this will be something new also for those who played the previous titles. 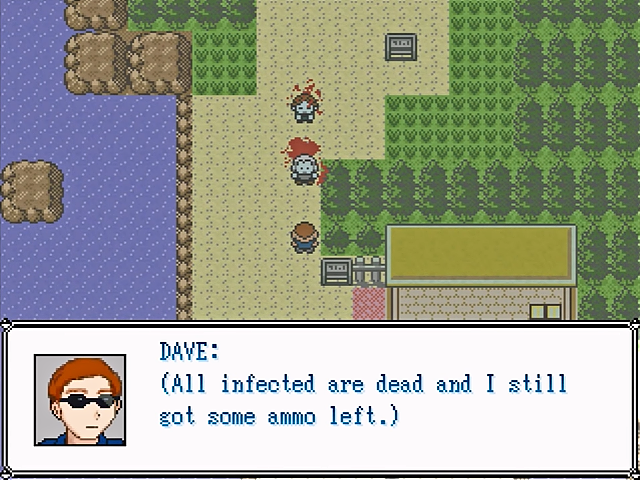 All is well that ends well! Now let's go home and read the...

Final Verdict
Dave's mission is to help people reach shelter, and fend off the monstrous undeads, nothing new but still nothing bad. Overall this is a nice little side-story that you will surely like if you liked the other two games, and takes about one hour to complete, more or less! I found no errors, no problems, well the fact that you have limited ammo is a bit annoying (and makes the game more challenging too of course) but uhm ok, at least we've a different story and a different protagonist that isn't just another trainer!

Pokémon Dusk Chronicles: Dave is a worthy entry in the series, not my favourite because I liked Drake much more than Dave as a character, still it's an enjoyable short scenario and story that even if it does not introduces anything really new, it's still competently made and pretty good. After all, everything is better with zombies!