Howdy! And welcome to an adventure of sea battles!

A Bit of a Little Dinghy is a short adventure game about a gang of sea raiders, a bunch of misfits named Steve, Steve and Steph! And also their boat named... oh yeah Steve (oh come on, they could have been Steve, Stephen, Steph and Steven! It would have been still funny!). And no, you CANNOT rename them! Ok so they are broke and live in a crappy village so they decide to do some quest for the local nobleman. This is the simple premise of the game: running errands for the k̶i̶n̶g̶ princess of the island.

Being a game of pirates... or better, adventurers with a ship (they never call themselve buccaneers or pirates, that is! And no one refers to them with that term, anyway there are pirates and marauders as enemies) what you can expect are some fetch quests and combat, both on foot and naval battles.

On foot you have the classical party combat encounters here the three characters (the boat does not participate, strange isn't it?) fights against bandits and critters. They have different skills, for example Steph (the only girl) is the gunner, physically weak but with some deadly (some multi target) gun attacks, and clearly more skills are earned levelling up (and characters levels up fast, no need to grind, just do not avoid too many encounters). 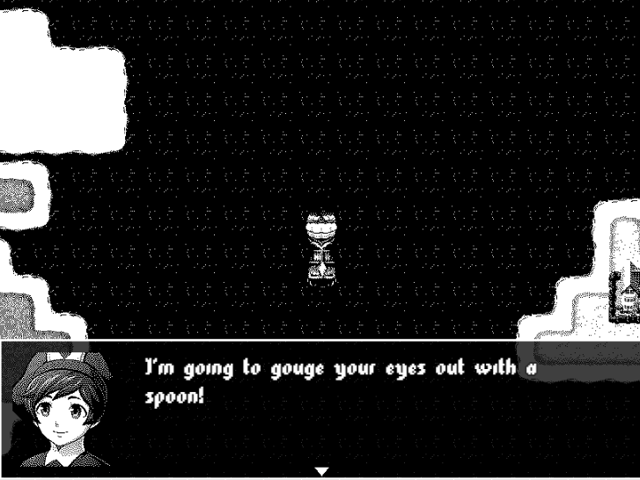 What a naughty child!

Naval battles. Oh yeah, that's where the game becames interesting: Steve the Boat, and only it, is the only one capable to inflict damage to other boats and withstand their attacks (because it has a ton of hitpoints, and cannons do a lot of damage). Luckily every attack will hit Steve the Boat first (a single cannonball will make every human character fall down!), and each member of the crew can help spending using their skills to buff/heal Steve the Boat or debuff the enemies lowering their skills or defenses. Again, levelling up unlocks more skills and attacks (yes, also Steve the Boat levels up an earn stronger attacks), but remember that you can also find some useful single use items like the lute and the spyglass that can be used by the crew to bestow various effects to their party or to the enemies! It's interesting noting that also the opponents have the possibility to buff/debuff but this is instead of attacking, so combat against a single ship is usually pretty easy (took me 2-3 turns each time), while fighting groups of three ships (especially the tough and powerful battleships) is another matter (remember that you can debuff/heal three times but attack only once, they may attack two or three times and their target is just one!).

Even if you can heal resting at the ports (one is free, the other has a small fee to pay) remember that there are some healing items that can be exploited during combat (since some will heal a percentage of health of each party member this means you can heal and also resurrect Steve the Boat in combat if things turn desperate!).

The game has a distinct visual style, it uses rtp but it's all black and white that reminds to me the old mac games (like Dark Castle), and was recently used also in an adventure game, Return of the Obra Dinn, that is an adventure about a 1802 ship. But I digress, anyway the graphics are ok, I like the idea despite the fact I find difficult to play for long with a reduced palette (in this case scale of grey), but this was a short game so I managed to beat it in one sitting.

So graphics are ok, and also the music selection is pretty good, most themes are those you have already heard, but others comes from other sources and are fitting and pleasant. Unfortunately the game is not without flaws. It was made in three days, yeah just THREE days, so many aspects are incomplete (like some dialogues that comes interacting with particular things like the prison door, or the chest near the princess that cannot be opened despite her telling to take the items inside), mapping is a bit of a mess, and also the descriptions of the various abilities aren't always clear and it needs a bit of pratice to understand how these works. Luckily the game is pretty easy so no need to waste time fighting too many random encounters or buy all the items and gear available (that are not cheap at all!). 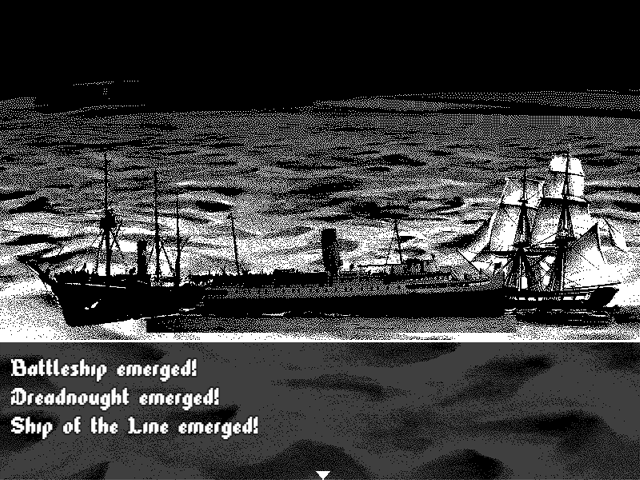 This is gonna be an epic battle (it's me or the Dreadnought looks like the Titanic?)! And it's not even the final combat!

Final Verdict
Ok, I will be clear, this isn't probably e memorable game, it has some balancing problems and looks a bit unfinished in some aspects, anyway it's not unplayable or bad, and possess also a certain charm and some funny part and dialogues that entertained me. It may be cheesy and a bit vague in some parts (the story is a bit of a mess and the ending is quite abrupt) but despite this it entertained me. I liked also the world map because the (small) world is... cylindrical!!! I laso found humorous many dialogues (like that hooded guy that says that they do not allow him to let the players see the other floors of the tower) even if some things are left shrouded in mystery (why no one is allowed to see the king? And why the terrible pirate is a young boy that threatens but never attacks?)... anyway it was not perfect but entertaining for what it lasted! (ok ok, you may say that it's shallow and the game word feels bare bones and almost empty (and this is the truth, like it or not!), but for a game made in just three days I can understand. Also I took it a sort of parody, so not too much seriously).

This get a 3 (liked the days in which it was made) out of 5. Average score for a not so average game that has a lot of nice features (I liked the naval battles!) and some flaws. Still it has a unique style and somewhat it stands out. Probably if it was expanded, more polished and revised it would have become a memorable classic, anyway not bad!