Some Love and some War, but all good!

Hello.
Love and War (act 1, and unfortunately the only act available) ia a classic story driven rm2k3 adventure with some distinct features.
The first is that the story isn't about a predestined hero against an evil tyrant, but a young man and his friends that just finished school and now they start doing some jobs that becomes gradually more important. And then we have the "love" part since quests and combat encounters are interwined with dialogues and cutscenes about friendship and love, of course! 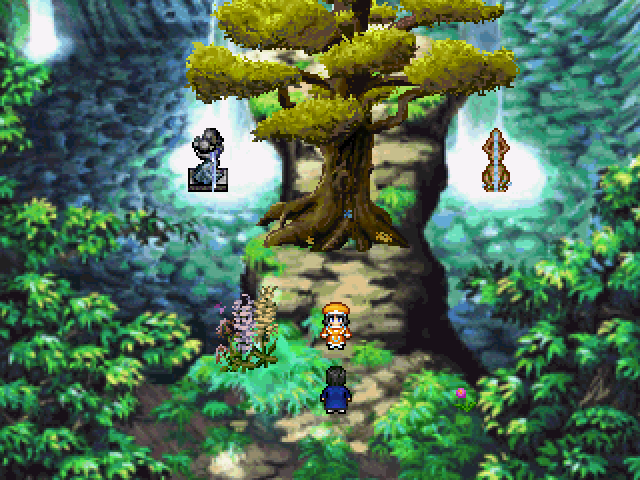 What a nice and calm location... very relaxing

After a prologue about two mysterious characters (that also works as a tutorial) we'll start playing as Ryan Eramond. He is the young protagonist, a good student from a rather well standing family. School is finished, so he will spend his time with his friends Armin and Henrik ("the three compadres"). During the adventure we will not only encounter, but also play as other secondary character, like his childhood friend Lavie and his rival Juno.

From here the story will unfold, presenting gradually various activities and adventures, that goes from simple fetch quests to more complex tasks and investigations that will require exploring and fighting enemies.

Here's a first good thing: combat is not easy but also not so hard that requires grinding. In any case it is important to spend wisely the money earned to improve gear and have lots of healing items since there is no healer in the team.
Henrik is in fact a good swordsman that fights with big swords (strong but with few skills), Armin is a thief that can steal and poison enemies, and can equip two daggers (he is weak but fast and for this reason the best choice as support for using backpack items). The protagonist Ryan is pretty average but has some skills from his sword and gun technique: he has a free special move only available on the first combat round, he can use special cartridges to learn some special shooting attacks (like fire bullet, flash bullet and so on) and he will progressively unlock some new skills. The only disadvantage is that he does not use Energy Points for is attacks, but Ammunition, that is a bit harder to recover.
Luckily most savepoints available in the dangerous areas will restore completely the party (or you can just visit a tavern). 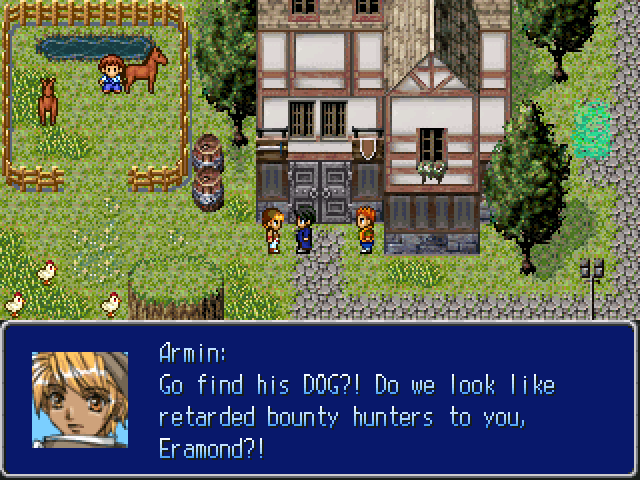 Come on, Armin... you start hunting rats and you end hunting dragons. It's life!

Anyway combat is not the only activity: sometimes it will be necessary to play some minigames to catch a frog or win an archery contest, other times the characters will have to explore a place and look for clues or follow some indications to reach a hidden treasure, and there's even a sort of quiz game that clearly parodies "who wants to be a millionaire!". All these activities merge well in this story driven adventure, just keep note of what the characters say because there is no log or diary that will tell you what to do!

Ok, from here it seems a lighthearted adventure (and fo the most part it is), so where is love and where is the war? Ok, during the story we will learn about the various characters past and feelings (not just of Ryan) through some events illustrated by cutscenes (drawings are beautiful here) and particular little quests in which there is one single playable character and no combat at all,

War... Ryan's adventures will alternate with some unrelated cutscenes about the current political situation of the world. These aren't that long so I won't spoil,
but as you can guess from the word "war" things are clearly going towards a darker future. 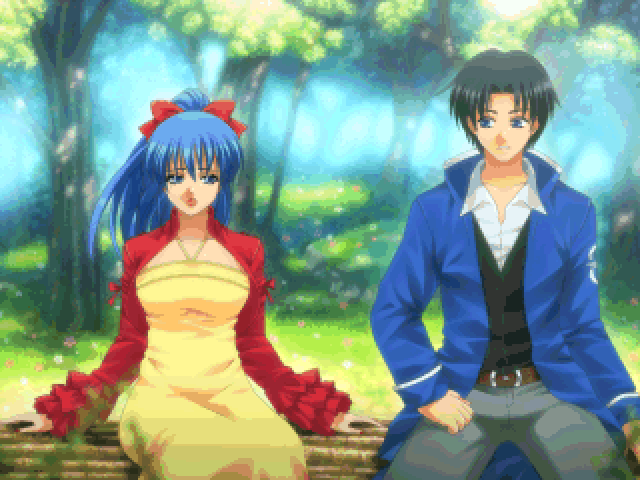 I've already mentioned the nice drawn cutscenes, but also the rest of the game looks good: it's a game about wandering the countryside and visiting little villages (there is just one big town), so maps are quite simple but still well detailed and structured (there are different credible locales and places). Since some places will be necessarily revisited (not only Ryan's hometown but also other places) there will be a sense of familiarity with the places (and still there will be some noticeable changes in some cases).
Despite a certain noticeable difference of style between some charsets and chipsets, the game has a coherent style for most of the time, and in my opinion looks very good.

I also liked a lot the music selection (for example the main menu music is quite good!), sounds and even the possibility to enable voiced characters (even if sometimes the background music is a bit louder than some of the voices).

Finally the story: for me this is one of the strong points of the game since it is interesting and original, and the characters are well written and believable. Some parts are mini side-stories that enrich the narrative with informations about the relatives of the main characters (Ryan, but also Juno and Lavie), explaining their behaviours during the adventure. Oh and there are also lots of useless but entertaining dialogues with friends and townsfolk, and many interactions that aren't mandatory for solving the quests... but interactivity is fun! 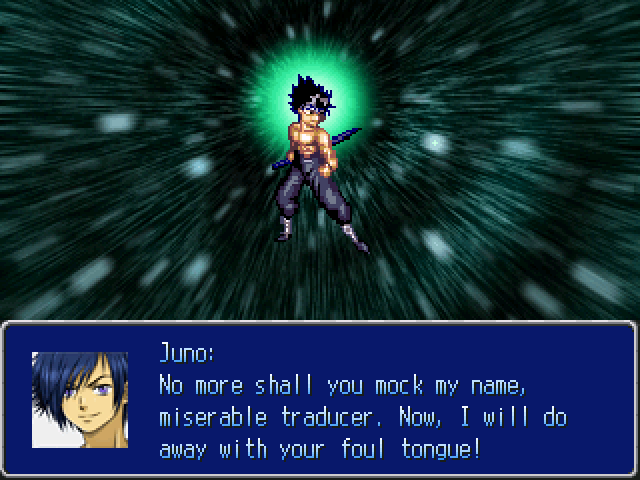 Well It's hard not mocking a guy with a female name that looks like Vegeta...

Verdict
Love & War is in my opinion a great story with many fun parts and situations. Ok, it is not perfect but the problems I noticed are really small: for example the text over the drawings is sometimes a bit difficult to read, and the part in which the party is overwhelmed by slimes or random encounters with mosquitos are not so fun, but if you can manage your items and gear it's doable. I like how the archery contest has some middle save points that make easier winning, and in the end the difficulty is well balanced. There are optional sidequests, hidden treasures and puzzles, and many different activities that make this game stand out. As I played and progresses I felt how the characters were growing, not just increasing their level, but also as persons in their little country.

So there is no doubt that this is a great game with a good balance between narrative and gameplay. It's not for hardcore gamers that want a complex system, tons of equipments or a hard challenge, but it's one of the best story driven adventures. This gets a 4/5, I just wished there was an act 2... but if you did not, play this one and you won't be disappointed!

Close
01/08/2021 10:28 PM
Thank you very much for taking the time to review LAW! I most certainly appreciate it. :D
TheRpgmakerAddict

author=Admiral Styles
Thank you very much for taking the time to review LAW! I most certainly appreciate it. :D

Hey! Happy to hear this. This is a really cool game (some parts like the quiz were simply great!), one of the story driven games I liked most. Story is pretty original and characters are very well characterized. Well done!
Pages: 1