The restoration goes on while modifying things here & there.

What has been restored
1. Farming town, Ryin, is restored which is located direct west of the crossroad zone. Like Eton, Ryin has also been altered for the better.

3. Lumber town Dolle restored. Only one NPC (quest related) exists there for now.

4. Guild quest “Gift gone wrong” can be completed. “Wolf overpopulation” and “Delivery” can be activated but cannot be completed at the moment.


Below is a list of changes/fixes
1. Basic ration effect has been fixed. It only affected the user.

2. Rebalanced characters and animals. Maco receiving zero damage in the starting outfield is as intended.

2. Restart is again required due to few fundamental changes. The game won’t likely be stable until it hits at least 0.1.0.

Close
10/09/2019 07:08 PM
I simply inspected your first area.
You should test your Tiles as you go along, that way you can find the errors in the early stages of development. 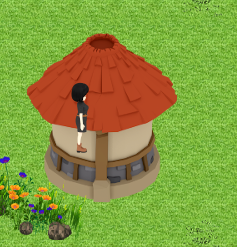 I still think you should consider how big the inside of a house should be based on its outside appearance.
For example, here is a house you did in the first area. Looks like a small one-room house. 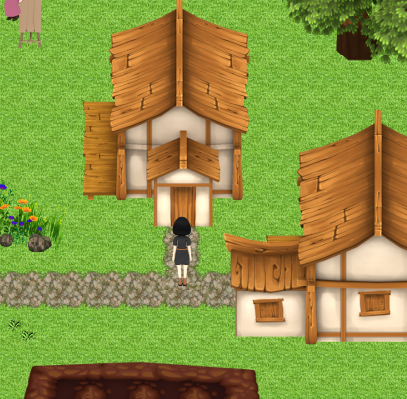 But yet you gave it an excessive amount of space. For a small house, I think you made a shack into a mansion.
I know it is supposed to be a house in a dying town, but the open space is too much. 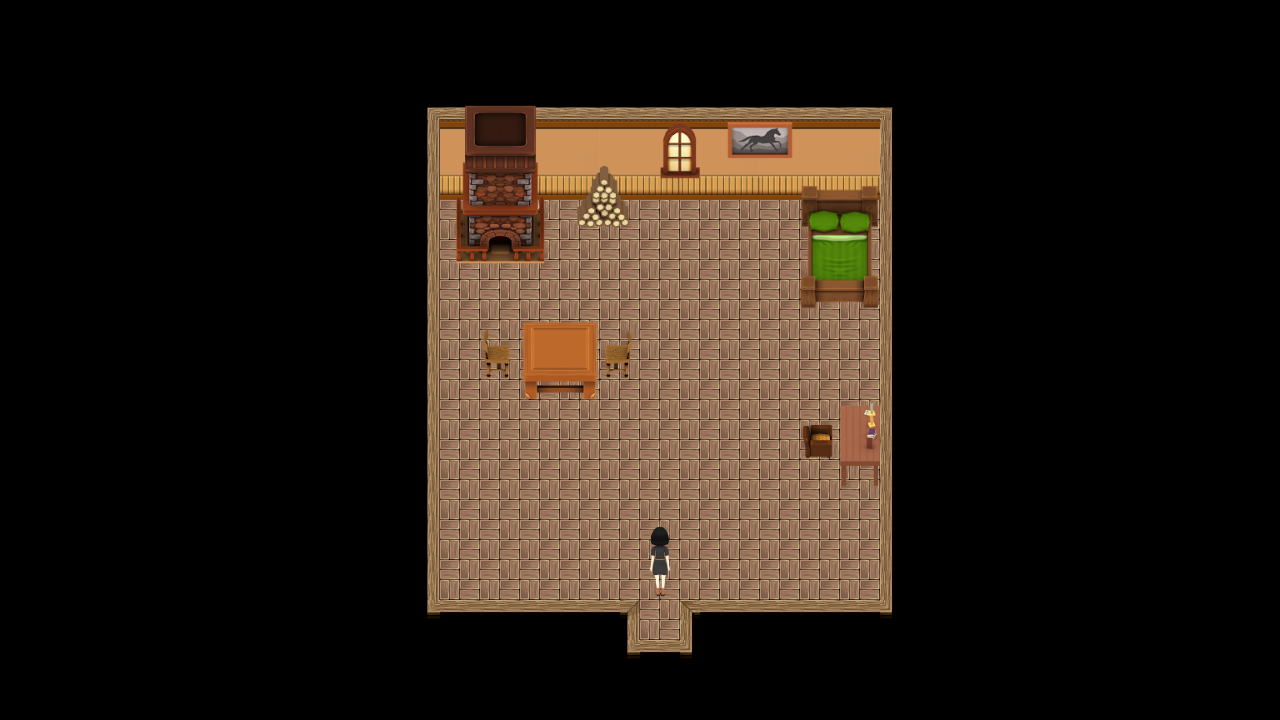 Here is the same house but adjusted to be more proportional to its outside appearance and shape.
(It is a photo-edited image, I did not enter or alter any of your game files.) 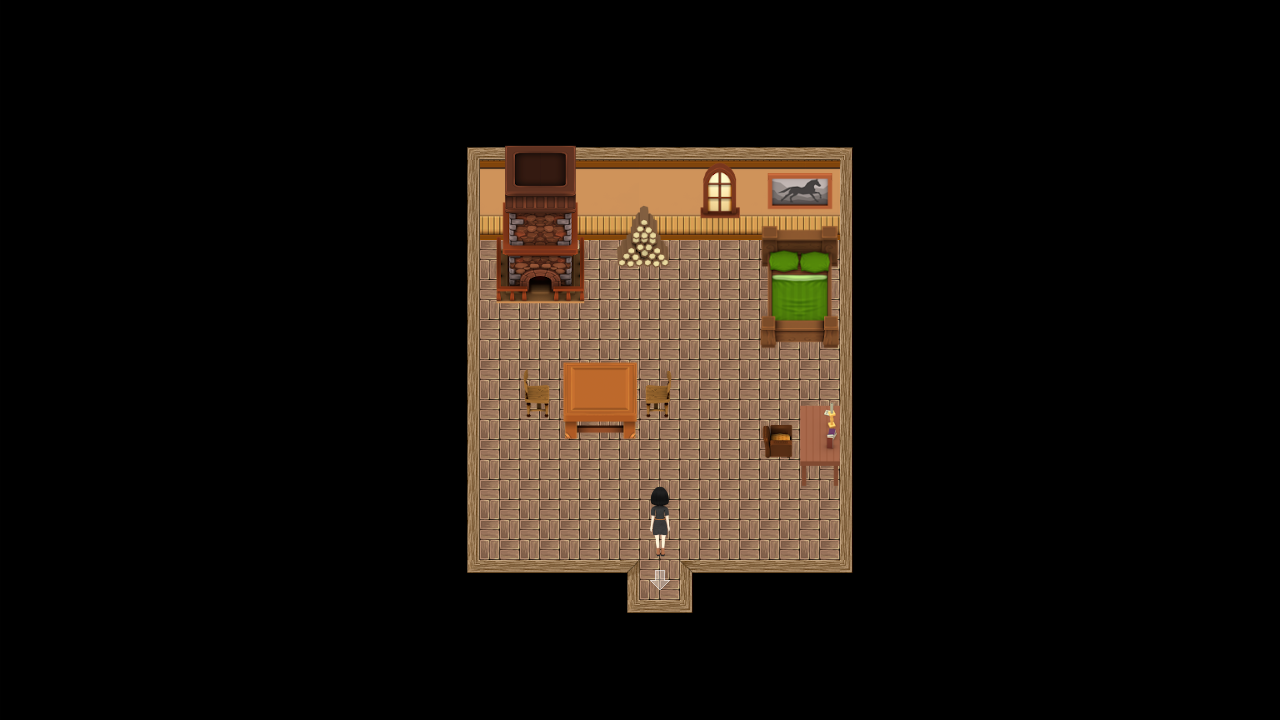 I simply made your house 2x2 Tiles smaller.
And I also moved the painting down some pixels because it was touching the ceiling, which is rather high for a hanging picture.
All your furniture and decorations are still in the room, the room still keeps the general shape of the house, and you still have plenty of open space for the illusion of a "dying town" house.
You have to remember that your character uses Half-Tile movement, so the space feels bigger than it is.
I edited your room border at the bottom in the image, to give you an example of visual concept. Just look between the pictures, you will see what I mean.
And for any door hidden from view in the top-down perspective, you can do two things.
1. Use a small carpet/rug to show where a door is.
Or
2. Use a transparent arrow.
If you plan to use a transparent arrow (like in the picture) but you want to have it animated, you can take advantage of the Auto-Tiles. Why I say Auto-Tiles and NOT Character Graphics, it's because Auto-Tiles would be under the character's feet while Character Graphics would appear in front or above the character.

These are all merely suggestions, you do not need to listen to all of my advice.
Just providing constructive criticism.
Sorry if I seem to be an annoyance.
sura_tc
1445

Well, you see, that's probably the only unusually big house which I will correct.

Have you visited other places? The starting village has less than 0.1% significance. You spend less than 3 minutes in there overall.

The carpet/rug idea is already there.... Just not all houses have it just as it does in real world.
But I will never place an animated arrow to indicate where the exit is. I am not going to treat players like idiots.
As an old-school RPG player, I always disliked extreme hand-holding shown by recent games.

I welcome your criticism. As a solo dev though, my top priority is preventing critical bugs first - get the game going, aesthetics later.
Widderune
30

Close
10/10/2019 01:12 PM
Okay, I understand that you do not want to use the arrow.
But you should definitely consider the insides of your buildings.
I still feel that Maco's House and the Shop are too big. They both feel like there is too much open space, especially in the lower-half region of every room.
If you just trim off some of the height and width of the rooms, keeping the general shape of how the buildings appear outside, you will find the rooms still have all the open space that you need.
I'm not telling you to make a Pokemon house (which are good to use as an example on size and shape), but even Pokemon houses have plenty of open space for small buildings.
I'm just going with my gamer's gut, I feel your inside room is too big.
I am mainly suggesting this, so you can get used to building your inside rooms consistently but without the need of others telling you "the room is too big".
sura_tc
1445

Not sure about that.
I've had feedbacks from both devs and players before and there was a pattern.
Devs tend to care for things players don't tend to care.
The space aspect is one of them. I've never had players telling me that they felt rooms were too big. But devs certainly have told me what you've stated.

I am more close to players rather than devs which is why we are not quite seeing eye to eye on some things.

The reason the game runs on 720p is simple. While you say it's big, for me, I am quite sick of tiny looking RPGs. With my eye sights getting worse as I age, I just want things to be larger in general scale.
That's why I chose 40x40 and why character sprites are even bigger.
Widderune
30

Close
10/11/2019 03:10 PM
I'm not complaining about your choice of resolution (which is great) or your tile size (I am using 40x40 on my own game creation), I'm not even complaining about your character and environment design (which look amazing by the way), I'm just saying that your inside rooms exaggerate their size compared with the outside shape and appearance of your buildings.

You did Maco's house fine. 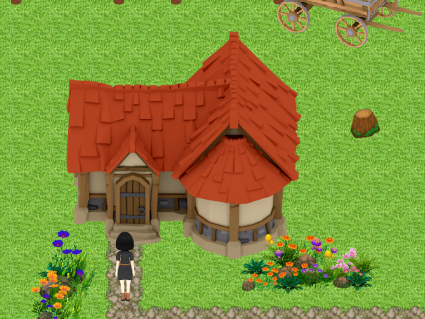 But your outside shape compared with your inside floor plan, it doesn't seem quite right. Your stretching the space a bit and you have to think of it as a home your designing, not merely an area for players to move around in. 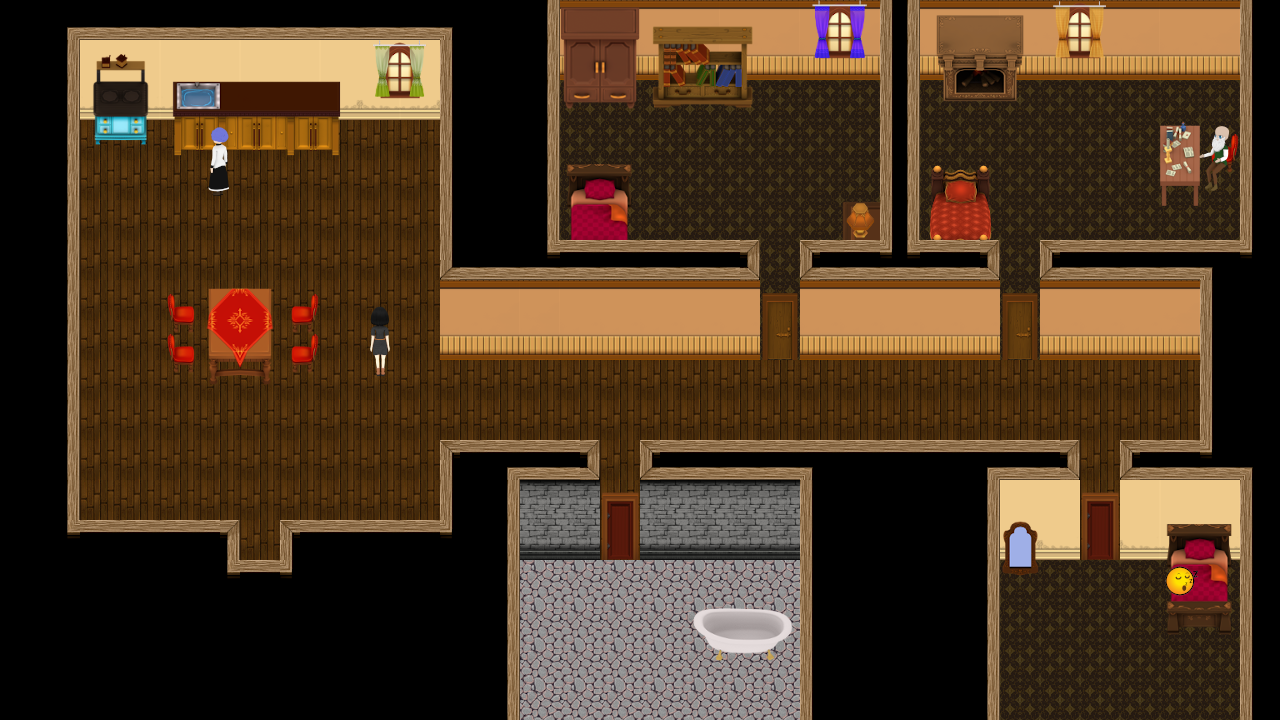 I think you should go with more of a floor plan like this. 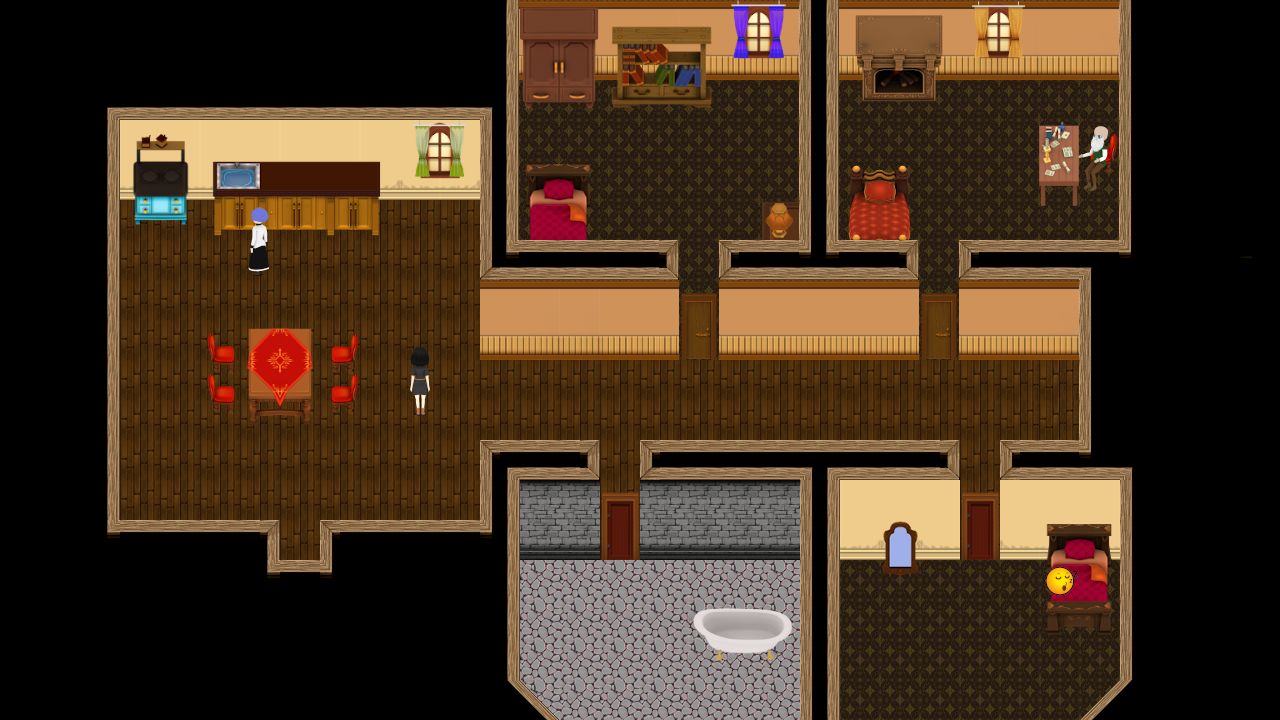 It works more with the shape of Maco's house, and you have to keep in mind that you have a "T" shaped roof that tells the player it should be a "T" shaped house. And since Maco's house has a tower in front, the rooms in that area should have rounded corners (more convincing than square rooms in a round tower).
You may be a game developer, but you have to have a home-design mind for how a house's floor plan structure should appear inside compared with its outside shape.
You just need to keep the inside shape and size proportional to the outside of the building.
I'm sorry if I sound like an instructor with a tutorial, it just tends to come out that way.
sura_tc
1445

Widderune, while I see your point, that house had its own reason for betraying its own shape. I shaped the interior the way it should have been, only to realize later that I could not fit Maco's room into it.
So, in the end, it became that. You won't even be able to enter the house soon once the starting quest is done.

It is not a realistic game. While I do adhere to certain aspect of rules, even if it's "not right" as you put it, it's not a game breaking element.
I will remark this though; you are obsessed on things players don't generally care. Again, it is a fantasy game where people cast magic and Gods roam around, enjoying life.
What if an interior is magically larger than what it appears on surface? That's fantasy. Japan wouldn't have its anime without fantasy.

What you are trying to do is trying to install strict realism in a fantasy game.

Additionally, as I mentioned before, the starting town has no significance. If you were to comment on the interior of the guild for an example where players will visit frequently, I will be more inclined to alter.

In conclusion, I am not saying you are wrong. But your design philosophy does not align with mine. I am quite carefree while you are overly strict. It's like water meeting oil. We are never gonna see things eye-to-eye.
Widderune
30

Close
10/11/2019 05:07 PM
I disagree.
Realism or fantasy, there is always guidelines. And even with rooms, they apply.
All I can understand from you is that you do not take advice or constructive criticism well.
And on that note, I do not see why I should even bother explaining myself further to you.
So, farewell and good luck with your project.

Well, we will just have to agree to disagree.

I did take your advice to some degree and adjusted rooms. But your vision and mine are too far apart and, to be brutally honest, you pushed your idea on me too strongly, basically to a point of condemning my own.

If anything, by seeing that you wish to end talking to me, it's you that's taking my criticism badly.

I hope you will at least reply to my e-mails when questions arise about the engine itself.
Pages: 1