I’m here to…I really don’t know, but I guess this is part of the healing process, but…if you’ve played “Voices of Friendship”, there is a part where you come across a bunny that could talk.

Well that bunny was real, and his name was Bifune and his owner…was me.

On March 21, Bifune passed away in my arms from a seizure due to his organs failing, and I’m not going to lie, it’s been really hard to deal with. I’ve taken a break from creating due to this, and for that, I am sorry.

Bifune was priceless, and was always there either at my door, or under my feet while I worked on our games, especially VoF. He is irreplaceable, and even though he was just a rabbit…he was simply the best thing that had came into my life. No matter how much I stressed about a game deadline, he was there to calm me down. He will be truly missed.

I just wanted to put this here for you guys to let you know that the little bunny you encounter is much more than a game character, he was my heart. I hope even in the game, he makes you smile, as he did for me everyday.

This is Jen from Jen&Sis…signing off for awhile.
Bifune Conejito…Rest in Paradise my sweet boy.

We have added a "Nightmare Maze Game Guide" to the downloads. This guide was originally started in December 2018, and was suppose to be a FULL walk-through guide, but was abandoned due to people wanting to know more about the death log and the VoF Endings. That's the reason why both of them look VERY similar. We didn't want this guide to go to waste, so we decided to go ahead and release it.

We really hope this guide helps people out who are having a bit of trouble going through the "Maze of the Lost & Forgotten". Trust us, the original maze was WAY harder to get through, so consider yourself lucky and kudos to the ones that actually figured out the original maze themselves.

Thanks again for having interest in "Voices of Friendship" and this is Jen&Sis, signing off!

I bet you all are like, "I thought they were done with VoF!?"
Well, we thought so too, until we were told about a bug that hinders progress. But no worries, it is all fixed now, and ready to go. We have updated the v 1.2.4.5 patch as well, which will make the game v 1.2.5.

The changelog has been updated and these are the fixes that have been added (v 1.2.5):

We also made a patch for v 2.2.4, because there were some fixes that needed to be looked into, and we also did some updates while we were fixing the bug.

The changelog has been updated and these are the fixes that have been added (v 2.2.4):


Now, we are hoping this is the last update we have to do, because we want to start working on other projects, but like we always say, if there is a bug/glitch that prohibits your play-through, please contact us through the comments, or you can contact us directly at jen.sis.productions@gmail.com.

This is Jen&Sis, signing off.

If you have time, please check out a special video that we made. We just wanted to show our appreciation!

Love ya'll and this is Jen&Sis, signing off.

Hello Everyone!
A lot of people are asking us if we will be making a VoF2. We would love to because the story is already written, but really, the choice is yours. If the good out ways the bad, we will make it after the next few games that we have in mind are released. We just don’t want to work our butts off on a sequel, and then no one plays it. So let us know in the poll!!!

Click the link below to cast your vote or if you don't want to vote, you can leave a comment with your opinion:

The Voices of Friendship Game Guide has been updated and complete. Now, when we say updated, we had to scrap the idea of doing a full walkthrough of the game, because we had a few people tell us that they would prefer a game guide that just explained ALL the Death Logs and ALL the Endings, so that is what we did.

If you want a FULL walkthrough of Voices of Friendship, we would suggest checking YouTube. There are a few YouTubers that have completed the game, so you can use those for help, and you can also ask us, because we are happy to help as well!

We hope this game guide helps everyone and now, it's time to go to bed. We're exhausted. This is Jen&Sis...signing off.

VOICES OF FRIENDSHIP v 2.2.4 IN NOW OPEN TO THE PUBLIC!

HEY EVERYONE!
There is no time for formalities, because we are excited to say that VoF is ready to rumble!

We apologize for the wait, but man, we have fixed SO MUCH STUFF that we are confident that we will get a positive feedback about the game.

Now, we are sad to say that if you already have the game, you won't be able to port your save files over because we had to abandon some of the scripts we were using and add new ones. So, we are sorry, but most of the changes we made are in the beginning of the game, so don't feel down. Just finish your play-though on the current game file that you have.


Now, we hope that this update pleases the masses, because we have other games that we need to work on. (lol) If all goes well with v 2.2.4, we can get back to updating the game guide and adding more pages. But seriously, thank you all for standing beside us this whole time. We know that VoF wasn't perfect, but we hope this version makes up for it.

That is all that we have you today, so this is Jen&Sis, signing off.

Hey everyone. We feel so stupid. Ugh...
We just found out that the v 2.2.4 started on a map that is wasn't suppose too. (Due to us rushing) We apologize for the rookie mistake. If you downloaded the game and you start on a weird map, then just re-download the game.

Here is what it fixes:

We are here for an important announcement! We have taken the VoF download off this page, because we are working on some BIG changes, due to comments we have heard about the game. We don't want people to continue to download the game and have issues with it, so we have taken it from the public until the updates have been made.

Please be patient with us, and we hope that the changes we make to VoF will make it a better game for people who play it in the future! 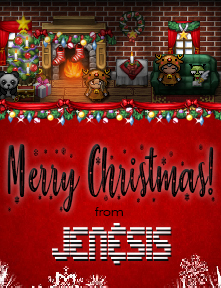 Thank you so much for the support, and we hope you have a marvelous Christmas with friends and family!
Pages: first 1234 next last