Story: You play as Kujiro's fiancée (I don't know why Google insists that's misspelled. Fiance is the man.), Himeko. On your way home from school on the day of Kujiro's proposal, you find your way to a mysterious house that's never been on this path before as a fog instantly appears. Instead of identifying this as the rip of space and time it so painfully obviously is, you just assume you've never seen this huge estate before. On this road. You travel all the time. That led straight to the front door. Because sure, why not? You go inside and discover, to everybody's immense surprise, the house is haunted. Himeko doesn't want to go in, but Kujiro's eager for some paranormal investigation. Attempting to leave, you find you've been removed from spacetime. Of COURSE, you have! I swear, it's like Kujiro and Himeko have never played an RPG Maker game, before. 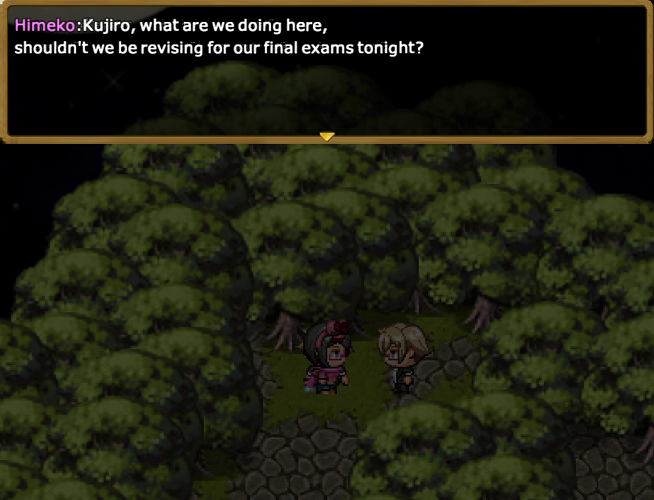 
Writing: I will not discuss the grammar since this was clearly translated from another language (wild guess; Japanese, since the story takes place in Tokyo) and you know exactly what to expect in that regard. I will say that there are definitely worse translations out there, so it's not really bad. If you couldn't tell by my story section that I felt that this game was extremely by-the-numbers, here I am explicitly saying it. The really big problem I have with RPG Maker horror games is their chronic predictability, and this game is no exception. You basically explore the story by piecing together a ripped up exposition fair-I mean-diary. By ripped up, I mean that there are a few pages here, a few pages there, because in these games, ghosts love to rip up relevant books and leave the next relevant section in the next relevant area. Of course, as you piece together the diary, a new area of the house becomes available. This is all fine, until we reach the point where when you read a piece of diary, you hear a door nearby unlock. HOW CONVENIENT! These ghosts that are trying to possess and kill you are very accommodating. I mean, it's not like they can just use their door locking and unlocking ability to trap you in a room with no way out and then try to possess you when you're cornered. The story never says that these ghosts and demons need you to go through some ritual. I mean, it's implicit, but then the story makes the mistake pointing out that the demons are already on the loose and are just trying to curse everyone they can. Even better, they can chase you to the very weapon you need to defeat them. It's almost like they want to lose! 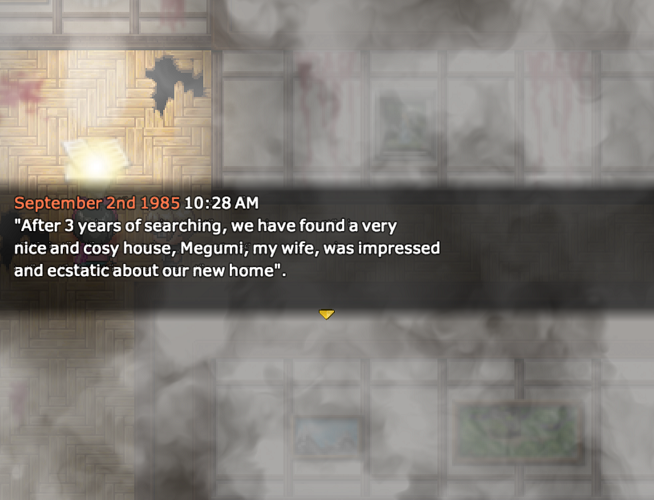 How could he see it through all of that fog?


Where the writer succeeds is in building emotional bonds to the characters and playing on that bond. The story, as it plays out between Himeko and Kujiro is very well done with some very strong story beats. Is it great? I wouldn't go that far, but I would say that it does a good job at drawing out the intended emotions that go along with Kujiro's and Himeko's relationship, even though some of the moments between them are a bit cheesy. If these weren't video game characters, I'd absolutely accuse them of overacting, particularly in their most emotional scene. In that scene, Himeko even has a monologue in which if the developer had the technical prowess, I swear, the character would throw her arm up over her head to express distress and sadness like in stage plays. It's the kind of cheesy but fun romance you can't help but enjoy. You care about the characters and though the game probably won't scare you, though it definitely tries, you will certainly be scared for them.

The story beats come out of nowhere. This does not build an atmosphere for me. I couldn't accept a house simply appearing out of nowhere in real life, and I wouldn't expect a video game character to, either. It's a situation where the writer is simply dropping a what if scenario on our laps and then doing absolutely nothing to construct it. The fog just there like someone flipped a switch, and the dialogue even says it. Why not just have their usual path build up with fog? It's a lot more believable than the house just suddenly appearing out of nowhere. The presence of the fog can lend doubt to the character's certainty that they had taken the right path. This game never gives them that chance.

Another thing they do well is presenting the ghosts. They aren't just thrown at you out the gate. The developer lets you get used to exploring the house and lets you get used to the somewhat cumbersome way the plot progresses. The game lulls you into a false sense of security and even after it declares the ghosts, you still feel like this game could just be a visual novel, so it comes as a surprise when you hit your first game over screen, or it would if the game didn't make the mistake of warning you before hand. Warning the player, I feel, completely undermines the tension. The reason for warning the player is obvious: save points are few and far between and dying far from one can be a bit frustrating. The solution to that, of course, is obvious; save points and save reminders before potential game overs. And put save points and save reminders in spots where the potential for game overs doesn't exist so the player doesn't automatically associate them with tense scenes. 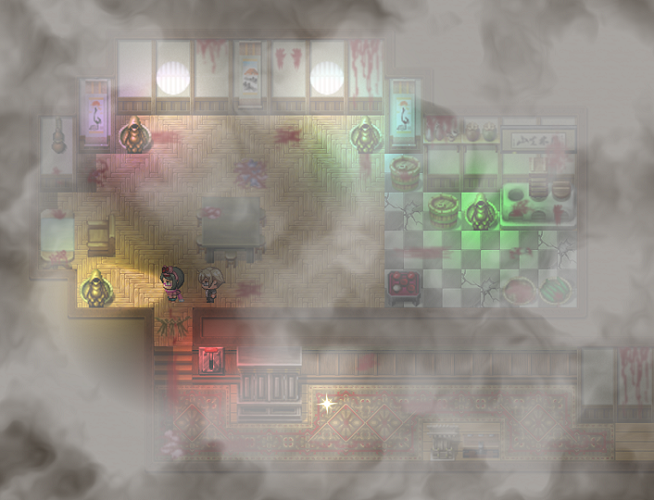 Feng Shui requires an electrical switch? I've been doing it wrong all this time?


Gameplay: For the most part, it's exactly what you'd expect from a horror game. I described most of it in the writing section, but to reiterate, you find pieces of diary, notes, and such scattered around the house. Until you do, the next area is locked. When you finally find the diary fragments, a new area unlocks. Because of the way this is presented, the game feels very much like it's on rails. There's a certain way to go, and there's no point going back. Exploring is not what this game is about. Occasionally, you will come to points in which you have to flee ghosts. This is as simple as running from area to area until they stop chasing you. The first time you have to run a ghost, you acquire the spirit camera. First, the game explains that this camera is from the 1600s, and I think historians around the world would like a word with the developer since the camera was invented in 1816. When you encounter a ghost with this, you will enter a strange combat scene where you are looking through the camera and trying to take a picture of the ghost. This is extremely cumbersome to figure out and will take several tries to understand what to do, in spite of the tutorial. Once you do figure out what to do, using the camera to defend against ghosts is incredibly easy. I didn't lose a single circle of health once I figured out how to work the camera, and I got a deadly shot almost every single time. This mechanic definitely needs to be expanded upon, because as it is, it's a simple, quirky system that is interesting the first time and becomes pointless every other time. 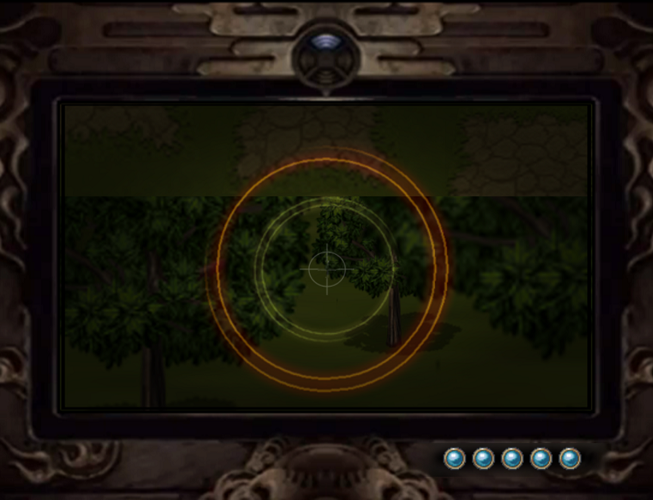 Damned ghosts cutting the tops of trees off!


Graphics: All fairly basic, and all VERY hard to see. The fog overlay was just too much, and except for the intro, there isn't an inch of the game that doesn't use it. The forest scenes seem to have some parallaxing because those trees definitely aren't on the tile grid. That looks very nice. The rest of the map is ordinary and it all looks fine, though I find the architecture to be a bit confusing here and there. If the fog wasn't so obnoxious, I could say definitively how good the mapping was, but with that damned, horrible fog, I couldn't see anything except a properly mapped set of tiles. About that fog: it's absolutely pointless. It doesn't do anything for the gameplay. It's not even used to hide enemies or obscure the path. It's literally just there, doing nothing except making it hard to see what you're doing.

Sound: As a horror game, this uses sound effects and music to excellent effect. I can't say anything bad about the sound in this game.

Conclusion: It's an okay game. If you've never played an RPG Maker horror game before, this one's as good as any, but if you have, this is really just like any other horror game made in RM.

author=the piano man trademark
Horror fans will probably like it

Maybe not. One of the main reasons I mentioned not liking it in my review is because it's way too similar to any other horror game with little to make it stand out.

I actually don't think this was translated from Japanese. Not only have I never seen it on japanese rpg maker sites, I think the developer just took inspiration from japanese culture. A lot of j-horror and anime fans do that quite a lot. I know because I used to, and I'm a cypriot.

author=piano tuna can
It's almost like they want to lose!

I suppose it might make sense considering most of them are just possessed and maybe they want their souls to be saved.

author=pano cano tamo dom
First, the game explains that this camera is from the 1600s, and I think historians around the world would like a word with the developer since the camera was invented in 1816.

lol, lost it at this


This was a really solid review, piano. Found it really interesting to read where our opinions differed. Looks like we both had completely opposite experiences to one another, but you still got your points across excellently.
jai2016
460

Close
04/05/2019 11:38 AM
The term "camera obscura" also refers to constructions or devices that make use of the principle within a box, tent or room. Camera obscuras with a lens in the opening have been used since the second half of the 16th century and became popular as an aid for drawing and painting. The camera obscura box was developed further into the photographic camera in the first half of the 19th century when camera obscura boxes were used to expose light-sensitive materials to the projected image.
:P
Liberty

jai2016
The term "camera obscura" also refers to constructions or devices that make use of the principle within a box, tent or room. Camera obscuras with a lens in the opening have been used since the second half of the 16th century and became popular as an aid for drawing and painting. The camera obscura box was developed further into the photographic camera in the first half of the 19th century when camera obscura boxes were used to expose light-sensitive materials to the projected image.
:P

I stand corrected! I will stand beside what I said in the review though, because in the game, you gave us a camera. Camera obscura is something very different.

jai2016
Ty for the review, helps me a lot the bits that I did wrong and what-not.
Was only a short time making this game, was trying to see how to make a horror game using RPG Mv.

No problem! I always try to give the best advice I can think of when writing a review.
Pages: 1