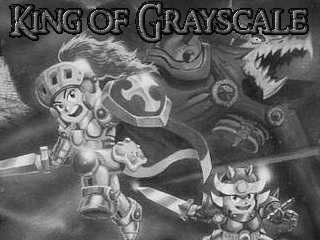 Not so Black or White 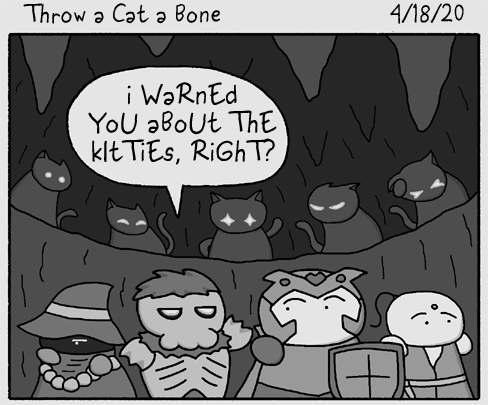 King of Grayscale is a retro, fairly basic RPG made for the RMN Birthday event back in 2017. It’s not a huge game by any stretch, but it packs a lot into a small package and it kept me occupied a bit longer than I expected. Its scope is limited, but it makes the most of what it has and is generally solid all around.

It mostly uses sprites from a variety of old Final Fantasy games. If you’re a fan of the early days of FF, chances are you’ll recognize a lot of the visuals. However, keeping with the gimmick of the title, everything is in grayscale. There’s no color to be had anywhere, not even that old Game Boy olive green. It does result in things looking relatively bland, but it doesn’t inhibit the gameplay at all, so it’s just an aesthetic choice. It might have gotten dreary in a longer game, but for the size it is, the style works.

Sticking with the retro design, all the music and sounds are 8-bit. BGMs come from a variety of old-school sources while SFX are ripped from Aladdin and Shantae. It all fits together just fine and nothing clashes or feels out of place. It’s nothing groundbreaking, but it does the job just fine.

The story of this game is suitably simple. You play as Ashe, heir to the throne of Grayscale. At the start of the game, he’s betrayed by his brother, Lucian, and exiled for treason. It’s your goal to reclaim Castle Grayscale and set things right once more, but you’ll need the help of all the lesser villages if you hope to stand a chance against Grayscale’s army.

The game is set on an island nation, and you can see almost the whole thing from the moment you first hit the world map, so the game’s scope is on display right from the get-go. You make your way around the other villages, helping them out with various problems and recruiting more people to your cause. In spite of its shortness, the game uses whatever opportunities it has for characterization, and Ashe chats with companions during most events that take place. I’m pretty sure the dialogue is also affected by who’s currently in the party, so there may be some replay value to see what others have to say in certain scenarios.

The cast themselves are nothing ground-breaking, but they’re just interesting enough to get you through the game’s duration. Their dialogue is written well and they don’t feel too samey. It’s all pretty cliché, but it’s presented well and enjoyable regardless. There are very few typos in the whole thing; I only noticed a few missing apostrophes once in a while. The only noteworthy one I found was when Lucian’s name changed to Julian for a single text box.

The game uses touch encounters and allows you to fully clear any area you go into. It incentivizes you to fight off every monster by allowing fast travel through that location once you’ve finished everything off. Only a couple dungeons are dead ends with nothing beyond them, so it’s useful to defeat every foe you see. If you ever need to grind for experience, each area also has a battle arena (marked by a skull on the map) where you can fight as many encounters as you want. The party eventually gets too large to include all members together, so having a place to catch up is helpful.

Combat isn’t too complicated. Most areas only have two kinds of enemies to fight, and you’re given a decent variety of options to get by with. You could probably mash through most battles, but things will go quicker for you if you bother with special abilities. Most dungeons have some gimmick for how best to attack each enemy, like some having high defense or special resistance. In particular, there’s a cave full of undead that are immune to either physical or magical attacks (ghosts and skeletons respectively), so you have to play along to hurt them. That said, it did feel like the game could use more enemy variety. Most things attack in pairs, and once you’ve fought three encounters, you’ve seen every combination of them. I think a third enemy type in each section would’ve done some good.

The party can have up to four members, and there are eight playable characters in all. Ashe can never be changed out, but he can adjust his companions at the inn of any town (where they can also heal for free). Each member has their own shtick (rogue, healer, spell caster, monk, etc.) and most of them have special ways of obtaining new abilities. For example, if you visit every town’s church with your healer, she’ll pick up a new ability after praying in each one. Likewise, your rogue has a contact he can ask about new skills, so long as he’s in the party. It’s a clever enough gimmick for a game this size, but there are some that can be a little trying. Your spell caster can learn new spells by reading books, but he can’t read them if he’s in the party. You have to go to the inn, switch him out, talk to him in the inn to give him the books, then you can have him rejoin the group. It could be more intuitive, but it’s also not that many extra hoops to jump through. Of special note is the skeleton party member who doesn’t learn any skills, but like the enemy skeletons, is immune to all forms of magic (even healing). There’s a surprising amount of variety for how small the game is.

The main quest is relatively short and it could probably be beaten in one or two sittings. However, there’s also a little bonus challenge you can do involving a hidden shrine and a series of secret bosses. Some of them were actually tough enough to take me down on my first attempt, so the game can bare its fangs when it wants to. Overall, it’s well balanced and not very taxing to play.

In a lot of ways, King of Grayscales is like a bundle of RPG essentials. It has most of the standard features you’d see in a larger game, and makes good use of them. There’s a lot packed in here, and it’s well worth the short duration to play. It may not be too remarkable compared to other RPGS, but it accomplishes what it set out to do and it serves as an air-tight experience. There are certainly worse ways to spend an afternoon.

All things considered, I give it a...

4/5 A generally solid game that doesn’t quite stand out.

Close
04/18/2020 06:16 PM
Thanks for the review, Hali! It was a lot of fun watching you play. And yes, the dialogue does in fact rotate around who you bring with you. I forgot to mention there is a very minor 'relationship' aspect of the game, which plays out right before you siege the castle - you ended up with Podo. Haha!
halibabica