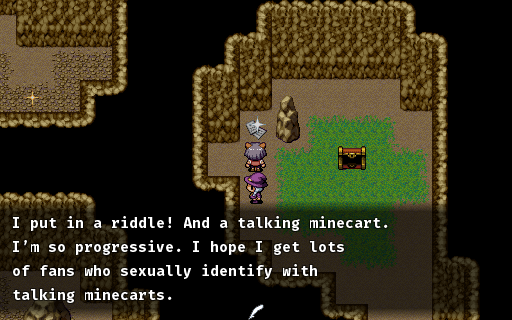 craze wanted me to tell you this about his localization

we're still working, maybe out in like a month or less? i hope?

i've tweaked enemy stats and xp drops a lot so that bosses drop like 90% of your xp gains throughout the game (dead girls now get 75% xp instead of 50% xp too, for reasons i won't get into unless you really want to know about my fixed party paranoias) -- ultimately this means that there's less of a disadvantage to running unless you need money, and also that i can make enemies a bit nastier because 1) i have a better idea of power levels and 2) mooks are, again, challenge by choice now

does that mean this game doesn't have random encounters? hahahahahaha

tch, here's a copy if you insist

My1stGamev0_34.zip has been uploaded for everybody to try?

doesn't this mean it's not a limited edition any more???? tora c'mon wtf