2 reviews
Save to Dropbox
Today, the art class is having a field trip. As 8 students and their teacher set out to a remote forested area for a nice picnic, what they do not realize is that one of them is a killer, and as one of the students wind up dead, the rest must fight for their lives before they become the next victim.

Bloody Trip is a short murder mystery made in less than 10 hours for RMN's 10th birthday event.

Features:
-A murder mystery! Who doesn't love those?
-Retro graphics!
-Two modes: Serious mode for those who want an actual decent experience, and meme mode for those who just want a bullshit comedy.
-Only two maps!
-About 10 minutes of gameplay time. Wow, very long.

Characters:
-Stanley the Protag
-Moby the Nerd
-Marcus the Other Nerd
-Angela the Bitchy Cheerleader
-Bill the Bully
-Atticus the Athlete
-Bethany the Social Butterfly
-Ethelyn the Mysterious Girl
-Miss Blythe the Teacher

Some more info:
Bloody Trip was the first ever game I actually completed, and as you'd expect, it was pretty damn bad. There WAS an attempt to make a quality remake of this at some point, however it never got finished. However, I had a lot of fun making this remake, even though it's probably only a tiny bit less shitty than the original. The game was made under 10 hours for an event so don't be too harsh on me :P

Oh, also if you're only planning on playing the game once I'd recommend Meme Mode over Serious Mode. The ending is much better, and only some of the dialogue is different, all of the crucial stuff is still there.

!MAKE SURE YOU HAVE THIS FONT INSTALLED!
http://www.1001freefonts.com/november.font

Graphics:
The aesthetics were really nice (the retro graphics and font and simplistic menu). Maybe some weather effect/overlay would've been nice!

Story/Game-play:
Not much lol. To be honest, all I did was walking around aimlessly, talking to the characters (who I never really did get who was who lol) and trying different stuff when the "select evidence" menu popped up lol. Eventually, "figuring out" the mystery. Maybe, it was my fault for not analyzing the clues in the menu as thoroughly as I should have (but it was faster and less effort this way :D!). I'm sorry, I'm not used to playing much of this kind of games xD
Oh, I laughed hard when the culprit said "Okay, I did it. I'm sorry." xD! Which I gotta ask: why there was a need to kill the others too lol? He'd have gotten away more easily with just one murder :p or not?
Initially, I thought it was the teacher who did it :p

Bugs:
Nothing, really. Just you forgot to put "Direction FIX" ON for the bus :p

Just thought I'd let you know of my experience with it!
Frogge

I didn't really see the need considering it's just set in broad daylight, I didn't want to ''over-fancy'' the game.

The RTP music was actually intentional. At first I was making the game intentionally bad and I thought the RTP music was perfect for that. It even gets made fun of in meme mode!
Ex: When you first come to the picnic and talk to the teacher she says ''what's with the terrible rtp music, it's not even retro''

Oh, great idea. Will definetly do that if I ever update it.

Each character actually has a different colored name tag to make them easier to tell apart, though I guess that wasn't too useful in the end.

author=AkumuGames
Oh, I laughed hard when the culprit said "Okay, I did it. I'm sorry." xD!

His dialogue in the serious mode was actually kinda rushed since the main ending I planned was the meme mode ending.
Show
In meme mode he says ''I'm not going down without a fight!'' and turns into a giant, but the other characters beat him with the power of friendship.

author=AkumuGames
Which I gotta ask: why there was a need to kill the others too lol? He'd have gotten away more easily with just one murder :p or not?

author=AkumuGames
Just you forgot to put "Direction FIX" ON for the bus :p

Yeah, I found that bug while playtesting too but completely forgot to return to it afterwards >.< I also realized I forgot to fix a bug at the ending discussion where Bill's name tag appears in red instead of blue just after uploading the game. I'll fix those issues if I ever decide to update the game.
unity

BTW, you don't have to ask people to download the font with VX Ace. Just make a folder in the project called Fonts and put the font in there, and the game will look for the font there and use it even if its not installed on the person's computer. 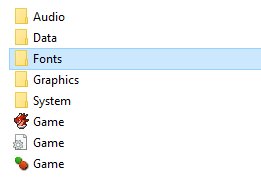