A mystery of murder under time constraints 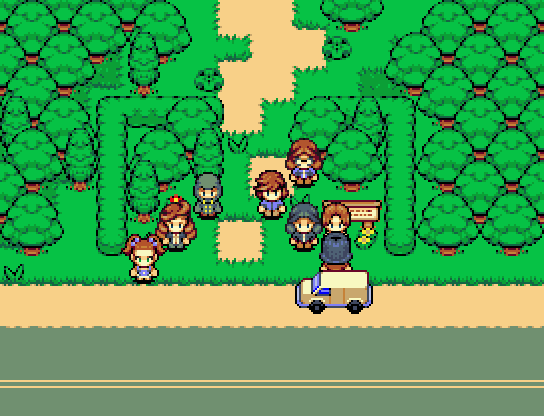 Bloody Trip is a murder mystery made by Frogge for RMN's 10th birthday game jam event, an event that encouraged developers to create something in 10 days to celebrate the site's 10th anniversary. There was also a variant where you could create a game within 10 hours, and this was one of the 10-hour games.

The game consists of a meme mode and a normal mode. The teacher takes her class on a field trip, and you control lead protagonist Stanley, who first tries to find his best friend Moby. As you explore the foresty area, you realize that most people don't say much at all. They say sentences, but what is contained within the sentences is no useful information. A girl shouts, "Don't fall in the water!" when the main protagonist is simply walking past the lake and talking to the girl, and by the time Moby dies, we don't yet care about him. The game, due to the 10-hour constraints, fails to build suspense.

But I can see where Frogge was going with this. There are games such as Happy Birthday and others that use the murder mystery type to create a compelling narrative. But given the time constraints, it seems like it was too tough a task to build a mystery that had compelling characters. I felt at times that characters spoke out of turn, and even when there's a dead body nearby that someone murdered, they would speak cordially with each other and act weird. But that seems to be a symptom of the rushed nature of the story written. 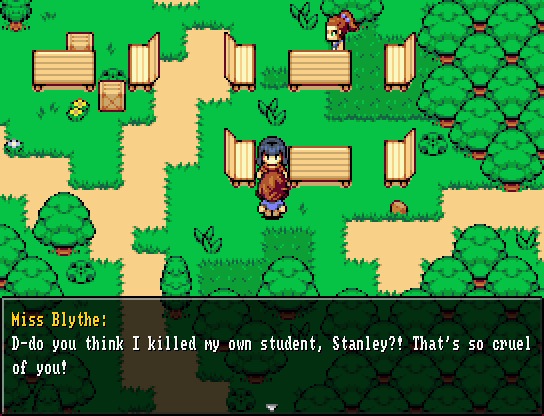 When people start teleporting, it's hard to know what's happening. Despite the restrictions of the 10-hour period, there were still moments that I felt could have been written a lot better, for characters to behave in realistic ways. But the saving grace of the game is its final sequence, where you build one piece of the mystery at a time in the correct order in order to solve the mystery, based on the clues around you. That was a thrilling sequence, and if only the clues had been set up with a little more conveyance, it would have elevated the game even more. Even though I found it hard to draw the string of pearls together, it was still satisfying to select the correct clues in turn, even if in my case it was mostly trial and error.

All in all, I think that Frogge intended for this game to be a quickly made not-so-self-serious entry, and at that, the developer has succeeded. Perhaps in future we can see them create stories and characters that will engage and intrigue us to no end. The mapping is very good, and the tilesets help reinforce the modern setting. However, this game seems to have been made at the sacrifice of its constraints, without which I feel the developer has a lot of potential to do greater things.

Close
06/15/2017 10:52 AM
Haha, 2/5 is EXACTLY the rating I expected this game to receive if it was reviewed. I completely agree with you. As you said, it was hard making compelling characters with the time constraints, and libby was able to point out a LOT of things that didn't make sense in her stream. I want to update the game at some point, however it probably won't be a major one, only a few bug fixes and extensions to meme mode (libby mentioned in her stream that it was almost identical except for the ending)

Funnily enough, I went for intentionally bad with this game at parts, mainly because as far as I remember, the original was terrible yet entertaining.
Pages: 1