Bloody Trip is a game that was made for RMN's 10th birthday (so made within 10 hours). The game is a murder mystery set during a school trip. The whole game takes about 10 minutes to complete, it has two modes – Serious and Meme. There is very little difference between them, the plot follows the same points, the same clues are found and used. A small number of dialogue boxes are changed and the ending includes an extra scene in the Meme mode but the extra scene feels rushed. Frogge himself recommended the Meme mode if you're only going to play through once, I preferred the serious mode as I found it to feel complete, where as for me the Meme mode felt tacked on. Though who knows, maybe the Meme mode came first. 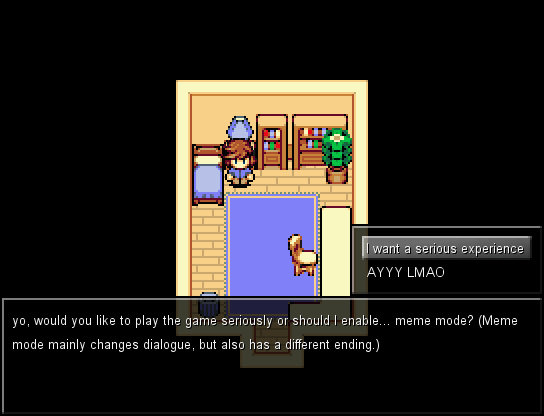 
In terms of visuals the game is beautiful featuring crisp pixel graphics everywhere except the title screen. The game takes place across two maps, the first being a tiny bedroom (pictured above) and the second is a large outdoor area where the aforementioned school trip takes place. The mapping is great and utilises the available space really well. In short the game is pure eye candy. 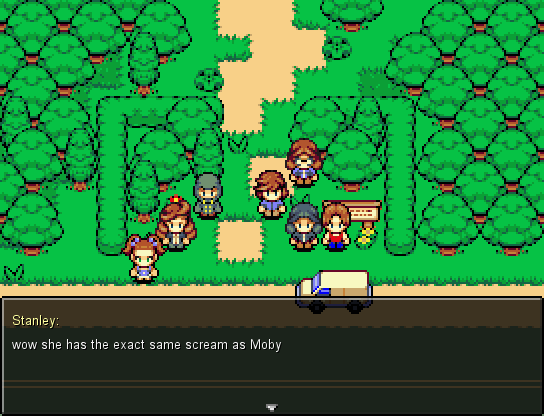 
Gameplay is where this game falls down, the game effectively has three sections, pre-murder, evidence gathering and then trial (for lack of a better name). The pre-murder section is largely pointless, it can end without you speaking to a single person. Also speaking to your various classmates provides no insight into the murder and barring usually a single line of dialogue you don't really get to know them. The second section has you speak to everyone gathering usually a single line of testimony/evidence. Then finally the game comes to the trial section where you have to choose the single piece of evidence that will advance the plot. I feel like this could have been handled much better, perhaps you could have discovered new evidence after catching people out lying, or had to question people. I imagine the weakness of the gameplay is largely down to the time constraints but it's a shame it wasn't developed further. 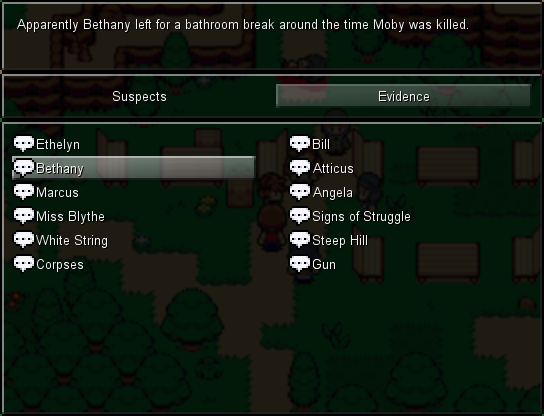 If only you could see the descriptions when you have to choose from them during the trial.


So to conclude, great looking game, dissapointing gameplay. Given that the game is only around ten minutes long I do feel I can recommended giving it a quick try. The actual mystery and logic leading to the solution is reasonable, though the plot around it is a bit weird, why kill the driver if they didn't intend to kill everyone? Why throw the gun away if they did intend to kill everyone? Anyway I award this game 2 stars.