It's June, 2017, and Meinchara is lying on his couch, bored of life in general, when his cellphone makes a loud beep that gets him out of his stupor. He fumbles with his pocket and finally gets it out. Examining the screen, he reads a new message from his friend Sidechara that reads thus:

"I've got that new game you wanted to play, meet me at the game club in three days at 6:00pm."

Meinchara felt a surge of emotion. The new RPG that is popular everywhere, Final Daydream XXIV! An amazing RPG of epic proportions! Graphics so HD they come out of the screen and punch you in the face! A great array of black leather dresses! Characters so androgynous you can't tell what gender they are! Over 80000 hours of intense action! It's the game every gamer wants to play, and now it was three days away from being in his hands!

Meinchara couldn't wait. The days passed by ever so slowly as Meinchara paced around his room trying to find a way to kill time and make it go faster. One day passes, two days pass, and finally the third day arrived!

Meinchara heads over to the game club in a hurry, a great afternoon of RPG goodness awaits him. Little does he know there is an unexpected surprise waiting for him at the club...

Made for RMN's 10th Birthday celebration, Retro Mania, Retro Geemu is a short RPG with the essence of games of the 1986 era such as Final Fantasy and Dragon Quest.

• A nostalgic trip back to the NES era!
• Original retro graphics, music and sound!
• A gripping story that will keep you at the edge of your seat in excitement!
• Controllers with worn out buttons! 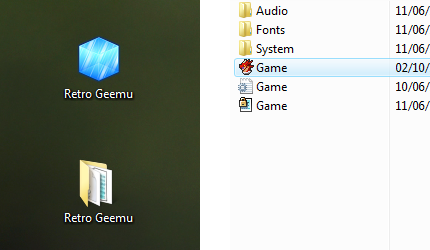 Retro Geemu's Soundtrack is now free to use on your game projects.

I have uploaded Retro Geemu's .OGG files to RMN as a resource, so that people who have the need to use NES like music can have a few free tracks to choose from.

You can find the soundtrack here: https://rpgmaker.net/resources/290/
Just who is this mysterious stranger?

Tables that get in your way!

Characters so androgynous you can't tell what gender they are!