Presenting the Rogue classes, the last of the 12 basic classes!
This time I was inspired by more common depictions and stereotypes found in different works of fiction.
They seem to be the most colorful classes so far?
I tried to use many contrasting colors to make these guys stand out. 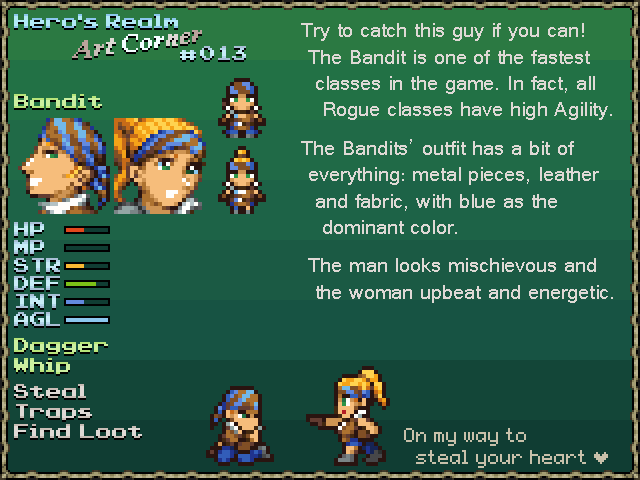 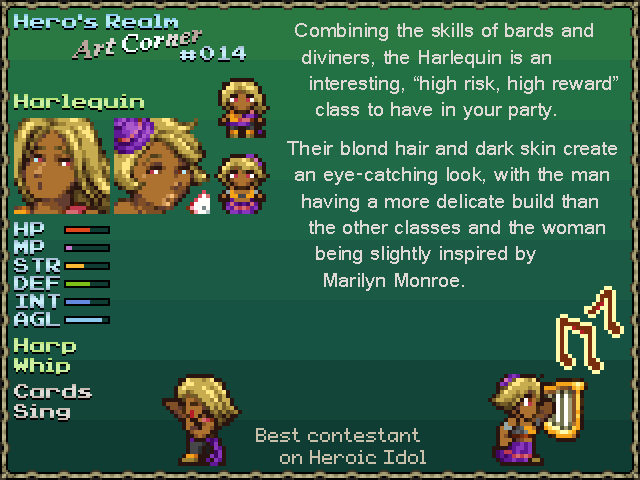 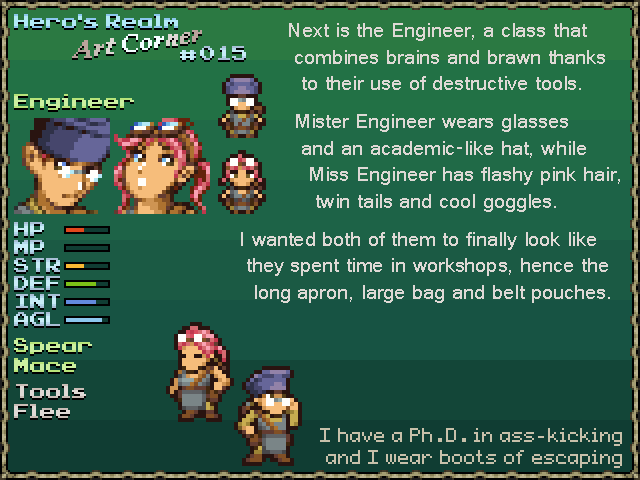 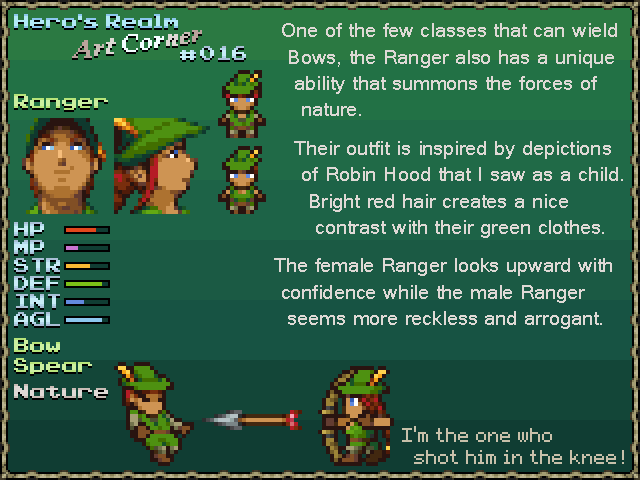 Presenting the next classes, numbers 9 to 12!

The Mage classes were the most fun to reimagine.
I wanted some of them to be inspired by fantasy depictions of different religions and/or cultures.
Let us know your favorites! 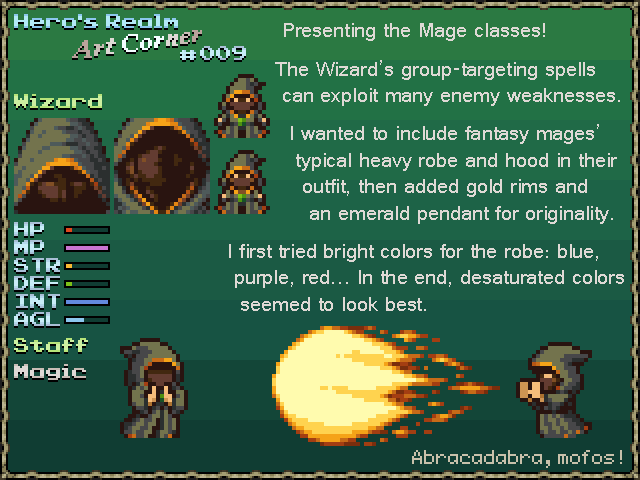 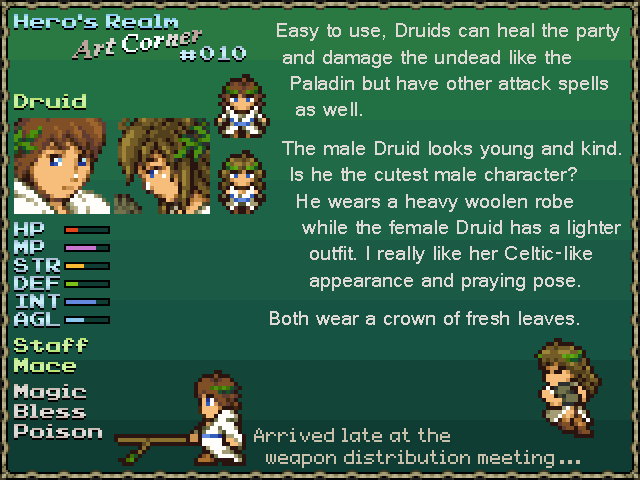 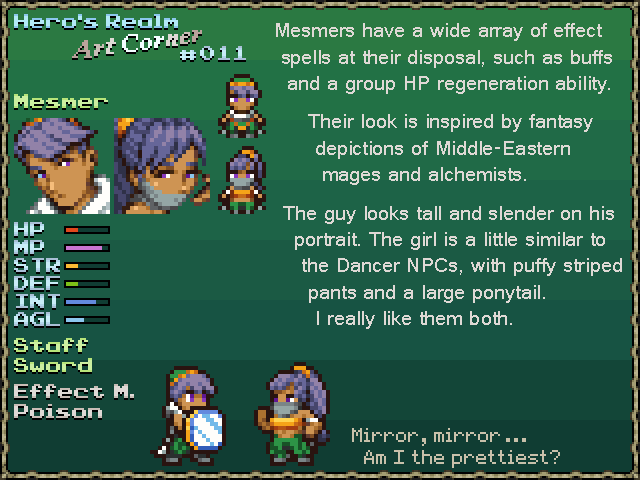 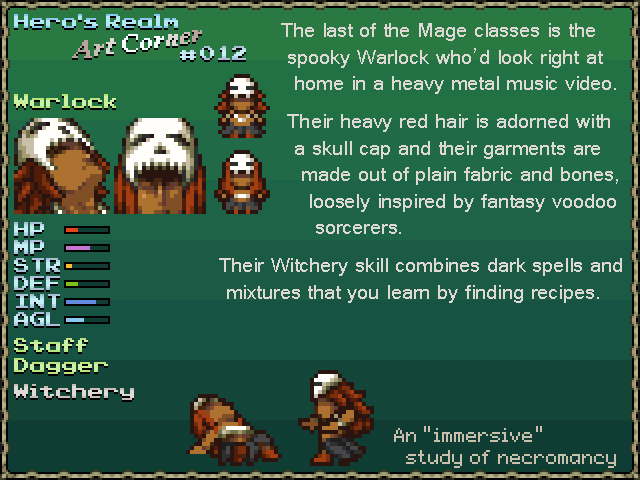 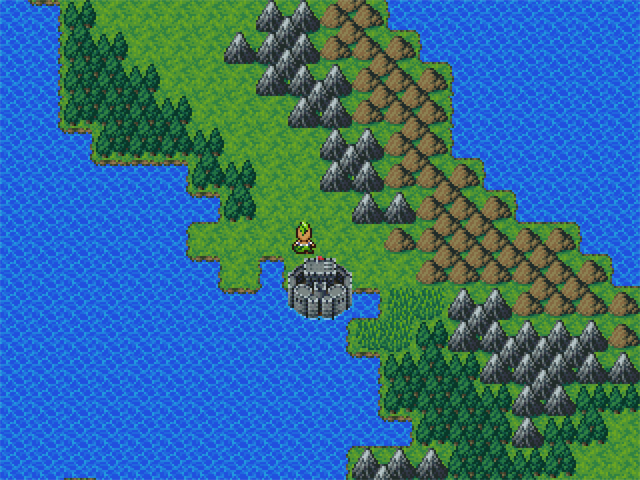 Avee has been hard at work converting over the RM2k3 RTP tilesets to the custom tilesets and charsets he has created. It is downright astounding the work that he did! It is no small feat to have completely revamped a graphics package as extensive as the RTP that comes with RM2k3, and frankly I am speechless. So I will let this screenshots speak for me. Here is a quick sneak peak... 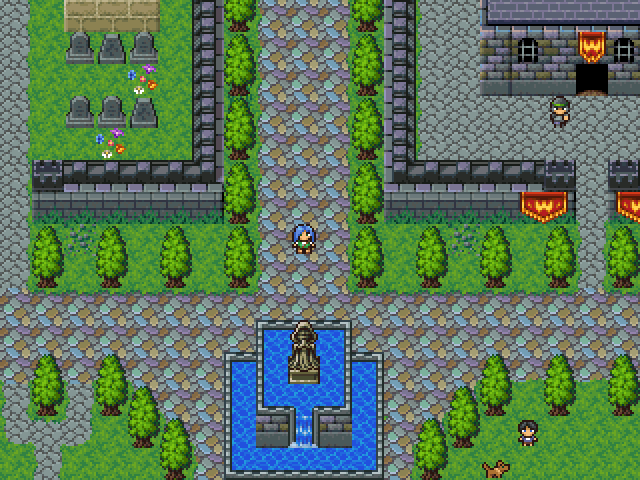 Here's an abridged list of the changes Avee made:

Changes made to resources:
-Renamed a few of my files properly and deleted duplicates.
-Added a plain wooden mage staff to the Wands & Cards battle weapon sheet.
-Added and updated several charsets, chipsets, a few facesets and added new pictures used in Void of the World.

Changes made in the database:
-Fixed a few passability issues in the tilesets, updated and added new ones.
-Replaced the plain wooden stick weapon (not the one with the cute little leaf) with the plain wooden mage staff.

Changes made to the world map:
-Replaced ripped sprites with original ones.
-Added dunes in some of the deserts.
-Added high snow mountains in some of the snow areas.
-Improved waterfalls and a couple of areas that looked odd. 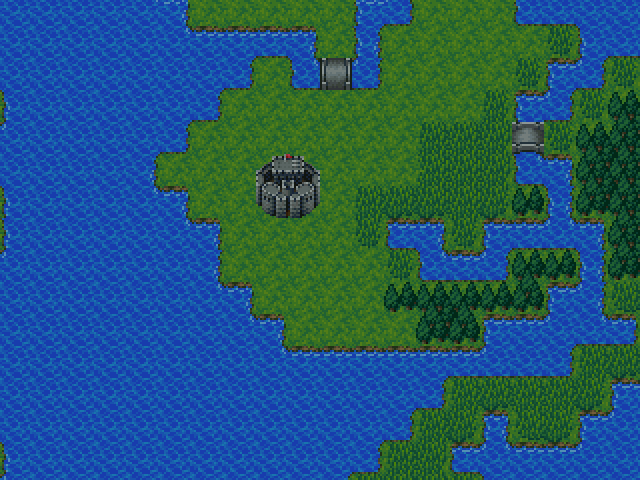 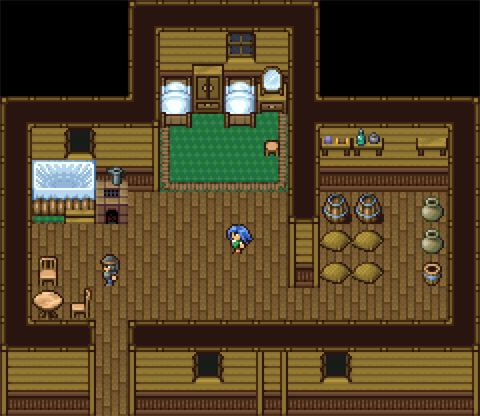 More images and screenshots will be coming. Hero's Realm: Heroic Edition is getting close!

Continuing the Art Corner, I was given a lot of creative freedom to reimagine the character classes.
I drew the Warrior classes hoping to convey the ideas of physical strength and toughness.
Please let us know your favorites!
And look forward to recruiting them for your team. 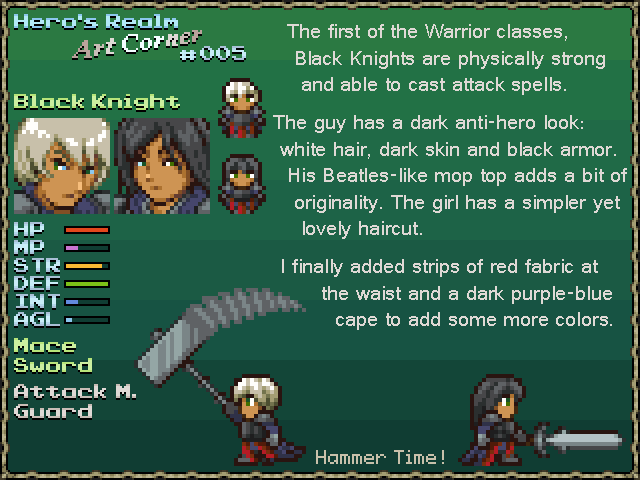 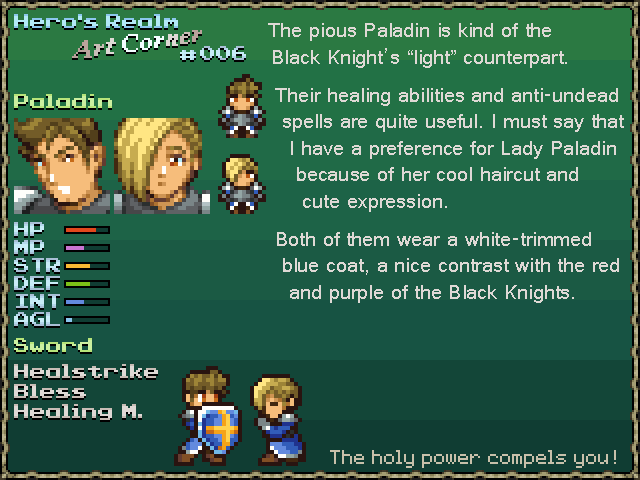 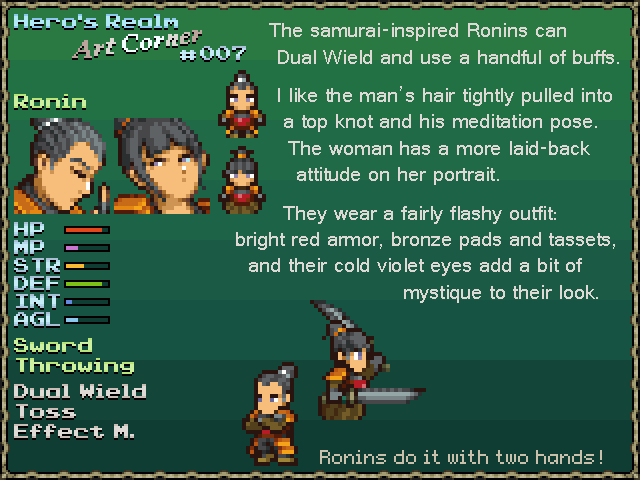 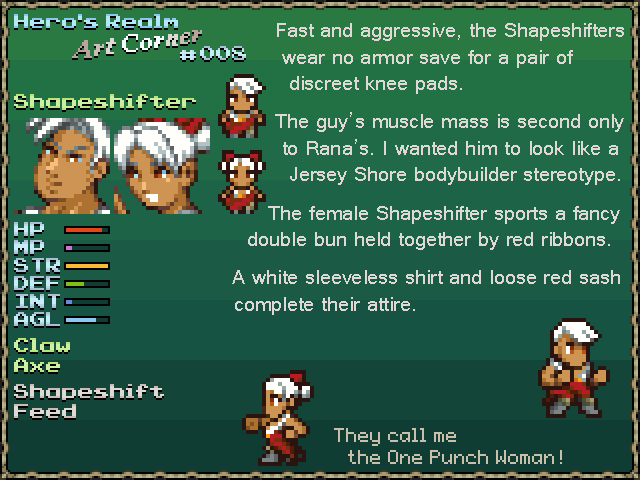 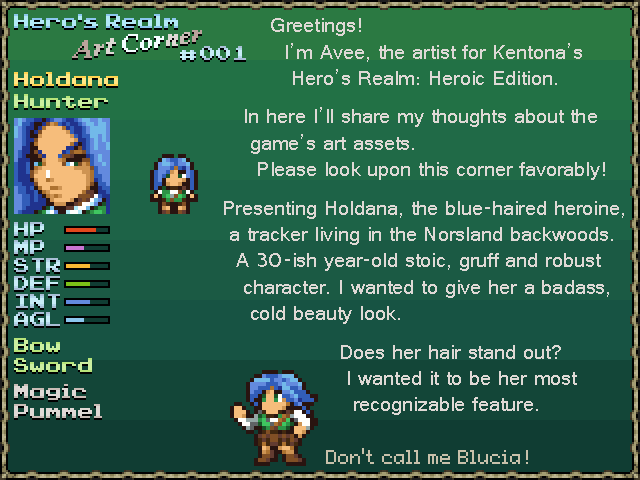 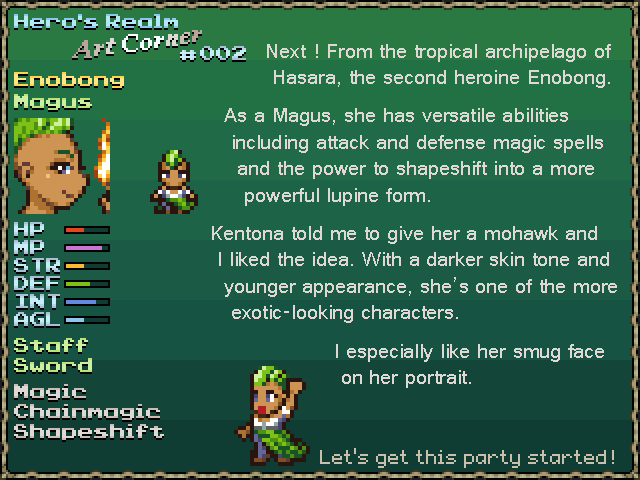 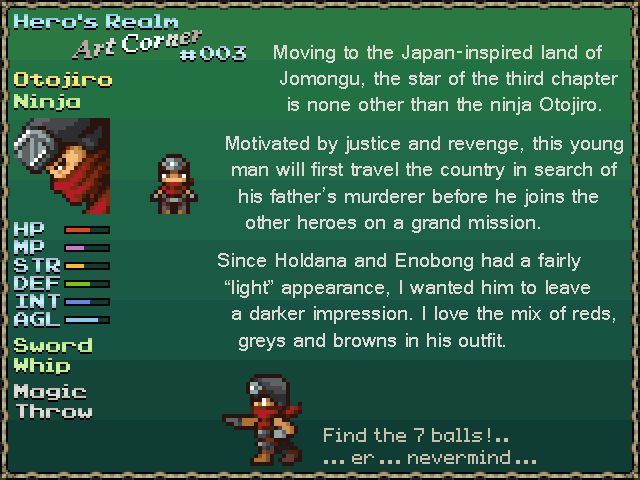 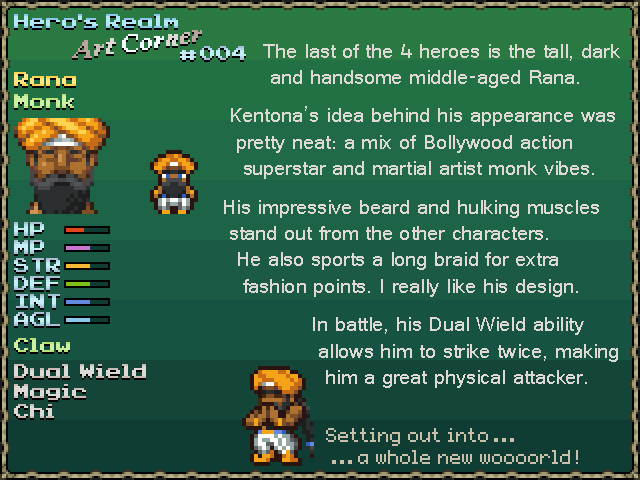 visitorsfromdreams has been making some incredible progress on the battle animations. I am going to showcase ALL of the works-in-progress below. Hero's Realm remaster is shooting for that early SNES retro vibe, and I believe that these are hitting the mark! I am a sucker for lightning animations, too.

NOTE: Just to be clear, these are NOT public domain animations. This is just a showcase for what is in store for Hero's Realm.

A Song of Fire & Ice

First off, I'd like to announce that I have arranged for visitorsfromdreams to do battle animations! This was a longstanding outstanding hole in my resource creation list, and I am glad to have him on board. Welcome, visitor!

Avee has been working hard at monster sprites. The results so far have exceeded my expectations! As mentioned, visitorsfromdreams has just begun work on the battle animations and is making great progress already. I have to reconnect with zDS and pianotm to gauge their continued interest with composing. What I have so far is great and would love more! Battle backgrounds are still in limbo. I haven't addressed sound effects yet.

Work to incorporate the remastered resources is well underway. Once I have completed the battlechar imports, I plan on handing off the mapping revamp work to Avee (who has graciously offered to tweak the maps to incorporate his great tileset work). That handoff should be happening in the next 2 weeks.

Significant strides have been made in fixing and finagling with fine-tuning the balance. I believe I have it at a point where the heroes' and enemy stats are more balanced with each other while improving the overall effectiveness AND distinctiveness of the umpteen classes. My next area of balancing focus will be on skills/spells. Spellcasters overall were underpowered in this game (relative to the pure fighters) and I want to address that.

The major defects have been addressed (but not excessively tested, so we'll see). Once I finish my plans for balancing, I will begin extensive playtesting (myself). I have a list of need-to-do enhancements (nothing too extensive), and a longer list of nice-to-haves. Knowing my completionist nature, I will most likely implement them all. Battle events will need to be tackled and revamped to address a couple of the shortcomings (unfortunately) - this is going to be a tedious task due to how RM2k3 handles battle events (and how I implemented them back in 2006-2009). But it has to be done if I expect to deliver a quality product.


Final Thoughts ::..
Hero's Realm is undeniably a classic early-to-mid 90s-styled RPG. It is an earnest loveletter to the games I enjoyed then. However, I fear that the lack of a distinctive hook - like so many other exciting indie games I see posted on here and Twitter and elsewhere - will anchor this remaster. Although my modest hope is to recover the costs (and to tip my resource creators), even that seems increasingly out of reach. Ah well! Publishing a game is a long time dream of mine, and I mean to do so. A stronger marketing push will be made closer to the release date. For now, I will constrain my update posts to RMN and the close friends I have here.

I have been implored to post an update on this project, and shockingly, it's been 11 months since I last did so. Welp.

Here is what has happened:


This update is rather one-sided, isn't it? A lot of guilt and regret has built up on me these past few months over this project and its slow going. It got to the point were I've even written an article about it, to try to spur me into action. (I guess it + the PM I received from an anonymous source worked, since I am making a blog post?).

Next steps involve applying the new tilesets to the project (and tweaking where necessary). And showcasing some of the great work that Avee has delivered in the past year! 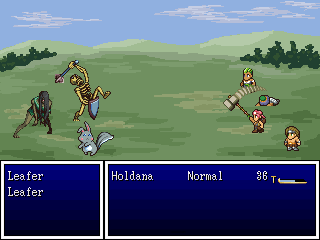 Summer is finally upon us, and my schedule looks freer than it has in months. I intend to post regular progress updates over the summer. Thanks for reading, and sticking with me all this time.


Avee has finished a few tiles for the overworld chipset this week, and I'd like to showcase them! Most of them were made from scratch (!), and others inspired by the RM2k3 RTP. Your feedback would be appreciated, in regards to shapes and color choices in particular. 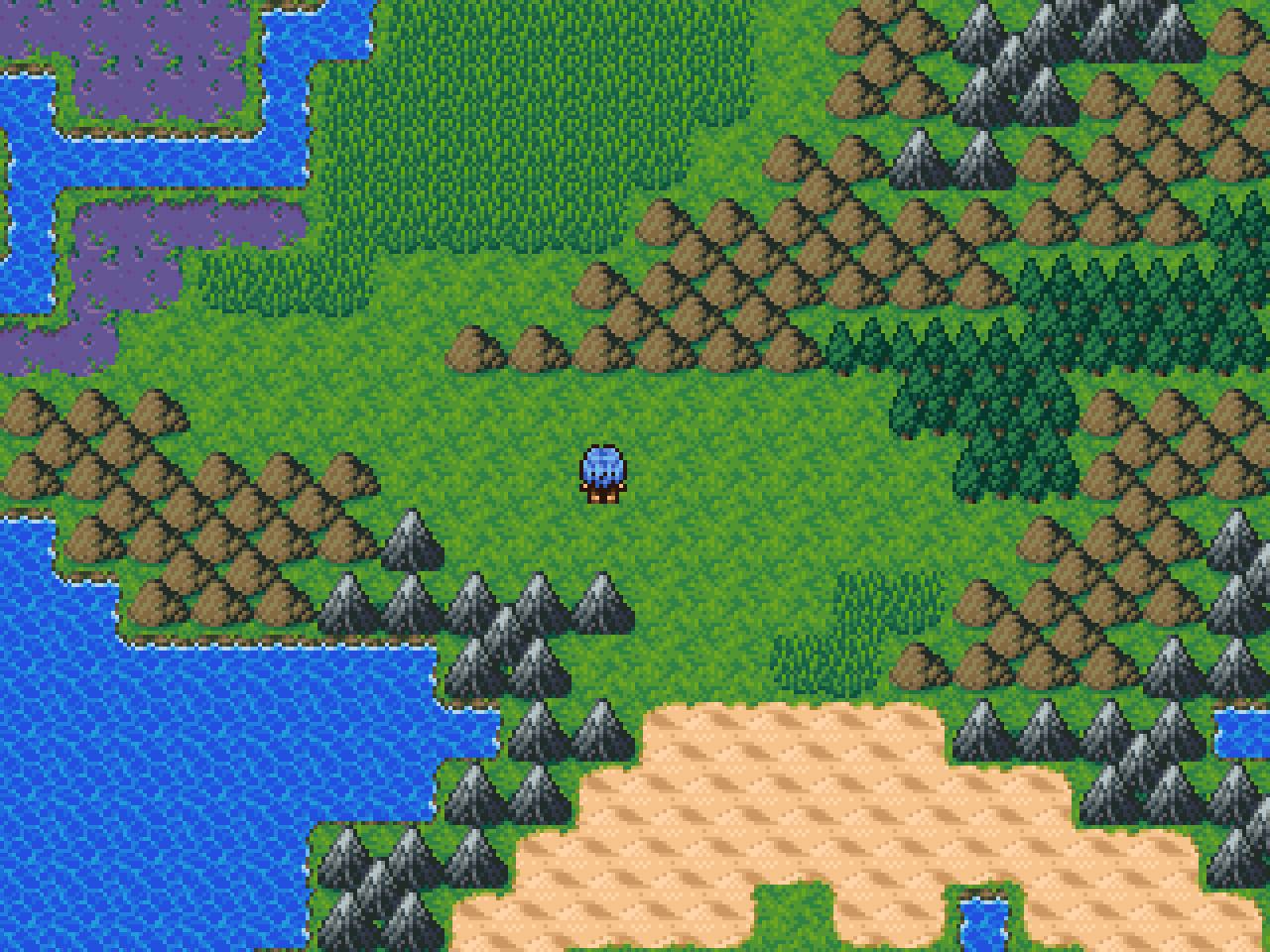 I even did a quick video (I don't know how to do videos). It features the new worldmap tiles and Holdana's Theme by pianotm.

We are making progress!

Progress is being made, albeit slowly.

Avee has been diligently working on custom NPCs. You can see a sample of his work above. I have compiled a list of the music submissions so far, but have not kickstarted the process to make further progress on the soundtrack. I plan on doing this soon. As I have lost all contact with BigWig, I have tentatively worked out an agreement with someone else to make monster sprites. Once I have solidified details I will reveal more. At that time, I will also release the work that I paid for and received from Bigwig completely, for you guys to check out (and maybe use in your games with my permission? I haven't thought too hard on that yet).

I have completed the bug fixes for all of the bugs I currently know about in Hero's Realm - compiled from all of my old notes and reports from the umpteen pages of messages, emails, and posts from among the 35,000+ people who played the original game. I am currently working on implementing a few minor enhancements, afterwhich I will begin my personal (re)play through of the entire game. Once that is complete and I am satisfied with it, I will reach out for playtesters to play the game. If this is something you are interested in, please reach out to me now and I will compile a list of people to contact. The more, the better.

At this snail's pace of progress, I do not anticipate a release for this game until the latter half of 2018.

Thank you for your ongoing support. You are a hero.
Pages: first 123 next last