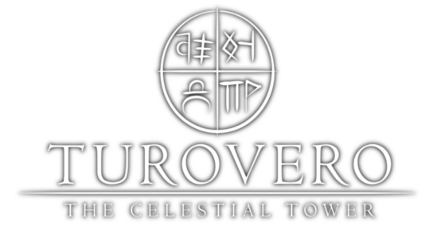 An incredible tale of tragedy and trauma.

The short version: Turovero is an absolutely incredible narrative trip that knows how to use pain and sorrow to weave a deeply compelling story, led by endearing characters. While it has a few mild gameplay shortcomings, this is absolutely a game worth sinking your teeth into.

Hooo boy, where do I begin with this game?

With the story, I suppose, as that's what makes it truly special.

Our four protagonists live in a pretty typical seeming fantasy world, with a mythos involving four creator gods that made their world and ruled it from the titular Celestial Tower, Turovero, only to one day be usurped by an entity known as "The Dark One". This evil entity then claimed the Tower for itself, and it's presence there twisted and ruined much of the land since. And so, our party of heroes decides to brave Turovero themselves, in hopes that maybe they can free their world from despair, or at least find out what happened to their creators.

Pretty standard stuff initially, and you'd be forgiven for snorting derisively at the "angry black cloud" used in the (rather pretty) introductory cutscene to represent said Dark One.

But this? This is all just set dressing, not the actual meat of the story. That meat being our four incredibly well-crafted protagonists.

Sigurd the Knight, Edric the Mage, Leila the Druid, and Ruby the Thief.

Four heroes that have formed a sort of family, and who have not one, not two, not three...But FOUR cases of Traditional Hero Amnesia that obscure a great deal of their past lives.

But unlike so many uses of this trope, said amnesia is used to absolutely STUNNING effect here by allowing for a very slow, often cryptic or symbolic series of reveals that allow our four heroes to experience their own painful stories at the same time as the player.

See, each of our protagonists is haunted by some past trauma buried in those memories that they've forgotten, and the Dark One's minions will absolutely delight in rubbing salt in those wounds in absolutely vicious ways. And that ends up being the true heart of the story, weaving a narrative that's equal parts horrifying, tragic, and cathartic. I just want to give all of these characters a hug after what they go through, is what I'm saying.

It's a very good exploration of several kinds of trauma as well. And given that there are four heroes, you are bound to find at least one you relate to, even a little bit. The way the story slooowly peels back the layers is nothing short of masterful.

It's also telling to the author's talent that a certain element of the story, which in most other stories I feel ends up overbearing or mishandled, wound up strongly contributing to how beautiful a story Turovero is.

The game can be pretty tough as a dungeon crawler. Not in the immediate sense of "This encounter will straight up end me", but more in the sense that you will frequently be panicking about when to use your resources until at least the halfway point of the entire game.

See, every dungeon has a predictable flow. For the first half you are on your own, no shop, no healing spot, maaayyybe if you're lucky you have a single one-shot mana-refill. So if you screw up too much and save in that situation, you are absolutely finished as near as I can tell.

Then, at the halfway point of a dungeon, you'll unlock a way to heal for free, and a shop, which allows you to breathe a little and tackle the rest of the dungeon with a little more confidence, knowing that if you start to run low on MP, you can preserve your stash of items by running to your recovery spot.

Honestly, I like it. It's a neat take on the genre that balances the resource management of the dungeon crawler genre, but also allows for some more breathing room that lets the narrative bits shine a little bit stronger in the second half of each dungeon.

And this is without even having talked about the devious puzzles.

Our four heroes each have a skill that's used outside of battle. The warrior can shatter stone statues to clear the way forward or reveal hidden things. The Druid can make plants grow, which can lead to free healing items. The Mage can light things on fire, which is useful in a surprising variety of ways. And the Thief can fire long range arrow shots to hit predetermined targets.

These abilities are used in a frankly impressive variety of ways to create excellent puzzles, the overwhelming majority of which are exactly the right difficulty, allowing you to feel like you've earned that familiar "...Oh! AHA!" moment.

This is on top of item based puzzles, searching for key items, and an impressive set of riddles, environmental puzzles, and narrative-based puzzles to boot. It's an excellent blend.

Combat is standard. Just...Standard. Like, the high end of standard, sure, but standard nonetheless.

If you're on board with just pumping out damage and healing and trying to find the optimal damage/survival/stat-boost balance, you'll have a blast. But as someone who enjoys more strategic systems and "combat puzzles", it left me just a little cold for a majority of the game. There's little to play with other than "Which skill does the most damage/healing in this situation", and Status Effects feel far too unreliable to, well, rely on.

The more you progress and the more skills you gain, the more depth there is to play with, but up until about the 6th floor, I felt like things were just a wee bit too simple for my admittedly unusual love of "combat puzzles". Some proper tanking, mitigation, reliable statuses, or other interesting esoteric skills would have perfected the game in my eyes and made it a perfect package.

I get that this is a "me" problem, but considering the care that went into the puzzles and story and art and everything else, I can't help but wish there was a little more depth and strategy put into the combat system.

It's also unfortunate that there's only a single difficulty level (at least as of this review). While someone like me who eats RPGs for breakfast can handle basically everything the game had in store, people who aren't so good at it might end up missing out on the sweet sweet narrative as a result.

The combat is good, don't get me wrong. But it doesn't reach the same levels of excellence as the rest of the game.

And speaking of excellence...

Music and art - A symphony of awesome

Ok, this is a sweet doozy too.

The sprites and character portraits and enemies are absolutely lovely to look at, and the portraits especially have an excellent variety of expressions. All in all, excellent work here.

And the soundtrack? Dear me the soundtrack...It's loaded with emotional highs and mournful lows. I'm VERY happy that it comes as a separate download. Just about every track feels perfectly on point, or at least really enjoyable to listen to.

Attention to detail - A game full of love

There is a metric ton of attention put into the little artistic details that REALLY make the game feel amazing and makes many of the high-intensity scenes pop. There was clearly a ton of love poured into this game, readily apparent when it recognizes the order of things you've done, even having multiple conversations due to "Did you read this sign before picking up that key item, or after?" situations.

Sadly there are a handful of places where the design slips up.

There's at least one place where a save point can put you beyond a point of no return and facing a VERY tough boss fight, with no way to retreat to a shop or rest spot to grind or get the items you need to survive it. (Always have a backup save placed at any rest spot or safe zone, just in case. Or do what I tend to do in RPGmaker games and use a new save slot whenever you hit a new save point, you've got 16 save slots all to yourself, after all!)

You also can't go back down the tower to revisit old zones, meaning once you've beaten a boss, you'd better be appropriately geared and levelled and have healed up to be ready for the next half-a-floor of careful resource conservation.

But, as long as you make backup saves for those few occasions, and you play smart, you should be able to handle whatever the tower throws at you. I only ever grinded once, and it was a single level (Mostly as a consequence of wanting more items and I figured "why not go for one more level"), which is a testament to how well balanced the difficulty is. In fact, if I'd had the right accessories equipped, I might not even have needed that one extra level (The specific elemental resistance equipment are apparently quite strong, which I never realized).

Conclusion - A journey worth taking

I am VERY glad I played Turovero. It's an absolute gem, and it's one of those stories that I kind of wish I could forget just so I could experience it again fresh. And this is WITH there being multiple "narrative paths" that allow for replayability!

Now, if only there was a New Game+ mode or at least an Easy Difficulty, so I could experience the OTHER variations of the story in this game while being able to skip through the combat more quickly to get to the juicy story moments, I would gladly revisit it to see all four of them, maybe more than once.

Turovero is truly something special. Something magical. And while a handful of flaws prevent it from reaching perfection, they're small enough that I almost feel bad not giving this a perfect score.

If a way to experience the story with less drawn out combat is ever patched in, you will find me ascending that Celestial Tower another 3 times, probably back to back. :)

Final Word: If you've got the fortitude to handle a dark, often painful story, to receive that catharsis that comes with confronting it...I welcome you to climb Turovero. It's an amazing ride. 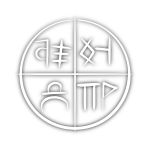 To be honest, I did initially want to do more with the combat than was really feasible for my experience level. An idea I scrapped, for example, was a unison attack system where multiple party members could use a special attack if they had enough points for it. While I know there's probably a way to do it with scripts etc. I didn't want potential feature bloat getting in the way of the game's emphasis on narrative. Maybe one day if I retool this game I might add it in, though... *insert thinking emoji here*
Pages: 1