This script allows you to set a limit to the number of skills a hero may learn and keep for use in battles a la Pokemon but the menu looks and works in a different fashion. Actually, it looks more like any default menu than anything else. Besides the player may select which learned skills will be replaced with new ones IF the player ever wants any of them to be replaced. There's no problem if the player may prefer to replace just a few or even none of them.

It's a Plug & Play script but it's still possible to change its settings by checking and editing most of the Constants found in KSkill module.

Since version 1.1.0 you may count on 2 script calls to allow the heroes increase their skill limits if deemed necessary.

I think that the method names included in those script calls make clear what they are supposed to do during gameplay. The catch is that every single time you use any of them the skill limit increases or decreases by that number. Make sure the skill limit never goes below the original skill limit nor it reaches zero.

The VX version of my script already includes two new info windows that will let you find out all there is to know about the selected skill so you as the player can take a better decision. I'll see if I can also do the same with the XP version, but that will take some time... 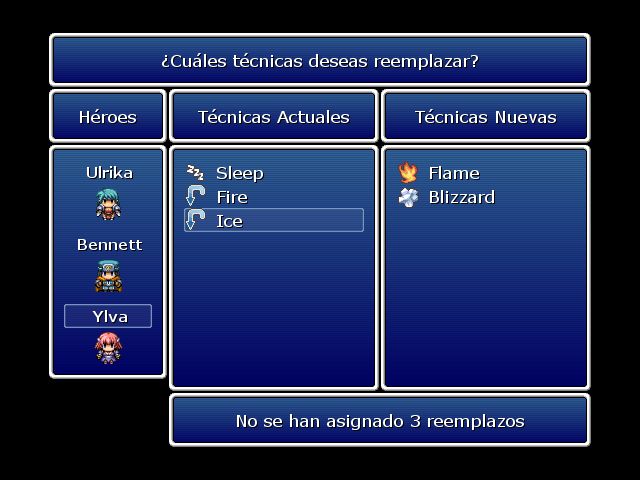 Nothing to say, yet.

Free for use but not really meant for commercial projects, but you might make a small payment in case you want to include it in any of your commercial games. Due credit is not optional but a must.