Make a light-switching puzzle with a single common event and some clever Javascript.

Inspired by GoodSelf's evented Lights Out puzzle tutorial, I'm going to take you through how to achieve the same effect with Javascript and a single common event. That's right, you will not be putting a single event command into the switches except "Common Event". Behold the power of code!

First, create your lights. For the purposes of this tutorial, I'm using !Switch1 from the RTP but you can use whatever you want. Bear in mind that if you use different graphics the animation move route in the common event may need to be amended accordingly. Obviously it needs to have a graphical representation of "on" and a graphical representation of "off". Here, I'm going to use the red button for off, and change it to green when it's on. The first event page will have the "off" graphic and be set to Direction Fix. This is important, as it prevents the switch from "looking" towards the player when interacted with, causing a weird graphical glitch. 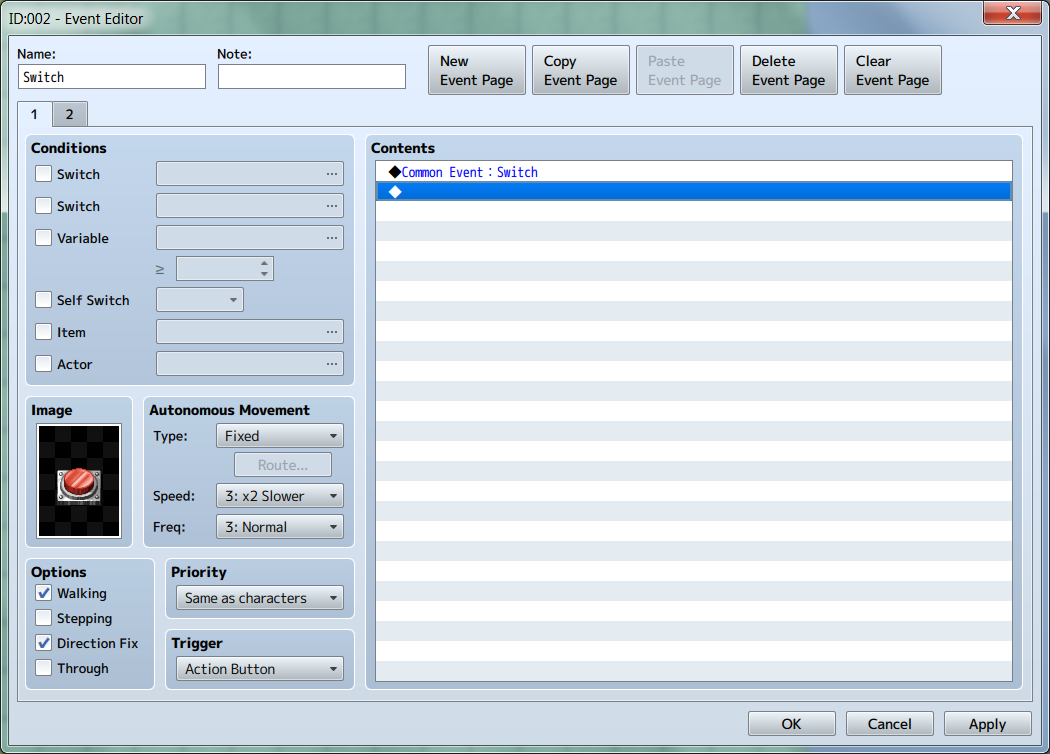 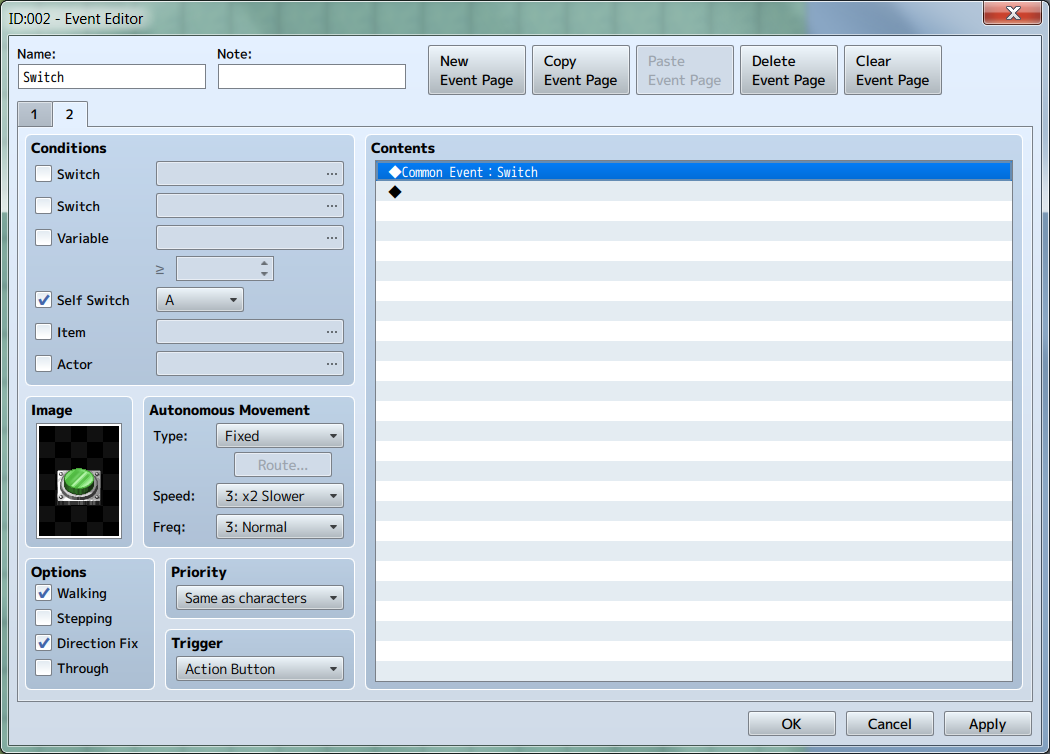 Copy and paste this event until you have 9 of them in a 3x3 grid. I called mine "Switch" but you can give them any name you want, just make sure they're all called the same thing and don't share a name with any other event on the map. 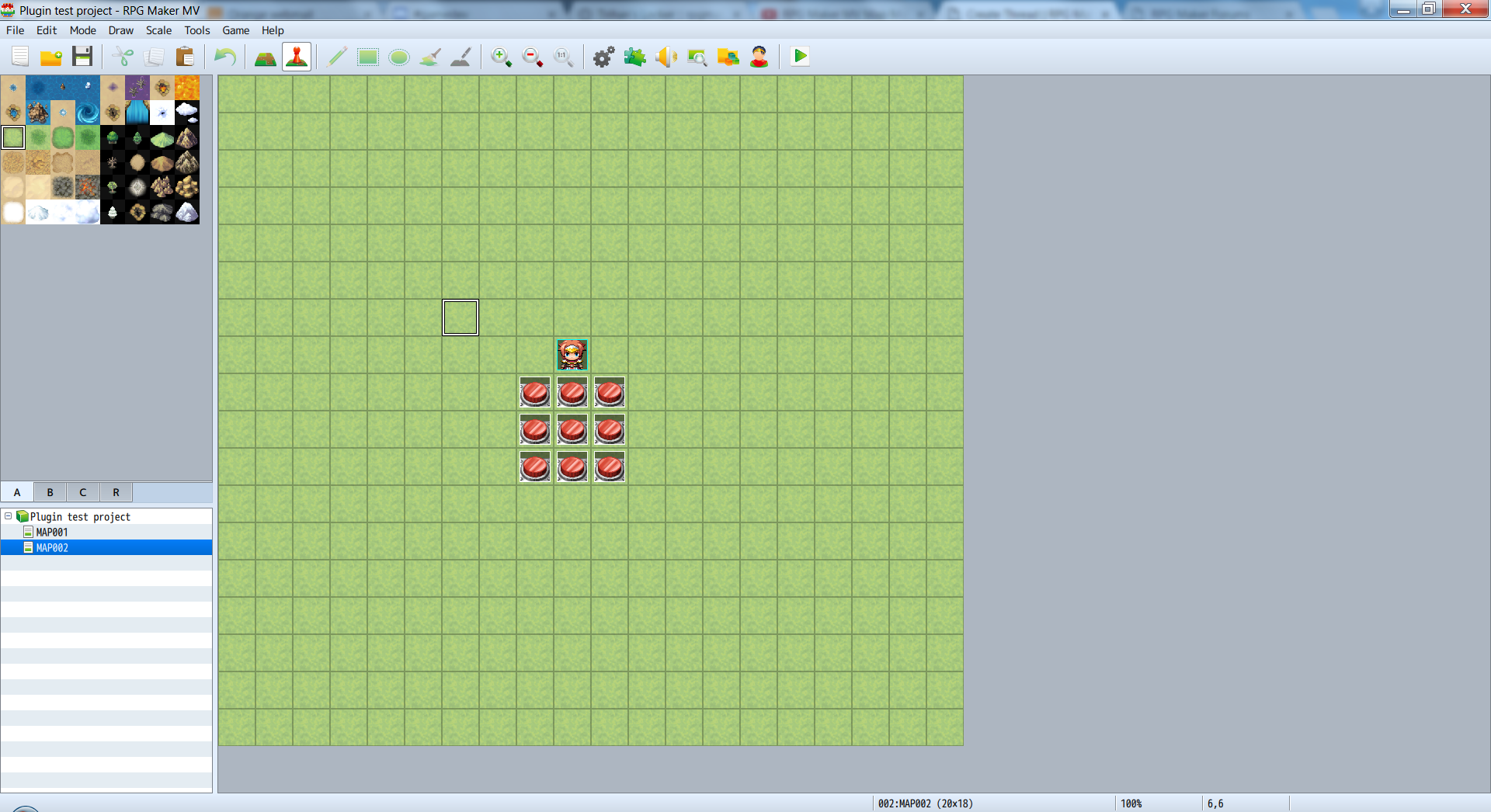 Here's what your lights should look like in their grid. Don't worry about what order they're in, the common event will handle it, trust me.

Speaking of which, let's make this magical common event that will do everything for us forever! (except make toast, common events are pretty lousy at that, even with Javascript).

I called mine Switch, but again you can call yours anything you want.

Following the conditional branch, we'll do some magical Javascript jiggery-pokery to loop through all the switch events and find the events adjacent to them, then flip the self switches for those events so they toggle (with a sound effect to accompany the change). Then we'll loop through the switch events again to check that all of them are OFF, and if so show the player they won with accompanying victory ME.

This will be done almost entirely with Javascript. Literally the only event commands I'm using here are Play SE, Conditional Branch, Set Movement Route and Script.

Go ahead and add a Play SE for whatever sound you want to play when a switch is hit. Then do a conditional branch for self switch A being OFF (with an else branch), like so: 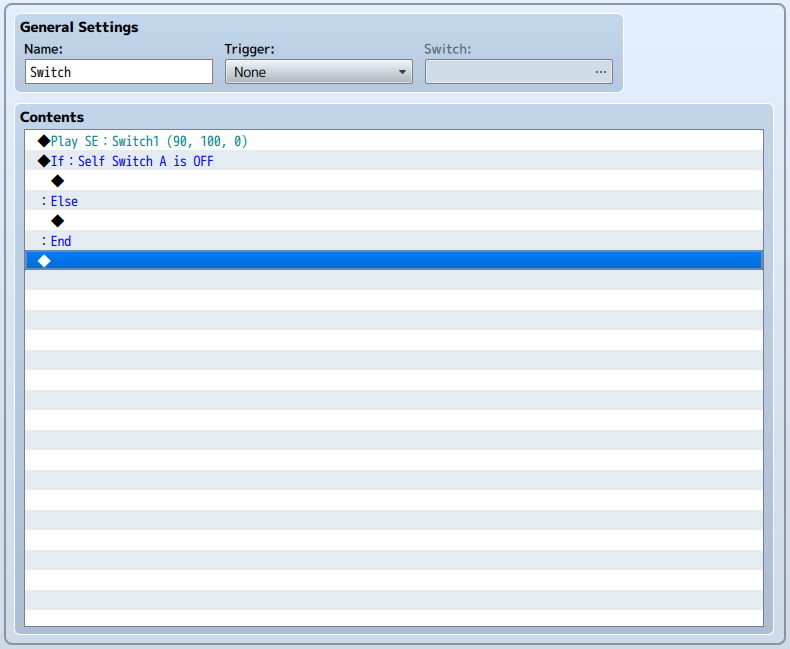 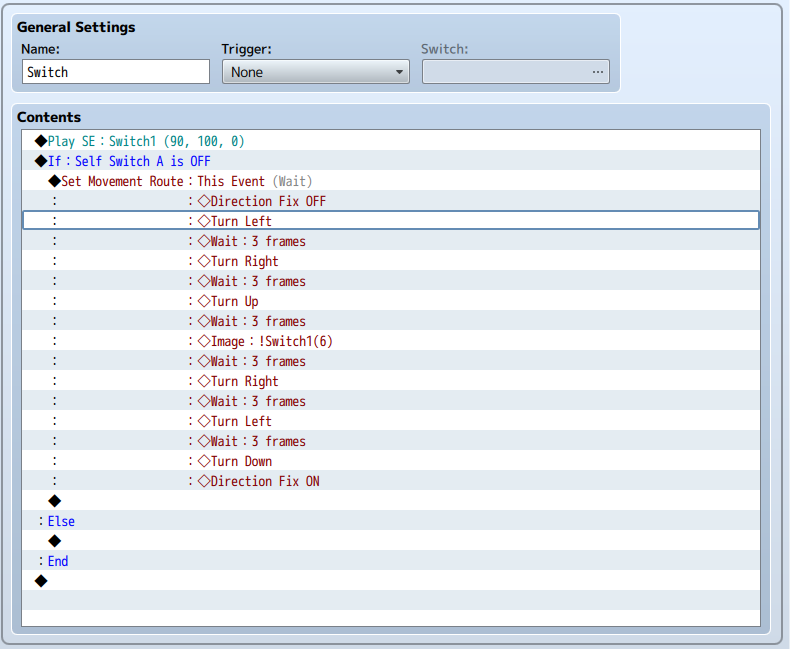 This is what it'll look like when you press it in-game:

Then we turn on self switch A, but how do we do that from a common event? Well self switches are just like normal switches only instead of having a single numerical index, they're referenced via a key. The key consists of the ID of the map the event is on, the event's ID, and the letter of the self switch. Knowing these, we can then use setValue to set the self switch from an external event. Like so:

The ELSE condition of the branch will have exactly the same move route with the exception of changing the image to !Switch1(4) instead of !Switch1(6). The code that follows is identical to the previous line with false in place of true:

Note that we can use "this" because when a common event is running, "this" returns the map's instance of Game_Interpreter. eventId() returns the ID of the event that called the common event.

Okay, now we want to find the events that are adjacent to the switch we pressed, and also turn them on/off. The code might look a bit overwhelming to novice users, but I'll explain how it all works, don't worry.

Okay, so in the first line, we're getting the array of events in $gameMap and filtering it using a function. The function will iterate through each event and give it the variable name "ev". In each iteration, we will include the current event if its event ID matches the event ID of the map's interpreter. Obviously only one event will meet this criteria, so we'll end up with a 1-element array. Therefore, at the end we add a to get the first element of the returned array, and this will give us the Game_Event corresponding to the activated switch. We assign this to the variable "event".

In the third line, we iterate through each element of adjacentEvents applying a function to it, and in each iteration we assign the current event to "ev". In the function block, we set the value of the current event's self switch A to the opposite of its current value; if it's false, it'll be set to true, and if it's true it'll be set to false. Now because we have that second event page, the graphics for the adjacent switches will change automatically.

Following this, I've put in another sound effect. You don't have to do this if you don't want to.

The next code snippet will check for victory:

Once again we're filtering the map events searching for each one with the name "Switch" and assigning the new array to the variable "switches". We then set a variable called solved to true. Following this, we iterate through each switch giving it the iteration variable "sw" and then set solved to false if the current event's self switch A is true (because all must be false to win).

Following the forEach loop, we check if solved is true, and if so we play a victory ME and show a victory message. 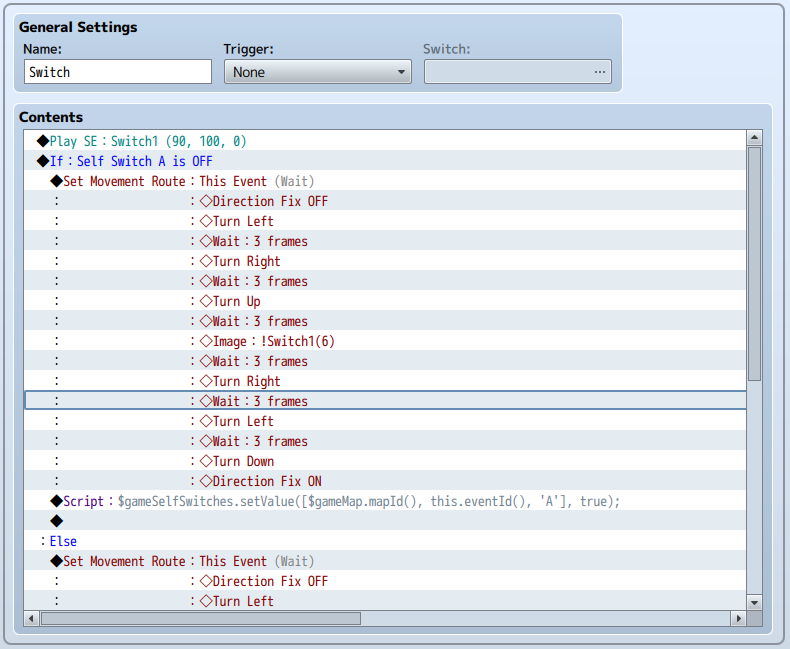 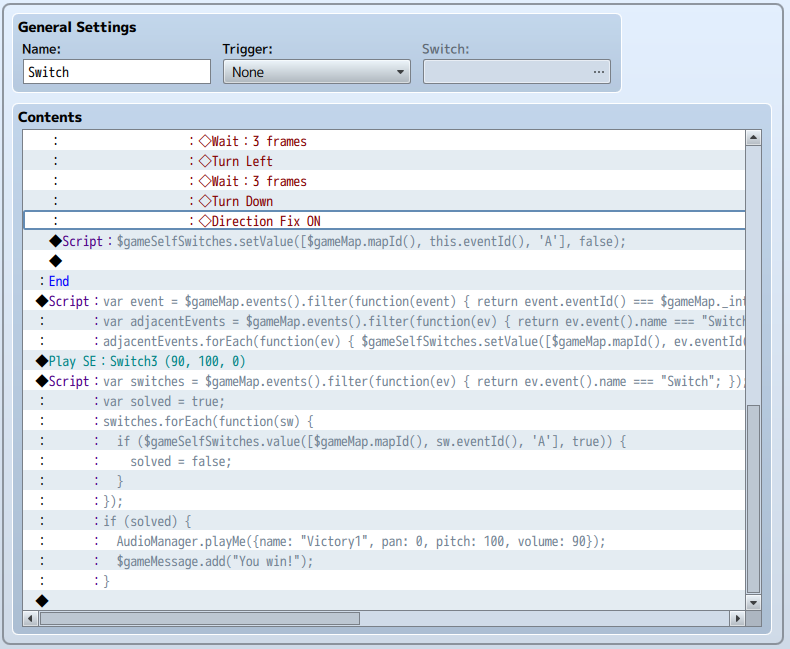 Note that part of the second Move Route is cut off in the screenshots, but it's identical to the first one other than the image change anyway.

And here's what the final result looks like in-game!

The only other thing to consider is the initial setup. Here's the code you can put in an autorun event to randomise the order (note that this doesn't guarantee a solvable configuration):

If you followed the last forEach loop we did for the switches, this shouldn't be too difficult to follow. The difference is that this time in the function we're setting each event's self switch A to true if a random number from 0-1 is true, and false otherwise.

And that's it! You've just made a puzzle that would have been fairly complex to event with a single common event and no actual switches whatsoever! Go and make yourself a cup of tea, you've earned it.