While percentages isn’t something that usually comes up when making a game in RPG Maker 2003 it does have it uses. Especially when you’re making custom systems and menus. Like in a healthbar to display a character’s HP or maybe a skill that scales its damage depending on the users remaining health.
Since I’m forgetful and math isn’t my strong suit I keep forgetting how it works and end up having to look it up again and again. So I figured it would be easier to write a little guide that I can go back to and it might help others as well.

There is links to a demo project at the bottom. The demo will showcase the examples used in the guide. So you can look at all the events yourself.

So let’s get started.

Usually when you want to get the percentage of something you would divide it by the max value. Like 45 / 75 results in 0.6 which would be 60%. This doesn’t work in RPG Maker 2003 since it doesn’t support decimal numbers (also known as floating points). So we are stuck working with regular integers. That means when we’re calculating the percentage we want to get back a number from 0 to 100 instead of a 0.0 - 1.0.
To achieve this we can use this formula:
result = (100*current + max/2)/max


But how do we get it into RPG Maker 2003? Well, let’s start by creating a common event and we’ll take it step by step from there.

Name it to something like “Get %” and set the trigger to “None”.

Now that we have all the variables we can start implementing the formula in the common event. We’ll start with this part of the formula:
result = (100*current + max/2)/max

We’ll do this by setting the % Temporary variable to the % Max Value variable. After that we divide it by 2. Simple enough, you should see something like this:

Now just add the % Temporary to the % Result variable.

With that the common event is complete. So let me show how it would be used in an event. Say our heroic hero has been injured or just healed and we need to update their healthbar, then we would do something this:

In this case 333 would be our hero's max hp so we set the % Max Value variable to that. And we set the % Current Value to be equal another variable, in this case that variable would store the hero's current hp.
Then we simply call the common event we just made to calculate the percentage. Since the spritesheet index always start at 1 and not 0 we need to add a 1 to the result.

Now you might think it’s weird that there is a bunch of zeros in the formula. That cause this formula allows us to convert from more value ranges than zero to some higher value. We could do 23 to 434 if we wanted or whatever else.
If all we wanted was values that start from zeros we could use this formula instead:
result = (percent * max) / 100

Which is simpler to implement but we won’t go through it in this tutorial.

We will need another Common Event so let's make one. Name it to something like Map %. As before the trigger should be set to “None” 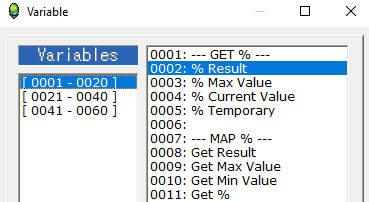 
We do this by setting the Get Result variable to be equal to the Get Max Value variable. The we subtract Get Min Value from it.

Start by multiplying Get Result variable with the Get % variable. Then simply divide Get Result with 100.

The final step is just to add Get Min Value to the Get Result variable and we’re done!

Now lets see it used in action. In this case we have a space ship that over the duration of 2 seconds it should move to a position and scale up. Now this could easily be done with a Move Picture event but maybe we want to be able to pause and resume the movement or even let the player control where along the path the ship should be. To do this we have a parallel process event on a map. It’s set up like this: 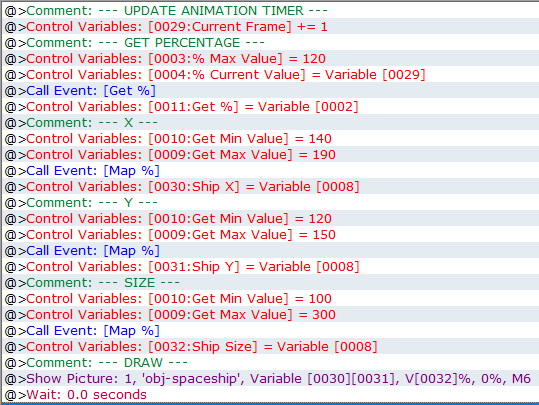 The Current Frame variable is where along the path the ship is. It’s essentially just a timer ticking up. The % Max Value is set to 120, which would be 2 seconds. RPG Maker 2003 runs at 60 frames per seconds, meaning the event will update 60 times each seconds. Thus 120 times for 2 seconds.
With the Current Frame and % Max Value set we can get the percentage of the path traveled by using our Get % common event we made before. With a percentage we can map the ships positions and size with our new Map % event. Just set the min and max value of each variable.
Then we simply draw the ship as an image using the X, Y, and Size variables we got back.

The demo project contains the two examples used above.
You can download it from here:
RMN | Google Drive