Close
I used to be a donut of the Silver variety

Then I became an Addit

I blame the Discord.

Mr. Cactuar:
I can’t BELIEVE that I wasted all of that time and effort
on someone who doesn’t even have one single Cactuar
to his (or her) own deck!

Mr. Cactuar:
And here I thought you were of the sophisticated kind.
Boy, was I wrong...

* Mr. Cactuar then gives the player back the card that he won *

Mr. Cactuar:
I know that it’s against the rules and all, but screw it!
Here’s your card back, I don’t want it!

Mr. Cactuar:
Unless it is a Cactuar, then it means nothing to me!

Mr. Cactuar:
Come back when you have possessed a Cactuar,
then our battle with be of more merit!

Either way, if you can't do something like this then it's fine. I guess Mr. Cactuar can technically trade whatever they win from the player to someone else in the hope of collecting more Cactuars with it, lol.

08/18/2021 06:20 PM
I remember this game; YDS suddenly asked me on IRC to say something out of the blue one day (not knowing what it was initially for) and she put down what I said as my dialogue for the game, lol.

Don’t worry about it. If anything, I like games with a little bit more meat on the bone. Besides, 2 hours isn’t that long.

(Also, TheRpgmakerAddict, YDS is actually a chick, not a dude.)

08/18/2021 05:56 PM
I added an NPC for ya: Mr. Cactuar, a strange man is who absolutely obsessed with collecting all of the Cactuar cards in the world and become the world’s largest collector and distributor of Cactuar. His entire deck contains nothing but Cactuar cards. And if he happens to win a match against you and you don’t have a Cactuar card in your deck, he simply won’t want it. Kinda of a joke character.

Triple Triad: Tournament of the Elements

08/18/2021 05:32 PM
Oh cool! This kinda of reminds me of when Pokemon back in the day made the Pokemon Trading Card Game spinoff for the original Gameboy (which I absolutely loved! And that’s how I also figured out how to actually play the god damn card game for once, which none of my friends, at the time, knew how to play, lol).

The plot sounds hilarious as well. I would imagine that the majority of the Final Fantasy characters wouldn’t like getting ripped from their own worlds and / or universes just to play a little silly card game with the promise of a mysterious grand prize hanging in the balance. And I would absolutely love it if the final opponent in each of the six elemental tournaments are the main villains of the Final Fantasy games, lol.

A couple of question for ya, but is there going to be any sort of story in this game? Or it is just mindless Triple Triad battles? Also, are any of the different rule variations, like in Final Fantasy 8, going to be in here as well, like the Same Rule, the Random Rule, Plus Rule, and the Elemental Rule? Or is it just standard Triple Triad rules? Also, are any of the Blackmoon Prophecy characters going be in here as well? (Maybe other Square-Enix properties or Final Fantasy fan-game characters?)

Either way, this looks like fun and I wasn’t expecting you to make and announce something like this. (You’re just full or surprises, aren’t ya?) I’ll have to give this a go after I finish playing and reviewing the next game that I’m currently playing. But for now, I’ll give this a game a subscribe!

08/15/2021 04:26 PM
Holy shit - it’s about time! I’ve contributed images and words for the Theme Roulette for a while now and this is the first time that I’ve seen someone ACTUALLY get one of my words! Three of them even!

So I’m so sorry, LouisCyphre, Loriesquare and Beregon for the pain that you must now go through, but I’m also secretly pulling for one of you guys to win this whole thing. So don’t let me down!

08/15/2021 03:09 PM
So in preparation of FINALLY playing and reviewing Super RMN World 2: Yoshi’s Archipelago (three years later x_x), I thought I’d give the original Super RMN World another go for the first time in almost…* checks the date of his review * eight years!? (Wow.)

Anyways, after playing and finishing it again last night, the game is still as amazing as ever with every single level being just a blast and a general joy to play. There really is no level in this entire game that felt dull, or just passable, as they were all fun and somewhat challenging in their own way.

I also didn’t die as much as I did the first time I played Super RMN World. Even Cloudsdale Sanctuary and Fleetfeet Falls (which I used to die on SOOO many times) only took me a couple of tries to get through this time, once in Cloudsdale and three times for Fleetfeet. (Although playing as Peach made both of these levels a total breeze - so maybe that was my problem, lol.)

The extra abundant of extra lives also helps but also runs into the problem that you’ll have so many extra lives after a couple of stages that collecting any coins or 1-Up’s really isn’t as necessary as it should be when you find those secret rooms. You also get to keep all of your extra lives when you turn the game off and continue again, so that’s somethin’. I bring this up because I remember playing Mario’s Mansion 3 and how hard extra lives came in that game compared to something like Super RMN World where it hands out extra lives like candy in a candy factory. It’s not a huge deal (considering that most Mario games generally hand out extra lives a-plenty), but I guess it could have been better balanced with how many extra lives you get and how many you'll need.

There’s also a couple of oddities that you’ll have to get used to when you play a game in the SMBX engine again, as not everything from playing Super Mario World or Super Mario All-Stars translated into the engine one-for-one, like how when you get hit by something and when you shrink down or lose your power-up that only YOU stop moving but everything else in the background doesn’t, including all of the enemies. Or the time when I was riding on a Red Yoshi and ate a Blue Shell that you should be able to fly endlessly until the Red Yoshi either spits out the shell or he eventually eats the shell, but in the SMBX engine, you can only fly for a VERY limited amount of time while doing so, resulting in me slowly falling into my death in one level. 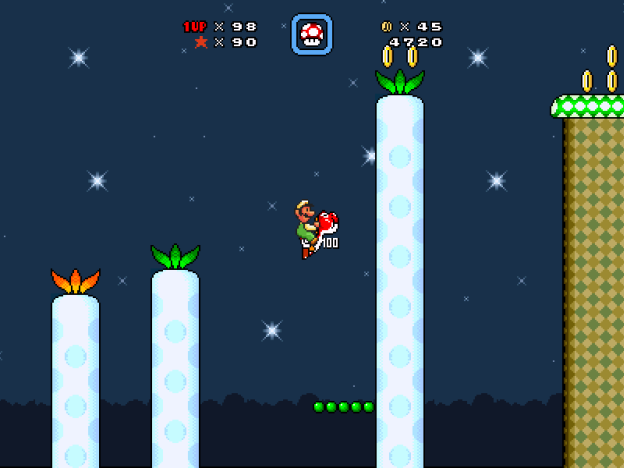 And speaking of Yoshi’s, apparently, in this level (24 Carrot Gold), Yoshi can eat the green springy platforms (which you can’t do in Super Mario World) and depending on what you do next, you’ll either have to sacrifice Yoshi in order to get up on the top of the platform or just, well...die and try again. If you try to go back in the level and try to come back to this section again, hoping for the green springy platforms to return, they don’t.

These are changes that I came across that I eventually got used to over time but it sucks that this engine’s isn't a complete one-for-one of playing Super Mario World or Super Mario All-Stars. It’s pretty close to replicating everything...but it’s not exactly a one-for-one.

There's also a bunch of other weird things that I came across, like how enemies can’t hit you in the tutorial level (but you can still drown though, lol). Or how ducking, when you’re big, underneath a long stretch can quickly zoom you across the screen depending on where your facing. Or how Link doesn’t take any damage while in Fairy form but does so everywhere else. It also sucks that when you return to a stage that you’ve beaten that you can’t simply just leave the stage and return to the gallery again, as you either have to die or manually quit the game and then go back to the start.

Still, even with these things, the game is still a blast to play. I think I played it for about five hours one night and I never realized how much time had passed before I had to go to bed to go to work the next day, lol. It’s definitely one of my favorite games on the site, with only Super Talking Time Bros. 2.5: The Last Levels being placed higher.

So hopefully, Super RMN World 2: Yoshi’s Archipelago can deliver on the goods! If it’s anything remotely like this game is in terms of quality and level design, then I think you guys will be pleased with the overall score!

(Oh, and thank GOD that you didn’t make the final level, “Our Gracious Host,” a gauntlet because that level would be SO HARD AS BALLS if you had to do everything in one life, so I appreciate the mercy, lol.) 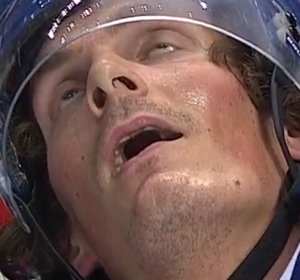