Close
A cloud with wings in space ~★

author=Make_it_MagiK
Yeeeeeyyyy!!! The demo is out!!! I will immediately download it and PLAAAY!!! *Really excited*

Edit:
I have just ended playing it now and I have to say that it was... AWESOME!
The story, the characters (I immediately LOVED Nathan! >u<), the setting... I just loved EVERYTHING! Everything caught my interest! Anyway, I really enjoyed it and can't wait to play the complete version!

Here are more details of what I think of the game... SPOILER ALERT!
Show
The story is very interesting, and it really caught my attention when the mom died... That cutscene with the mom in the storage room... *SIGH* it was really touching. First I thought it could have been my fault, I mean I had chosen the wrong choices, but then I understood that it was actually the storyline... so SAAAD!
Like I said already before, I immediately loved Nathan. He really is a nice character... After the death of his mom, it really touched me the fact that Nathan became so "silent"... Do you know what I mean?
The dialogues were also very well written, I liked the fact that sometimes one character doesn't end saying something because the other one anticipated him/her... it looks very realistic! Besides the dialogues were very nice to read, they weren't neither boring nor too long.
The graphics are also very well made, and I particularly liked how the characters were drawn... Andrea looks so pretty >u<!!!
I have a question though... it may sound really stupid, but I wondered whether those "vegetables" in the village were really vegetables, or they were humans but looked like them only because of their names? (e.g: Ms. Kiwi)... I know it's REALLY a dumb question, but it really interests me... although I don't know why O.O

AAAAAAH! Thank you so much Magik for your response and feedback (it means a lot to us) Ｏ(≧▽≦)Ｏ

Spoiler warning up ahead!
Show
First of all, don't be ridiculous that isn't a stupid question.
Secondly, well I guess when I was designing the vegetable people I always thought them as anthropomorphic vegetables? I know that sounds weird ^^; but the best way to describe it is if we were to take a disney movie(zootopia in particular) we could see there are animals that exhibit human characteristics. The same for the vegetable people! They are still vegetables but they share common traits with humans (they can walk, talk etc.). They're vegetables but act a lot like humans (so I guess they aren't humans). Same goes for the squirrel bard and the birds in the village. I hope that answers your question :)

Oh thank you so much!

(sorry I didn't reply earlier we were busy on making sure the demo came out) ^^;

author=Make_it_MagiK
WOW! The game`s description sounds veeeeryyy interesting!!! It has quite a "mistery" feeling, which I LOVE! Besides the graphics are JUST wonderful! Very well done! Can`t wait to play!!! >u<

Thank you so much Magik! I'm glad that the vague description didn't seem like much of a turn-off and instead intrigued you. ^_^

author=visitorsfromdreams
Subscribing just for the logo!

12/02/2016 05:57 PM
Wow I really like how everyone's interpretation of a child's drawing is so different from one and another! 〃＾▽＾〃
I'm giving this a shot despite me not being amazing in this sort of thing ^^; 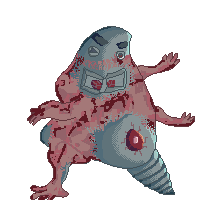 Coulddas composes off several cadavers hidden and stuffed away in a robot suit. Yet over time the outside has slowly rusted away. Using the energy powered by the vengeful souls of the people that have perished, Coulddas hunts down others to add to his collection of carcasses to make him even stronger.

He doesn't inflict a lot of damage yet since there are so many bodies all inflicting damage at once his overall inflicting damage becomes immense. But this can also be his weakness as with many souls being inside you there lacks any unity which leads to low accuracy at times. 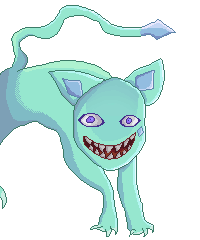 To say that a Peelc can be deceiving is an understatement. He often has a welcoming face, lovely hospitality and yet by the end of the encounter he can make the trip to hell sound like a vacation. However, if you see through his tricks it won't be as inviting or as...friendly...

When it comes to combat a Peelc isn't as strong at it seems. He mostly decreases your attack by playing mind games on you. With a swift body a Peelc tends to avoid attacks often. See through his lies and once the effect wears off it'll be easier to beat him. 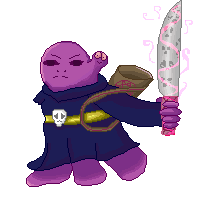 Long ago the poor Neri had a mine of his own, until the parasite Balbo infected him. Neri used to lead people to the afterlife and guide them. However Balbo pierced the side of Neri's head and controlled Neri from there on. Balbo uses Neri's mystical powers to kill those that are the most happy; to use their joy to make him experience it whilst trapping the crestfallen spirits in Neri's blade.

Balbo has a massive advantage with controlling such a skilled and knowledgable swordsman like Neri yet without the body Balbo is helpless. It may be hard to get an accurate hit of Balbo himself(maybe 8% chance?) but once you managed to damage its achilles heel, you've won.

10/31/2016 03:51 AM
Was SO CLOSE to getting something done but I don't think it's ready to be uploaded yet. Congrats to everyone who did manage to get something done though! Maybe we'll have it up by this evening/tomorrow morning or maybe a little later. Who knows?
Pages: 1