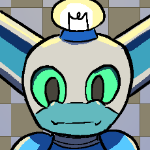 I've always been a fan of videogames, especially Nintendo. My goal is to create some weird and wonderful games, experimenting with ideas and creating a polished, complete experience.

I aim to make distinct style of game, with odd characters, but strong mechanics. Games that people can play and recognise as an "Azzie" game.

If you ever play any of my games, and have any thoughts, feel free to give feedback or advice. I'll greatly appreciate feedback and criticism, and always looking to improve. 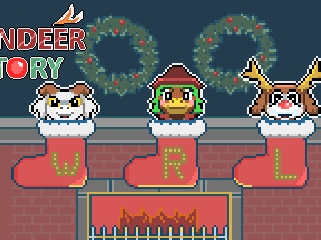 08/29/2021 10:40 AM
To elaborate further I've been thinking about distinguishing the enemies with
a dark colour and a red outline.

I might use certain designs for harder to dodge enemies. Currently you can outrun them all but I might make some closer to the players speed.

Currently I have it so enemies stop pursuing the player if the players jumps up to or falls down to a lower platform. I might put a flying enemy type in as well that ignores the terrain and can trigger a battle while the player is in mid-air.

author=Mirak
Only thing I feel is how dated my dialogue is going to be a year later lel.

Could be worse. Your dialogue could include something that could only possibly make sense if it was still Christmas 2020. :(

author=OzzyTheOne
Oh, that does sound like an interesting idea! And giving the player "priority" targets based on the enemy's move set is always an good thing I'd say. I know that whenever I play a game and a group of enemies has this one enemy that has a nasty attack or can inflict a nasty condition, I usually go for that one first to make the rest of the battle easier.

I think that the the idea of there being enemies inside the box and outside of it can add a healthy ammount of variety.

Yep, that's the equivalent of what I want to do with it.

How can Designers Create Levels to deal with Unflexable Players?

05/05/2021 11:06 AM
I think the most you can do is should do your best to make sure even the least skilled player can keep on track and not get lost in the level

If a player is going to basically go out of their way to frustrate themselves by taking the longest way even when a shorter option is available. There's not going to be much you can do to convince them without becoming intrusive/obnoxious in telling them "Go this way".

But if you think about it having the player decide to take a pointlessly long route back is better than the player feeling lost or not knowing how to progress.

05/04/2021 08:43 PM
Thinking about combat of Reindeer Story feel unique and distinct. I'm making it in Gamemaker2 The Battle system is like Deltarune's but without the spare mechanic and with the characters themselves running round the Battle Zone while the enemy attacks rather than a heart.

I mostly focused on the typical bullet patterns for the prototype. However I'm experimenting with and contemplating having certain enemies spawn the Battle Zone/Box the player has to run around in during the enemies turn.

Some may just be static and take up a section of the battlefield, some wander aimlessly, or bomb enemies that explode if the player gets near(a bomb). To make it a bit more hectic while you're dodging bullet patterns from standard enemies. I might even make some encounters just a bunch of enemies in the box.

I'm thinking I could make some more engaging encounters if the player has to decide whether its worth it to clear out a certain enemy in in the battle box first or focus on the ones outside the box firing bullet patterns.

Thanks! At the moment there's still a few placeholders like the backwall is just the outside mountain wall, and I plan on putting a few things in the cave.

But I've sort of got a plan of blasting through the games content/scenes/battles this year. Then going back over it next year to polish things up.

author=kentona
Norway! I came in here to Czech your progress and am Hungary for more!

Israel nice to hear that.
Pages: first 1234 next last