The most complex thing I've done was in a horror game, I made two items, "Gun Loaded" and "Gun Unloaded" and different bullets with different "blessings". Basically, if an enemy was weak to a certain blessing, he would stop in his tracks, twich, and you'd be able to interact with them (By shooting the bastard) but since other enemies were strong to a certain type of bullet, they would keep chasing you.
In order to load the bullet you had to interact with the item via menu and load or unload the gun with the type of bullet you wanted.
To this day I have not been able to replicate this again...

So, about Armored Core...

12/21/2015 03:50 PM
I've been craving for a good mech game. I mean customization, big battles and such.. After researching the only games that really caught my attention were Armored Core and ZOE. (Also steambot chronicles but the bastard is expensive.) So I decided to buy armored core, but my question is, which one is better in terms of customization and mechanics? I've heard many people say that AC3 was the best and people are polarized about the recent entries.

I'm bored, can we insult each other for a while?

12/19/2015 02:43 AM
Holy moley, I've been out of the loop for a while now. I've been playing Growlanser Heritage Of War for a while (It's annoying as hell sometimes.) That pretty much started this.. Thing.
What do YOU like about JRPG's?
Pesonally, I enjoy when the game has some nice characters or an unique, interesting setting. Alot of JRPG's tend to rely on cliche'd characters or settings that, well, make me cringe.

Disgaea 2 for example, made fun of many of these cliches (It still made me cringe sometimes.) And had alot of fun characters.

Persona 4 went full on JRPG with its "friends are everything" and the mascot character and the little kid who calls you big bro...

So, yeah. Speak out.

[RMXP] Anyone wanna help me with a tileset :D?

01/08/2015 10:02 PM
Once upon a time.. I had a project.. It was going smooth like butter on a baby's face when he finished eating his meal... Well... Damn project went to hell.. So I started a new project, a simple and small project.. It's about our hero who gets killed and hanged in his school rooftop at midnight, because of his sudden death he becomes a ghost who is bound to the school. The game has simple minded cutesy(?) graphics and is supposed to have certain users in this site including me and other people I come across, mocking them and making fun of it, along with other cameos. I'm a veteran with RPGXP, but when it comes to graphicz... Well I'm okay drawing chars but tilesets is my biggest issue.. I just need some tilesets for the game...

I don't need anything fancy. I want some tilesets that go with this kind of graphics (BTW this is the actual MC.) 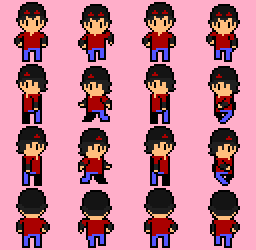 As you can see the graphics are pretty simple (almost earthbound like)
Also, the size of the character is 256x250. Any help would be appreciated and will be given credit *Smiley face*

This is in RPGXP btw..

Watch Dogs worth it?

06/02/2014 02:23 PM
It's the first time I post here... at least in THIS section. I'm sorry if this is the wrong place to ask but, is watch dogs worth it? I heard that the story isnt that great and that the graphics arent what was promised, but to be honest, i never really cared for these 2 things in the first place. I want to know if the whole vigilante gameplay as they said, can you go around in the game world saving people in danger? Is the hacking element any good? Gunplay? What can you tell me?
Should I wait for this game to lower its price or.. what?

Looking for a specific sprite

03/01/2014 07:19 PM
Well not just one, but a whole pack, I remember some time ago, i stumbled upon a school pack where all of the default RPGXP character have school uniform, thats what I need for my current game but I cant seem to find it anymore...

12/11/2013 02:27 PM
So like, my game is big, big enough to have an obvious fast travel mechanic.
But in my game I also included side jobs. In which you can obviously make money. but only once. Because once you complete the job, a switch called "TIRED" activates, the only way to disable it is to rest. You can pay at the inn, or you can just rest for free at your house of course..

That's where the problem comes in..
Let's say that you made alot of money in a side job. Now you need to rest, will you pay at the inn, or just do it for free at your house?
Of course, you warp back at your hometown, you sleep, then you return at the location of the job.

Basically, you farm money. And that's something I don't want players to do..
What should I do? Should I remove the fast travel? Should I keep it? Should I change it for something that doesn't affect the game mechanic?

Can anyone give me some advice on what should I do when it comes to indoor mapping?
Im using RPG maker XP by the way.

07/15/2013 10:49 PM
Like, im making a little side project here.. where you investigate myths and stuff..
What I want to do is:
-When you enter a map random events appear to help you or to make your life harder (Fallout style) like finding blood, bodies, some dude with information...
I am a visual learner, soo you might want to take pics or just explain step by step :P
Thanks in advance!
Pages: first 12 next last