A score table of all the RPG Maker Games I've interacted over the years. Some may change depending on the situation. 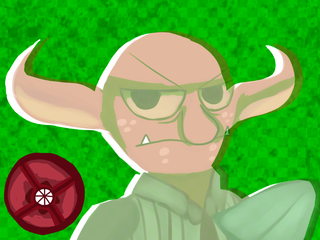 Be the one to set them all free. From both their pain and their past.

author=LockeZ
I did think Whimsical Misadventures of Cinderella was FUN, but it fell short of the spooky theme. I didn't get the sense that it was supposed to be "dark" at all, honestly, which was a problem that a few other games also shared. Also it was several hours long and I admit I didn't finish it, so maybe there's a really horrible scene at the end. It was an actual RPG, though, so that was nice.

I would like to thank you for giving your thoughts on the game. I will admit that the dark themes are barely everpresent in the game. And honestly, the game is never really subtle about it. Honestly, I came onto this event not out of winning and more so because I wanted to collaborate with Starmage. And the result was that game. We had quite the blast working with that together and I'm glad that, while it missed the mark on the theme department, you find it fun. I don't know how far you made it till you stopped since it is a pretty long RPG, but thank you for playing it regardless.

Congrats to all the entrants, especially to Darken who made first place for fitting both criterias very well.

author=WheelmanZero
All in all, I'm a little stressed, but I'm still feeling pretty good. Thanks for the encouragement, ghostbro!

Okay. Now I'm starting to feel bad for pushing you to do "the thing" when all I've done so far is just watch you continuously impress a lot of people. Seriously...

But no. I really hope you don't force yourself anymore. I've expected enough that promises aren't going to be made with you thanks to this. So... I hope you would focus on Umbral Soul. Since that seems like what people want anyways. And the 48 page comment list is a thing to behold, let me tell you. Hahaha..

author=matski
Out of curiosity.... has anyone been able to beat the game in hard mode? I been attempting the game in hard mode and at the third blood boss. I am close to the point where that the ultima spell is overpowered as even while "defending" at lv 17, it will kill your party member.....

If you are going to tell me to reduce the difficulty, then what is the point at making a mode that is almost impossible to beat?

I do. I beat the game in hard mode. Check this for more details on that and what I used to beat them. Though you might be reading an essay for it.

Wow, what were your character levels in your video for the third blood battle boss? (I'm at lv 19 and going to try again).

The biggest problem in the battle is there is no clear warning on when the ultima spell will be casted.

Unfortunately, I was at max level (lv. 30) when facing them. Meaning I have the luxury of better equipment and accessories.

As I recall, a red spiral will appear to one of the enemies before Dark Ultima appears. And if you don't guard or set up lots of defensive shields during this time. It will likely knock you out. But I agree that because the mechanics were only warned once during the first fight that has Ultima (Namely Minerva), people likely won't remember the timing needed to avoid it nor the indication was very clear since you might forget it.

author=matski
Out of curiosity.... has anyone been able to beat the game in hard mode? I been attempting the game in hard mode and at the third blood boss. I am close to the point where that the ultima spell is overpowered as even while "defending" at lv 17, it will kill your party member.....

If you are going to tell me to reduce the difficulty, then what is the point at making a mode that is almost impossible to beat?

I do. I beat the game in hard mode. Check this for more details on that and what I used to beat them. Though you might be reading an essay for it.

Also, yeah my uncle lives there.

(P.S. Don't use Mediafire. If you have a popup blocker, they try to ask you to subscribe money. Unlike Google Drive and Box.com which mostly leave you alone)

Wow, you did a good job capturing the "spirit" of Detroit.

Our apologies for that. We primarily use Mediafire and often times we don't get this sort of issue. Mostly because we didn't get that sort of thing. But we now have added a google drive link as well as a direct link here to prevent people from using that as a download source. The Google Drive link will also be the main link for this page's download. (Provided that it works.)

04/30/2018 11:06 PM
I'll be honest. After 9 entire reviews, finally I can share my thoughts. Because honestly, I was afraid of putting my own thoughts here because everyone claimed it to be the shining perfect sparkle of a gem that shouldn't be touched. But now that someone looks at it with a more critical eye, I think I can freely share my thoughts on the matter. Yeah. I agreed with most of everything you said, Scourge.

I always knew that Umbral Soul had a few spots that I find... weird. (and it's not just because of the many thiers this universe concocted over the course of the game)

That being said. Let me add an addendum for my own thoughts on the subject of design. While the level design, for the most part, is pretty well polished. There's one level that irks me so much that I had to look it up in order to solve it.
Show
The Vampire Castle. The puzzle that requires you to listen to the sounds and ensure you choose the correct order in order to pass.

If I ended up having to look up a guide because of it, then that's just really not well designed. Players are expected to figure it out without relying on external sources (unless it is part of the experience, in which case it is an exception).

I do agree that some characters get the better end of the character development treatment than others. This is more apparent at the later stages of the game. And I don't blame the developer for that. Juggling through a massive cast of characters and giving them their unique charm is an undertaking in and of itself. That being said, I hope the sequel improves on what the first one lacks. Such as the encounter rates and the pacing (and the fact that the previous version has lots of thiers, its like their is a taboo word or something).

The only thing I would say that I would play counterargument with is that the writing is very subjective to a person's experience. One person may enjoy writing where others may look at it pedantically and find gaping holes or gripes they find that loosens their immersion. And for that, it's perfectly understandable. You may not necessarily love it. But I certainly find its cheesiness to be the attempted comical factor that I find somewhat refreshing in some scenes. The hopelessness and the feelings of despair and the raw emotions sounds way too flamboyant, but it speaks to the heart in some cases and it kinda tugs a little on my end. I especially like the bonding between Pandora and Draconus even though, from a writing standpoint, it sounds like it looks a little out there. (And I used him all the way to the end because I liked him that much) But I agree that it isn't perfect.

Show
The Baker scenario does highlight the more near exemplary example of Wheelman's writing and he claims to enjoy writing that one the most. So I'll assume that Wheelman can write incredibly well when he considers a lot of the intricacies of the world and takes the time to pay attention to a lot of the characters' developments. But considering how massive of a game this is and how the world and characters are so massive you can't keep track of everyone in your head, well.. who can blame the more less than favorable writing.

Again, for all that I harped on with my own gripes, I do enjoy this game. It's a strong showcase of an interesting premise. All I'm hoping for is that the sequel can mitigate the issues in terms of the writing for some of the characters (but considering that you have been developing that last year, I doubt there would be any major changes to the script at this point).

Transparency and Future Updates on Concordant

author=suzy_cheesedreams
Your tiles look fine. I just realized there's another artist who made some of the artwork? Everything looks much better and obviously more cohesive with the new graphics rather than the RTP, as you've said. I make edits of the RTP for tiles and such too for my stuff.

Ah, I see now that the frame with the darkened edges is on every screenshot. I'm sorry if I've criticized something you've designed to be more accessible/to better suit a different level of visibility (and if this isn't the case then I apologise for making assumptions!).


Ah. I see what you mean. To be honest, that was intentionally placed there. But I think I understand how you would come to that conclusion. It's alright. I've made assumptions as well. So you're not the only one.

As for the other artist, in terms of characters, there are a few that are taken from Aekashics and other parts artists. I haven't credited them yet but I will add them to the credits section once I've changed the description of the summary at some point once I get the chance. Funny thing is that one of the characters is actually taken from MV's Minotaur from the RTP. So really, in terms of characters, not all of them are 100% original. Still, this game isn't going commercial, so I have little issues using them as bases and recreated using my own style. Just thought I clarify that.

There are other characters later down the line that will be inspired from a specific game I have a specific fondness for, but I'll talk about that when I get to it.
Pages: first 123 next last