I've made puzzle games.
I want to make other games now. 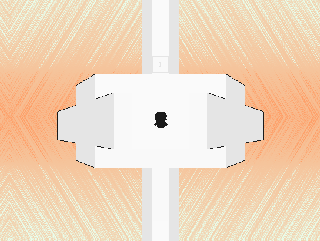 It's a puzzle game.

I initially planned for this game to be perhaps 10 times as long as it is now! With a full story, with beginning, middle and ending. The story was only beginning to warm up.

Is he/she/it a God? Is the developer talking to the player? We do not know and we don't care because we're here to play a game

This definitely would have been addressed in the long-term story. Maybe one day I'll finish this! I've got a project I'm working on right now ("Paper Thin") but maybe afterwards, I'll quickly make this? Haha.

I find this to be a sort of "rollercoaster experience": you start with some simple puzzles that becomes more and more difficult, then BAM! Suddenly you find a really easy puzzle (sometimes these aren't even puzzles at all, just rooms where you can learn something new)

Ah, thank you for making this observation! This was definitely intentional, and inspired by the Metroidvania genre, where in games like Metroid Fusion, I noticed that once you gained a new power, you would be trapped within that room until you figured out how to escape it. This way, I would force the player to learn the new mechanic before they continued. In some areas, you can try to skip the initial puzzles, moving on to Puzzle #4, for example, without completing puzzles #1-#3. Technically, you could finish it! But I like to think that while Puzzles #1-#3 were optional, they were training for Puzzle #4 especially if you aren't ready yet or don't understand all the pieces and their use.

I was going to expand this to several areas, adding new mechanics and re-using them with reckless abandon! So the idea is that it would just open up into this massive area where you encounter something you don't know yet, but then you learn it later, and come back to unlock that area. If I redesigned the areas today, I would probably have even more "unsolvable puzzles" early on, whose logic was explained in later areas, that you would return to once you realised you knew what was going on. That was part of the initial aspect of the game, but only now do I have enough experience analysing and creating games that I know how to implement this. :D

Thank you so much for this review! <3

I will be playing this on this Thursday 23rd 3pm EST YEEEEEEEEEEEEEEEEEEEE come join us then when we play it https://twitch.tv/bennymakesgames

I will be playing this on this Thursday 23rd 3pm EST YEEEEEEEEEEEEEEEEEEEE come join us https://twitch.tv/bennymakesgames

12/14/2021 07:33 AM
Just played Karma Flow on stream for the first time, and I gotta say, it's really impressive! To see OldPat stretch the 2k3 engine like this to create dynamic stealth missions, with lots of non-linearity and side missions that you have to complete... it's total vibe! OldPat's sense for the dramatic, for creating vibes through music, graphics and story beats put in the right places, makes this a real treat to play.

The gameplay was confusing to me at first, but I think after a while I started to understand. It took me a while to understand how missions, sub-quests, getting notice via "Alerts" and all these things contribute to your overall "Karma Score", and how that contributes to whether you get "clues in game" and stuff. It's a very complex system, and I like that it exists! It's unique and I think I can count on my hand the number of RPG Maker games that use systems that are this complex, that are of the developer's own design (I assume! If it's directly pulled from other games, then I simply haven't played enough non-linear stealth games, then, have I? *sweat face*)

But the gameplay was very challenging, especially the final stage. The cover system was very punishing also! It's well worth the ride, particularly for OldPat's storytelling abilities and the game's general vibe and atmosphere - it's constructed really well. I think that with OldPat's successive games - PSYCHE Locke and The Lady Puppet, OldPat's ability to ease players into the game's experience have only improved with time. I feel like with Karma Flow, there was a massive text tutorial at the start that I caught maybe 40% of, but then had to learn the other 60% just by experimenting. I've found that I learn best as a player if the game teaches me one mechanic at a time, generally speaking. But once I got the mechanics down, it was a lot of fun. I might even return to 100% it!

12/12/2021 11:59 AM
I was recommended "Mouth Sweet" by the community - they nominated it as RPG Maker Cola's 27th best RPG Maker Game of all time. I've just played "Mouth Sweet" and I gotta say, it was really fantastic, innovative and interesting all the way through, despite my personal misunderstandings of a couple mechanics that initially left me frustrated, but after I'd realised what my misunderstandings were, my appreciation of the game suddenly grew, until I can finally say that I love this game!

I loved the way that the graphical style, music and especially audio (!) contributed to the overall surreal feel and style of the piece. I feel like it greatly supported the narrative of someone being stuck in a dead-end job, being forced to do immoral deeds under an oppressive structure, and not being able to escape. The "Mouth Sweet" title still evades me, but somehow it seems fitting to the themes of the game? I'm not too sure about that, but hey, I can just say that - it feels right?

The central mechanic was also extremely well-done, I feel, and very innovative. If there was anything that was frustrating, it was because I failed to understand initially that you could initiate a battle with the unseen foes BEFORE they brushed up against you. It was only when I approached enemies that required TWO shots (another thing I didn't understand initially) that I realised I was stuck. It took me searching a YouTube walkthrough to find out what you actually had to do - which was to initiate early. Once I'd figured this out, it all became clear, and suddenly, I was the master of shooting.

I liked the sense of panic you get when running out of bullets. In some places, I thought it might be possible to softlock yourself out of a win, but in the end, I got through, by just winging it and hoping that I didn't get encounters. So that was okay in the end.

Overall, I feel like it was really interesting and personal expression of the way that the developer was feeling at the time. I love when a game feels like a personal love letter to their audience. It's really quite nice. I am also happy to know that L.O.V.E. games is still creating games until this day, 5 years after "Mouth Sweet". I don't have any claim over the authorship of the developer's life (of course!) but at least I can say it somehow makes me happy that they may have been able to get what they wanted by expressing themselves through this game. Again - judgements here abound!

All in all, I thoroughly recommend this game, and I think it deserves its status as one of the RPG Maker Classics. <3

11/03/2021 07:25 PM
This is such a unique game with an ever-oppressive atmosphere! I will preface this by saying that I didn't anywhere near finish this game (just played the first 2 hours) and I was in a highly sleep-deprived when I streamed this, but it was still so unique and like a fever dream! This is developed by zDS' brother, and for some reason there's... similarities in their games? Both are highly moody, melancholic games, except I think PsiSteve's game here seems to have a higher dose of the surreal and Lynchian. It's like... there's so much here that doesn't make traditional "sense" and the game operates on the flow of its own logic. Supermarkets, and a largely non-linear space that doesn't really have too much direction baked into it? It's funny that even after a couple hours of playing, I didn't know where I was going or how I was progressing. Again, it could have been the sleep deprived state I was in, but hey. I still very much appreciate this game for what it is, even if I'm not sure it's exactly the game I like to play. It doesn't push you in the direction you need to go, so a person with the specific brand of ADHD that I have finds it very difficult to understand where to go at a particular time. Plus, I wanted something perhaps a little more emotional in the story department to latch onto, which is just a personal preference for coherence, perhaps. But then again, it could bring it all together in later sections of the game. Yet, when I think back on it, I can't help but be in awe of what's presented, and definitely think about returning to it, that hazy, surrealistic world of confusion and chaos presented. Love it. Thanks for making this.

11/02/2021 11:38 PM
I never actually commented here but... Ah my goodness. This game's storytelling and setting was so intimate and dangerous and... classy. The art in this is wonderful. The storytelling is pristine. The pacing? Gorgeous. You wake up near a bus stop off the side of the road and you're wondering what happened. It just gets more and more involved as it goes, in a masterclass of storytelling and characterisation. Loved this. Enjoyed this so much, Ronove, and can't wait for whatever else is in store, no matter what. Sheesh, this game is so good!

11/02/2021 11:37 PM
I didn't actually post my full thoughts here because i get lazy when writing reviews but now that it's come Misao time i must say OldPat you're making it hard for me to choose "Most Promising Demo" here. Okay, it's Lonely League, Nihilo or The Lady Puppet so far. Frick. This game is so tense, and bloody, and beautiful, and... gorgeous? It definitely has that cabaret vibe going for it that's unmatchable. The demo I played perhaps a couple bugs with the chasing mechanics, but in future demos that'll be improved, as OldPat shaves off all the bugs and polishes this to a beautiful sheen. Can't wait to play the final product. Wishing the very best for the commercial release happening later on! Yeah, this game... gorgeous. Bless.

11/02/2021 11:36 PM
Okay, so... this is in demo phase, and it's definitely giving The Lonely League a run for its money when it comes to "Most Promising Demo" in my books. Absolutely polished from front to back, immaculate post-apoc vibes, brilliant dialogue, pacing is on-point and OH MY GOODNESS THE MONSTERS WTFFFFFF. They are so gorgeous and this world is so gorgeous and a lot of the menus and stuff are going to make more sense the more this game is developed but AS IS, it's just... crystalline. Let's go, Giznads. The gameplay, the graphics, the tone, the pacing, the everything. Let's just keep going and get that full released game. Everyone should play this <3
Pages: first 1234567891011 next last