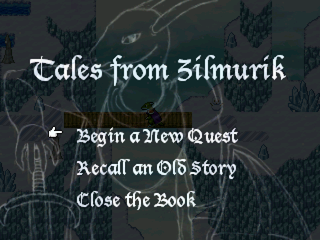 Epic of Damnation and Redemption

12/11/2018 11:45 AM
So I'm watching some videos out there on the Tube and they're not exactly the happiest of the bunch; reviews of Plague Dogs and Watership Down - you know, that sort of thing. Really bummer stuff (and inadequately rated, if I do say so myself), but that's got me thinking: how far have we pushed the envelope in terms of graphic violence in our games? I can think of some uncomfortable examples and the people who made them, but outside of horror games and their tendency to use blood and gore as a cheap fright ("ooo, body parts... it_is_a_mystery.jpg"), what are some of the more gratuitous examples of an 8-bit, one point, shredding Prickly People Pulper?

Has there ever been a need for more than a Teen rating for RPG Maker games? I'm morbidly curious.

09/06/2018 07:39 PM
People like to discuss the possible intentions of a story or a character being written in such a way. What is the author trying to say by writing their this or that character as the villain or the healer, etc. Sometimes arguments break out that seem to derail what else the game has going on in it or its other qualities that were clearly intentional and not just hypothetically. What if the author very much meant for this to be how the character is written? Even if it's uncomfortable (not criminal, just disconcerting), shouldn't they be given a pass as a legitimate contribution to the story?

What if it isn't necessarily the character but the scene? If you're establishing a serious or disturbing mood, how often do you allow the characters to joke around before the shit hits the fan? At what point do you run the risk of ruining the narrative? What if you weren't meant to be jokey yet what you've created ends up producing an unintentionally comical tone? What if you're convinced that it has to be this way in order to get your point across?

Maybe you would like to answer some of these questions or give your experiences on the matter.

[Poll] Idea for a Game Jam

You know what we should do? We should do a replacement McBacon Jam and call it "Save McBacon". The goal is to remind Zeigfriend how much he matters to each and every one of us and make him feel better about his contributions to the site. Consider it a love letter of sorts. If you participate in the thread/say a good word, you get the "Helped Save McBacon" achievement. If you produce a demo/full game, you get the "You Really Saved McBacon" achievement.

The pun here being the idiom "you saved my bacon".

The graphics for the achievements would probably be the pig he's got now for the first and the pig with an accompanying green up arrow or pluses or "REGEN" over it.

07/13/2017 10:08 PM
In before this gets C&D'd. If it doesn't happen before Saturday, download it immediately and treasure it forever because Capcom is never going to do what Nintendo did with Super Mario Bros. X and make their own. That being said, if it does survive (highly unlikely) do you think we'll get a jump on creating community games with this?

EDIT: "I'm not a robot" has never made me smile more than it does with this thread.

06/11/2017 02:09 AM
After a "short but brave battle with leukemia". Most people remember him for his role as Batman in 60s Batman and Mayor West in Family Guy, but I remember him as Catman in the Fairly OddParents. Discuss.

04/10/2017 07:47 PM
I was doing a lot of thinking about my childhood last night and a certain game came to mind. The game: Sesame Street 1-2-3 for the NES. The longing effects it's had on my mind has been nothing short of momentous, but for all the wrong reasons.


23 years later and I still remember how deeply this game upset me, but I can't put my finger on exactly why. I know it had something to do with the moon, but was it just that? Was its dead set eyes and sunken features so jarring that I set it down then and never picked it back up? That I would actually bring my mother into the room to beg that I never play this game again - to leave learning to schools - and return to happier times with Mario and Kirby?

It should be stated that I never had a problem with Ernie and that the use of colored shapes to construct images of stuff like birds is something I quite like and would like to see return in games even meant for older folk.

What could've been an excellent teaching tool for young children centered around a familiar and well beloved television show set in a medium that encourages play suddenly became the thing of nightmares for many (just view the comments section of the video above and you'll see what I mean). And the strange thing is, even though the signs of mental scarring are clear, I don't blame Rare (this game was made by Rare, by the way; not a crowning achievement in the slightest) for what they set out to do. They knew exactly what they were getting into and clearly wanted to make something good and helpful for early development... but they failed miserably due to one or two fatal flaws.

The biggest of which is the overwhelming sense of negative reinforcement of failure pushing the player away as opposed to the positive reinforcement of succeeding encouraging bonding with the product and the lesson at hand. Shigeru Miyamoto once described his game design approach towards Super Mario Bros 1 as giving the player a safe place to experiment with the game before moving forward and finding surprises and rewards that would "make them happy".

1:00 for the quote
Sesame Street 1-2-3 could've used this sort of reward system to help counterbalance what ultimately made its way into the product. You see, in early learning (at least in the States), it's common practice to give young children snacks (animal crackers and juice boxes, typically) in the middle of a teaching session and/or candy or colorful stickers for succeeding to keep them engaged. While this sort of thing isn't possible with a Nintendo cartridge, they could've broken up the lesson with fun mini-games that made the player feel good and gave them something to look forward to.

Instead what we were given were creepy depictions of our favorite Sesame Street characters (friends, really) and a celestial being that was disappointed in us (nobody else in the silhouette of the neighborhood, just us) for making mistakes; mistakes, mind you, that are pivotal to the learning process. The failure jingle didn't help, either.

But the instruments of learning are all there, and that's what disappoints me the most about this game. It could've been so much more if only one or two things were changed to make it less upsetting, but people only remember it for how badly/scared it made them feel and how it made them cry because they didn't understand why they were being punished by their friends on Sesame Street.

Did you ever play this game growing up and did you have a similar experience? Or do you know of any other games that just barely missed the mark? That despite having what seemed to be every item on the checklist present just didn't succeed in what it set out to do: provide an entertaining experience.

EDIT: Shortly after submitting this thread, I found another video hosted on Vox's Youtube channel that further interviews Shigeru Miyamoto about his design philosophy and what's made him such an iconic designer over the years. Most of this you'll probably already know, but I feel it's a good watch all the same.

Kneeling during the Anthem?

10/12/2016 11:22 PM
We've heard of the sports stars, celebrities, etc. doing this, but now there's Leah Tysse, breast cancer survivor. Some (most) are claiming she did this because her career is in the crapper, while others are actually wishing the worst on her and saying that she should get "more cancer". This might very well be the most divisive subject in America today, because it takes a time honored tradition and tries to poke a hole in it. Some people understand and respect it, others (some of which have fought for this country and want some damn recognition and honor) consider it extremely disrespectful and anti-American. What say you?

Because I'm one of those people who has a problem picking a side when there's so much at stake, I don't know who to side with. Where does the line from justice end and injustice begin? My grandfather served in Korea, he was a good man (flawed like rest of us) who unfortunately passed away in the summer of 2005. If he were alive today, I'd like to think he'd be like the Vietnam vets who burned the flag because it was just cloth and didn't represent what they were fighting for, but he saw the wages of war. He nearly got blown to kingdom come by a landmine while on duty, and saw the ones who took his place (he was riding behind them).

I want to honor those who've fought - who've died - but I know there's something more we could be doing. I'm torn.

10/08/2016 08:53 PM
This is an odd discussion, but I'm one to think outside the box, so let's get this started. Have you ever played or seen a game that for whatever reason struck you as something that if it were edible, would be extremely tasty? Maybe the graphics have a strangely food-like feel to them (we're not necessarily talking Kirby's Adventure's Ice Cream Island) or maybe the music just feels crunchy and peanut buttery? I'm not expecting this topic to explode given the subject matter, but what the hell, let's give it a go.

My game would be Darkwing Duck for the NES, namely the turtles that sneeze and shoot their shells at you and the "thickness" (for lack of a better word) of the sound effects. For some reason, that's always made me hungry.

I don't know what to feel about this one. Sure, it's topical with the whole recent clowns epidemic, but it seems that the only keepsake animatronic this time is Freddy, aside from a fully compiled "The Mangle" which frankly makes no sense.
Pages: first 123456 next last