Close
I develop games and I write. I have a Bachelor of Arts in creative writing and journalism. I like writing speculative fiction, horror and literary fiction, sometimes all blended together. You can find elements of my writing in my games, because I consider my games to be stories just that happen to have gameplay. 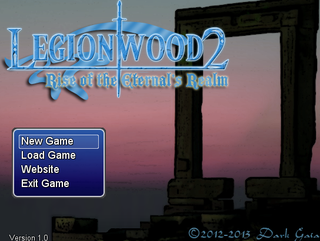 A sprawling J-RPG game and direct sequel to Legionwood: Tale of the Two Swords.

Heroes of Legionwood: Age of Darkness

09/12/2015 11:13 AM
The Magus class does have a lot of early unique dialogue options, but really your class has no bearing on the story. Cleric and Rogue also tend to have a lot of unique options. The story's written so that any class will feel equally important to the storyline.

05/06/2015 03:25 AM
Gender affects which of the two NPC romances is available to the player. Other than that, it's merely a cosmetic choice. I'm all for gender equality.

05/04/2015 02:11 AM
Yes, you can choose Locke's gender and class. I was also planning for the player to be able to choose Locke's race as well, but there wasn't any time to implement that.

05/04/2015 02:11 AM
Heroes of Legionwood is all about stopping the Darkness, so you'll definitely get to find out more about it. Keep in mind though, if you explore the Emperor's Citadel, you'll find Terminus who can tell you more about the Darkness' origins.

I'm glad you enjoyed the game :)

04/28/2015 11:34 PM
I know exactly what you mean. Most of all, I think an RPG that adapts to the player's choices is more reminiscent of a pen and paper campaign, which is an experience I'd like to emulate in a PC game.

Unfortunately, I think the episodic nature of Heroes of Legionwood downplays the choices and consequences somewhat. The consequences of a choice you make in Act 1 probably won't fully manifest until Act 2, for example - which kind of dulls the impact of the choice as you won't get to see it until a later episode. I'm trying to find ways to give major choices more immediate consequences as well as long term ones, to try and address this.

The main purpose of the game is to establish the events leading up to the conflict in Heroes of Legionwood.

01/27/2015 09:40 AM
No, of course not. I'm using a lot of placeholder graphics out of the RTP and other generic stuff until my commissioned stuff is ready.

I'm intending for there to be a lighting effect in this area, but not this one obviously (which isn't available for commercial use anyway iirc).