Close
Working on too many things at once. Have a game in the works, learning keyboard/piano, dealing with health problems/winter, and watching youtube. 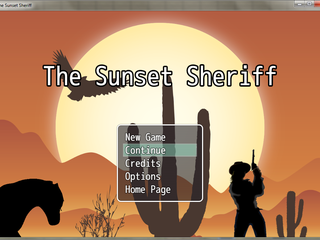 The Adventures of Sheriff Libby

JustAShyDoge - The Game With No Name
Show

The exit behind Dad is bugged. I suspect there's a Move Route that cannot be completed, and the Move-Route isn't skipped if it can't be completed.

I appreciate the equipment descriptions.

The mine-carts of the Mine of Knowledge are a little awkward! You can techincally be land-locked with the transition between the first and second screen. With the last puzzle, it doesn't seem like it's following the route it should? Like, it went straight out to the blue chest in the upper-left corner when the rail was curved to the left? Sorry I don't have footage of this.

Now we also know what happened to Edam! He bacame Gruyere! Though, yeah, now that I think of it, their personalities from the beggining versus thier personalities later on didn't quite match.

Well, I'm not so sure if there is a "cure" for Guryere/Edam either. Still, it's a good note to end the game on!

I legit dread the fishing mini-game. Supposing this game ever gets to see an expansion.

I'm not exactly sure what the benefit of Empowering a "V Cut" is. Well, okay. Let's run some numbers. With no empowering, it deals around 150 damage. Empower 3 was doing somewhere around 240. Which, okay, is an improvement. However, an Empower 5 is also around 240 damage. So there might not be a benefit to empowering beyond 1? I'd have to do more testing to verify this suspicion.

Sill, I can't help but to give credit for the educational build that's going on here. Though, I'm somewhat partial to "Calcumancer" over "Mathmegician". Might be Final Fantasy Tactics talking, though.

What's with the speed of this character? I had to double-check that "Always Run" was enabled (it was), yet it feels like you're going at a snail's pace. Even with it off, the "regular" walk speed isn't actually that much slower than running. Unless dash is disabled for god-knows-why.

I swear, it will take a literal day to get to town with this walk-speed. Assuming the game even gets that far!

Okay, it's a little faster now. Weird. I'm not sure I like it. The "regular" walk speed is still slow as hell.

Wha? The weather changed? What is this house? Am I back home already? And why is my speed back to a crawl!?

WHA? I went back outside, and it's winder wonderland again? This makes zero sense whatsoever.

Re-loaded my game in case I missed something. I did. The house and the weather-changing was a flashback. It could be better communicated that this was, in fact, a flashback, though.

After the scene with Lazer Wolf, my speed gets cut again. Why? Why do this? To pad the game-length?

The walk-speed makes this a difficult game for me to want to play. I don't mind the story, but this walk-speed is killing me. I think I might understand the underlying concept of why the character might walk this slow. He's subject to harsh weather, and trying to conserve energy. Still, that doesn't make it any fun.

Though, I kinda wonder how the hell this game works with just event-commands? When I did it in Okiku, I used a hybrid approach of scripts and event-commands. Well, it was easier to do it that way. Detection of events colliding with each other is probably possible with event-commands. Probably a lot more work under-the-hood too.

The Elevator was pretty funny, not gonna lie.

My final score was, like, 20K, or some-such! I initially bought 2 Med-Kits, then I bought, like, 11 more at some point. I probably only used 5, though.


With this, I'm willing to say that my top five picks for this event would be Puddor's Fragments, seacliff217's Attack of the RTP, pianotm's Tomorrow's Child, JustAShyDoge's The Game With No Name, and Beregon's Luke Daimont: Absoulte Mayhem. I like each of those games for different reasons, so, it might be tough to narrow it down to which one I like best. While it would behoove me to vote for my own entry, I must be honest, and say that it's an okay entry. Maybe not spectacular when compared to those games, but, at least okay.

As an additional aside, Battle4 was all over these entries. It's is a pretty cool combat theme, so, I can't really fault people for that. Also, and I dunno if this is because of Fragments, but, like, I can't hear Dungeon2 and not think "Status Screen". As for Theme4 seeming to be the Title Screen theme of choice, I mean, I'm as guilty as the next person, so, *shrug*.

It's not quite balanced yet, was gonna make Empower more powerful, each one giving a whole a.atk bonus, but halved it for the thing. With more time, and a more robust question difficulty system in place, I think I could make the Empower portion more balanced.

09/30/2020 12:28 AM
Ah yep Coel, I had almost no time to work on gam, it was made in like 2 days, first quarter of college, ie so much to get done besides the three courses. I prolly should have added a 'using a calculator should help' hint in the game. The number of elements, mixed elements, etc in the equations would get harder the higher level the player or after certain points in the game, but ye ran out of time for that too. Also had to Math.abs() the negative numbers so that I wouldn't need to do funky things with the number input. (it really needs negative symbol/numbers, but that'd take a plugin or script editing)

09/27/2020 10:09 AM
Uploaded, it's much shorter than I wanted, reaaaally haven't had time since I just started college. But managed to clear enough stuff to work on it a bit for a couple days. >.> Might finish it in future though. *with plugins because holy crap, without some quality of life stuff, making more complex things suuucks.*

v1.1-
Fixed a big oversight that was caused by using some plugins that were turned on in test game. Equips() check should work properly now.

Also thanks to Pudding(ShyDoge) for letting me know what the problem was.

06/01/2020 12:51 PM
I wanted to use Mirak's background image more, but I couldn't finish up to the point I was planning on using it, so used it for an effect...that I didn't have time to get the positioning quite right. >.> I will add it in to the point I was originally tho when I finish up SS2 and mak a gamepage.