05/05/2018 05:51 PM
Thank you for the feedback. I'll see about fixing that blue text this week sometime. I noticed it too, but just hadn't been able to get around to it (darn that real life, interrupting game time!)

Unfortunately, I didn't have time to clean up the game outside of the start area for the "Release Something" event. The starting area was confined to an island that is fairly deep in the human territory, and their country is the only one with a full standing army - somewhat shielded from the trouble in the rest of the world. In fact, most of the conflict is between the two "beast" nations.

Of course the game world here is going to be nonsensical, the lack of males isn't even a plausible problem. Given that the human country is the only group with a standing army, the beast-people would likely be wiped out given our own, very real, history. Polygamy will be seen, and in particular in the non-aggressive "beast" / "demi-human" nation. It is not, however, front-and-center to the story itself.

With all that said, I think using the slightly better payment and having some human females in the "bad guy's" area are solid ideas, and I would have no issues making some adjustments to make it seem less broken. Thanks for the feedback, you gave me something to think about going forward!

I tried to keep a strict limit on how much I put in the demo, so I could get at least *some* quality control on what was released. Some bugs still got through... Every bug that gets pointed out is a bug that can be removed.

The chickens thing is, however, on purpose, as there is a boss chicken that doesn't like the protagonist kicking those innocent chickens! (Boring Math: Boss Chicken Stats = Base Stats + (number of chickens kicked) x (stat adjustment), and Boss Chicken XP = Base Number + (number of chickens kicked) x (XP adjustment).) I should probably do that with the rewarded coin as well, huh?

For great justice, added a new screenshot, the party vs. King Fergus, the Chicken! :) 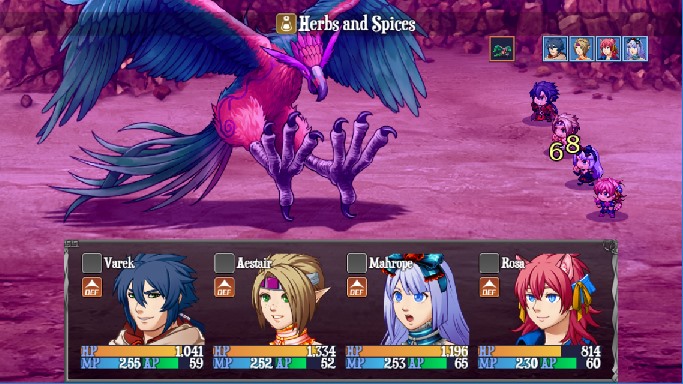 (edited to change square brackets to parentheses, oops the green behind my ears is showing.)

03/31/2018 02:50 AM
I actually didn't know about a bug with Windows 7. I think I have a computer around here with Win7 on it, so I'll see if I can't figure out what it is before any full scale release. Hopefully, it'll be something I can track down and take care of.

Thank you for the props, I'm working on it a little every week. I hope to put up a new blog entry up this weekend. I believe it was someone on RMN (or RMW) that said, "what's nice is that if you get stuck on part of your game, you can always draw a map, or other small thing that will help your game along."

Again, it was great to have a dual-site supported event. Really neat stuff. Thanks to the staff of both sites!!!

03/09/2018 06:53 PM
Thanks for the points seacliff. I believe sumrndm pointed the font out in one of his tutorials. Even after looking for something different, I found little that just worked as well as Duality font. Some looked as good, but were missing lower case letters, numbers, or had bad spacing. Duality just seemed to have all the little details covered, as well as having a lot of "character."

I don't know all of the available facesets yet, still nubby here, but I do like the art style of that avatar too.

03/08/2018 06:21 AM
I just finished doing a mapping demo and put that on the RMW site for the birthday event and a regular demo here. Of course, I can't leave well enough alone, so I polished the maps in both. Separately. Now, I'm back-porting those changes back into the game itself.

While I don't think I will do it the way I did the demo next time, I will say it was really neat to see the differences side-by-side. Some of the changes were as simple as where I drew in some extra shadows vs. the map without the extra shadows. The old saying must be especially true for RPGMaker, the devil is in the details.
Pages: first 12 next last