Close
I'm a tree. In the summer time I grow leaves and during the winter time I become covered in snow. 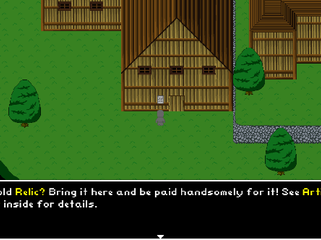 A Quest Based Open World RPG.

I'm also not sure what you mean when you talk about shortcomings. If you mean the lack of story, that was a deliberate design choice. I don't like story heavy games. The games I'm inspired by also either have no story or their story is very light(ex: Dark Souls, Pokemon, Oblivion, Monster Hunter) so that's more along the lines of what this game is aiming for. By the end of it I'd like it to feel very meta and competitive.

I'm making the best game I can and always open to ways of improving it. A game with ideally infinite replayability. It's inspired a lot by the Souls games and also by Monster Hunter, Oblivion and even Pokemon. It's ideally going to be about exploring, doing quests, crafting gear and managing your build where there is no single best piece of equipment. They'll all have different bonuses that contribute to different playstyles. That's my goal. I like the competitive nature of Pokemon battles and hope players find the choices difficult to make. Strength build? Dex build? HP build? Build your character around certain bonuses? Lots of choice.

It's been in development for over a year and will probably take another few. I'm in this for the long haul so no worries about that.

08/01/2018 04:58 PM
Thanks for the review. Strandent is now at v0.4 and new updates are released on the 1st of each month so a lot of things will be changing up until it's complete. There is a long ways to go. In the latest update I changed how classes work. They are now tied to weapons and you can change classes at a Well as well as manage upgrades. You also upgrade your stats now in a menu.

Weapons also deal damage based on Weapon Scaling. Each weapon scales with your Strength and Dexterity with a letter rating. I've also added 50+ pieces of equipment. Since I've done these things though it messed up a lot of events so the island won't be available in the current build. Instead I changed the intro so there will be a story and you start off in prison.

I'm sorry about the music. I'll try to improve it as the game move further along. I'm doing my own music and art. I've been upgrading the art as I'm going along and there is some color added to the game. Once the game is finished it should have full color.

I'll also try in the future to add action sequences and hopefully that will speed up the combat some. I'm always open to suggestions. Thanks for playing!

You now have a total of 18 abilities to choose from depending which gear you start the game with.

You can only use 4 abilities at a time though so experiment and try to come up with the best build!

Strandent v0.4
Added over 50 pieces of equipment
Damage now scales based of the users Strength and Dexterity
Added a letter rating for weapon scaling
Added Equipment Requirements
Removed starting Classes and changed how Classes work
There are now 6 Stats to increase in the menu
Started adding color to the game
Added Chain system for item drops
Other minor changes

Going forward I'll remove all but the most recent update so it doesn't take up too much space. I'll post the changelogs down here though so previous updates can still be read.
Pages: 1