Check out my passion project, NIHILO,
a throwback to the 90s Post Apocalyptic/Cyberpunk era. 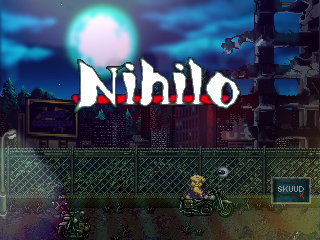 author=TheRpgmakerAddict
Cool, worthwile welcomed upgrades! I was waiting for these additions, I'll check it, two thumbs up!


Ayyyyye! I hope these changes make things a bit more manageable! If you give it another whack, I'd greatly appreciate the report of any bugs found! I gave it a quick run-through, and everything went okay, but I haven't given it a thorough walk-through!
Appreciate your support of this project!

author=KoopaKush
Wooo, let's go! Glad to see the extra polish being layed on, such a good feeling :D keep it up bro, I'm going to stream the whole rest of the demo soon!


Hell yeah, my man!
I wanted to add the key changes and gameplay options for players the be comfortable!
Can't wait to see you finish it, braw!

The exp handler and buff/statfx showing in battle after victory is a tough one. I've wracked my brain on trying to get rid of these, but it all comes down to 2k3's engine it unfortunately seems.
Thinking of maybe reaching out to some of the kind DYN plugin community on this one for help, so there may be hope yet, haha!

Currently working on the pacing in battle, there is a lag during turns in battle due to the time it takes to process some of the extra plugin coding and what-not. To make up for this, I decided to make battles a little more drawn out, but plan to have less battles that are more rewarding (skip the grind).

Tutorials are a pain in the game, I know. I'm still searching for a way to implement much smaller tutorials at a time, so you're not loaded with too much information at a time.

I'd love to see the stream! Is it still up, and of so, could you provide a link?

Thanks again for the feedback, it means a lot!

author=LolloRocketDiver
Ok I finished the demo! This is probably the most promising 2k3 demo I've ever played in my life. The aesthetic is great, the atmosphere and the animations are insane! I'm not a huge fan of the portraits behind the message box, though, but overall you did a wonderful job!

Yo! Thank you for the kind words and feedback, that really means a lot to me! I feel very privileged to have you have tried my demo!
Portraits behind the message box has been fixed along with many other things that needed revised!

There are two bars in the fortitude gauge to display a balance. If you max out the fortitude gauge (green bar fills/red side empties) you get a limit break. If your fortitude depletes (red bar fills/green side empties) your defence gets halved and that character will take more damage. Kind of a punishment for letting it dip, instead of just rewarding the character with limit breaks.
I could've easily conveyed that with just one bar, but I honestly figured it was better demonstrated through a balance gauge with two bars.
I could probably word the tutorial better! I'm not the best when it comes to explanations and dialogue, hence why I'm looking for a new writer, haha!

I could definitely go add the number of materials held in the crafting menu! That's a great idea! I'll add that to my list of fixes/improvements!

It definitely is early on in the story, and it will build as the game goes on, but as for the plot concern!
Show
My reason behind the capture of Nikolai was to convey that the outside world is filled with very unsavory characters such as bandits and people who will do anything including murdering innocent people for their things. I wanted to convey that there is little trust for people outside of people's cliques. Also, it was a good chance to introduce the strange powers and abilities the calamity has bestowed on people early on in the game. Such as Ragus' "Second skin" ability. The fact that he can mimic people's appearances and such.

author=Ashes of Emerald
Thanks so much for the includes, Gizzy! Appreciate it <3

You know it, home boy! Can't fucking wait much longer for some ODH!

Hopefully will be out tomorrow (Saturday April 17th) ... *Fingers crossed*

author=Megollyen
This really looks incredible. The fog effect, the lighting, the detailed environment. I freaking love it!