Close
I'm a very big fan of music of japanese role playing games for it has influenced me throughout my life since my early childhood. The day I saw Nobuo on the stage in front of me I decided I too will become a composer one day. It has been 9 years since that day.

You can't find my works anywhere right now, but that will change very soon this year as I will be contributing several original tracks for RMN Music Pack 2.

05/23/2019 11:34 AM
For some of us with higher resolution, the website background image doesn't display correctly:

I spent a while editing the image to at least a bit higher resolution by continuing the pattern: https://rpgmaker.net/media/content/users/1005/locker/rmnbg_extend.jpg

The end result should solve this ugliness: https://rpgmaker.net/media/content/users/1005/locker/fixeded.png

If you agree with the results, could someone go ahead and replace the old image! Thanks!

Here's some of my experiences:

Went out for the first time to only solely play Pókemon Go. Headed out to West, to a high hill top with a school building. I was amazed how cool looking place this was and thought if I ever got kids it'd be cool to have them go there. I didn't realize to take pics at this point yet.

There was also a guy sunbathing at the school yard and I felt slightly troubled to wander around him searching for Pokémon.

I was searching for Meowth at the school track field but gave up. Headed for a Weedle on a narrow side path behind the school and discovered some really cool steep old stone stairs. Didn't realize to take picture. Found a Parasect and a bomb shelter at the bottom of them.

Was wandering around a good while trying to locate a Psyduck on my tracking. Found a Staryou on a fountain where there was also one of the local gyms. I took good beating at the gym for still being unfamiliar with the mechanics. I also saw some chicks in the park enjoying the sun. Mostly Pidgeys.

Headed out home and found myself coming across a construction yard fence with a warning sign on it. Found out I was on the wrong side of it, in the construction area. I was there after a Koffing and didn't notice I had walked there. Climbed over and continued. Found Hypno near super market and young couple was also rejoicing that there was a Hypno nearby. I showed them the direction and asked if they had seen the Psyduck I had tried to locate. Battery died, went home.


Second journey same day: Went to a park behind the nearby hospital. GPS couldn't locate me. When it started working I finally found that Psyduck there, though. 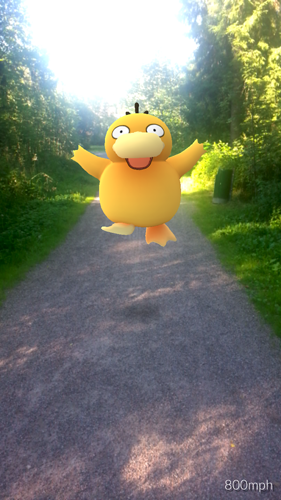 So he jumped when I took the photo.
Ended to a really quiet neighborhood with very few pokémons. Discovered there were a few Eevees there, and a Nidoran ♂ near the side of the forest. 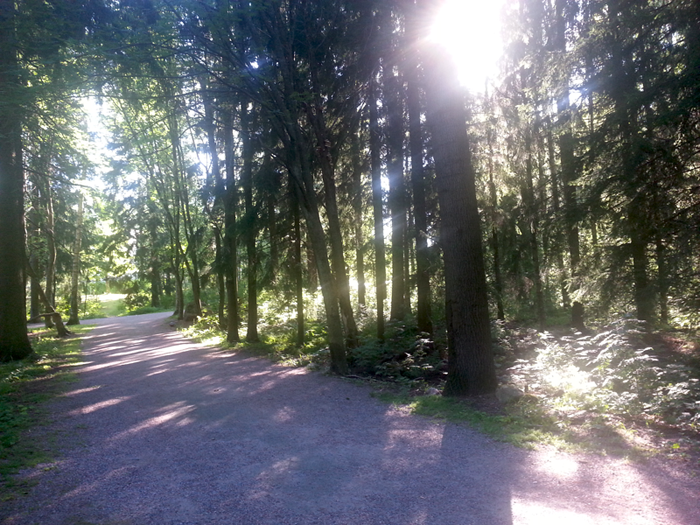 I think the Nidoran ♂ was somewhere around here. 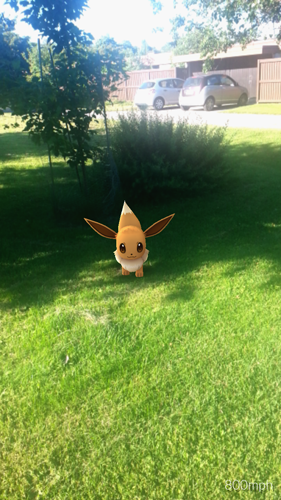 Eevee in a quiet neighborhood.
Set my aims to Pokestop called "Artsy Trashcan" and a "Good Shepherd's Church" gym. 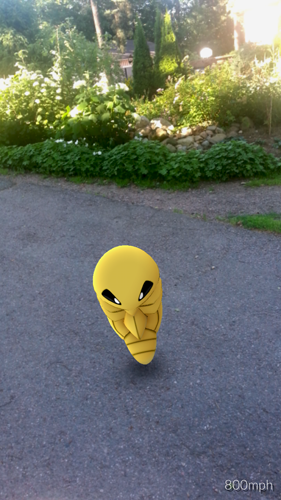 Kakuna from along the way. 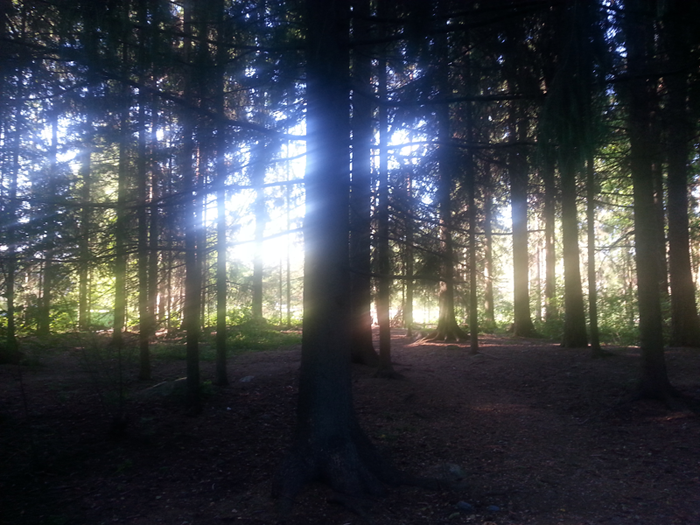 Some pretty scenery from along the way.
GPS died when I got there. Set out to further Gym at playground way ahead.

Ran to three kids on bikes who asked if I was playing Go too. Chatted a bit about the game and one of them told he got over 500 Cp Scyther because he had a 10 km egg. Egg and "dick" share the same word in finnish, so after he spoke it out loud and we realized the subcontext we had a chuckle. 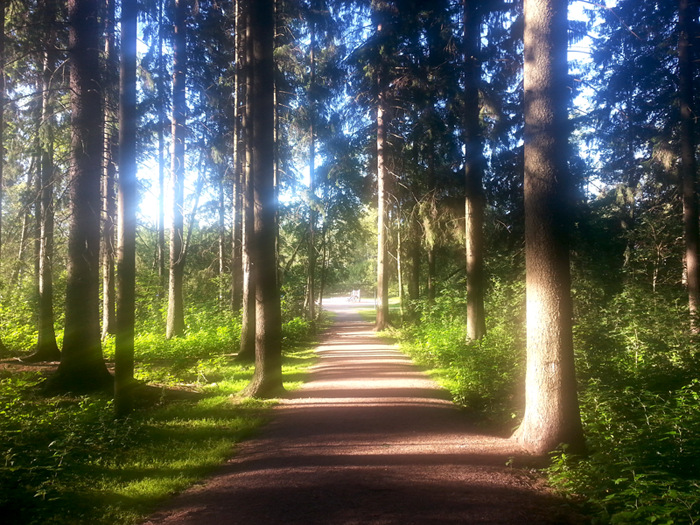 Was arriving to the playground. It was a cool atmosphere there. 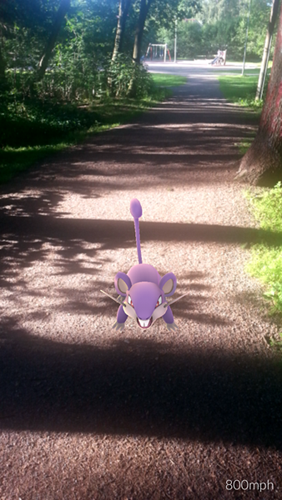 Met this little guy also.
Battery died. Damn I need a new battery. I found myself at a familiar and melancholic area. It was the Ex-Zone. Headed home. Walked ½ hours without Go. :(

Last journey of the day. It was past 11 PM. Went towards South-East and came across several young guys wandering around the streets with their phones. When I stopped near a local gym belonging to team Mystic, which I am also part of, a guy who walked past me gave me a smug smile and nodded his head. I greeted him in response with a nod but couldn't keep my pokerface like he did.

Caught a pokémon near the gym and set my Raticate to guard there. A dad with his daughter greeted me and I was thinking they'd be commenting something about the game, when instead the father asked me to tell her daughter that man has visited the moon and he isn't lying to her about it. I answered "probably."

Went to a trail that was near to from where I walk to work and where I had seen Ghastly earlier. Ended to an open field and found a Magikarp in the trench. 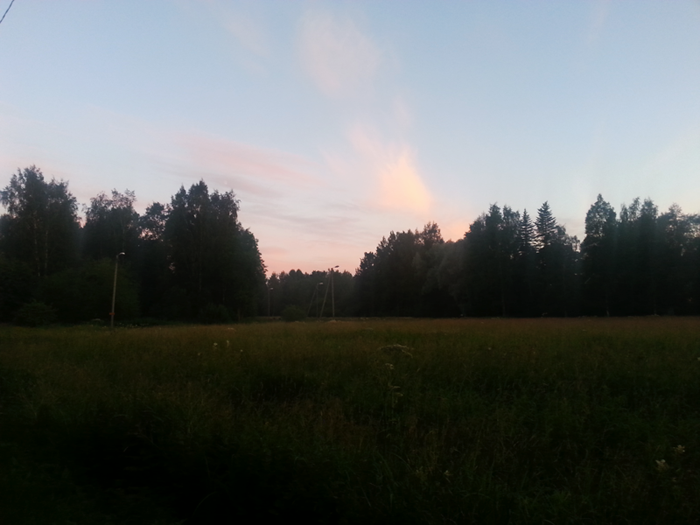 This was better than the picture with Magikarp on it. D:
Tracking noted me of a nearby Golduck, but my GPS kept dying so I couldn't search properly.

Went to south to quieter neighborhood with very low activity until I tracked Squirtle and Gastly.

Wandered around searching for them around the houses and it was almost 12 am. I came to a dark and really steep downhill road covered entirely by tree canopy. It was surprisingly steep, really! 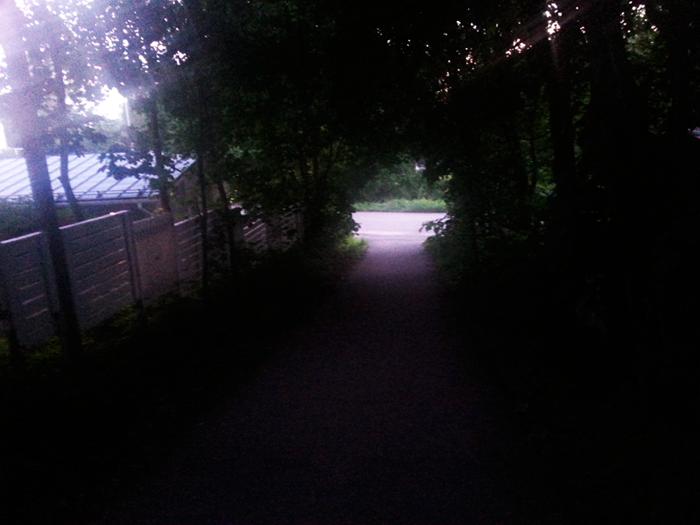 It was a surprisingly steep road! Picture may not convey it. But it was somehow cool moment still. D:
Squirtle and Gastly were there! As well as Rhyhorn! Felt like a really rewarding end for the day. Soon after, the battery died. 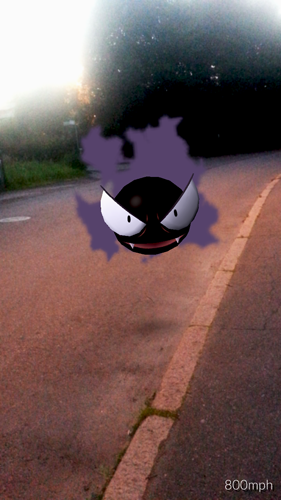 Gastly near the forest road in the finnish midnight.
Next up... buying a battery pack.

05/14/2016 06:00 PM
Hey! Welcome to RMN XCOM 2 let's play! The idea is to play XCOM 2 with members of RMN being the brave citizens of earth, joining the XCOM force in order to stand up against their alien overlords! We're playing with an Ironman setting, meaning dead soldiers stay dead!

The idea is to have a new episode up in a weekly manner! If you haven't been included in the game cast yet, but would like to, let me know! Be sure to include your nationality and ethnicity for accurate representation! You can also write a biography of your character and why he has joined the XCOM if you want. (It shows up in the recruitment screen.)

You can also include some additional wishes for your character's looks too. I may even listen to some of them!

Here's our first episode: The First Casualty & A Rogue Grenade:

Maybe even on an Ironman difficulty and it'd be fun to see users die off, with there being no chance to reload the game from prior state.

I am looking to have some variety in some of the coming announcements, so any voice types are welcome! You should have a good microphone capable of recording clear quality audio with no notable background noise or other audio artifacts.

The commissions will generally be short, ranging from 15 seconds to 1 minute.
I'm not expecting a great tonal range, or range of expressions, but it would be good if you had a good control over your voice and manner of speech.

If you're interested, send me a PM, or email to musicpack@rpgmaker.net
Include a sample of your work eg. an example announcement consisting of couple of sentences.

Professionals should include their price quote.

For reference of quality I am expecting, and the type of instance your voice will be used at, see: https://soundcloud.com/rpgmakernet

Rpgmaker.net deviantart group is up!

What musical genre? What instruments? Or what feelings do you think it should even express to begin with? (Other than anger, drama and frustration)

Feel free to include references!

Hearthstone players unite! (... I know that at least Mawk plays...)

Does anyone here play in the EU bracket? What class do you prefer? What are you going to play in Whispers of the Old Gods?

I was just playing arena and a hunter had lethal on me. I had almost conceded on my previous turn, but I just decided to wait him to kill me instead. Well, instead he plays a discover minion and passes the turn, and I get to kill him...? Is it possible he miss clicked the pass turn button after discover? But oh man...

I'm not sure how healthy it is to have stuff like that around here, though I don't know how much you can control the ads displayed on the site.
Pages: first 12345678 next last