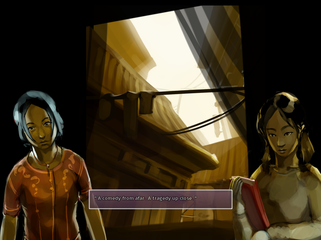 A game of strategic sophistry. Convince or crush the teenage girl who wants to end your reign of evil.

10/03/2021 03:23 AM
It's alive and it's so good!! Merlandese, you do not disappoint. Did my first playthrough in one sitting a few weeks back, in defiance of sleep and good sense. Will play again whenever the opportunity arises!

(also, while on the topic of gratulating, 1. Lure is currently the most played boardgame in my household, and 2. Prisha's lines were priceless)

Thanks a bunch for letting me know about the podcast, that was really super interesting. I am now thrice as intrigued! (as a random thought, the discussion reminded me of Mircea Eliade; I recommend his novels, e.g. Forbidden Forest, which often feature a strange mix of love, dopplegangers, and mysteries that really feel like there is a solution vibrating below the surface, but not a puzzle-like solution)

As for me, I'm not really around so just ignore me :P (I just happened to wander the internets onto this site on a whim and saw a cool buzzing game, but my gam mak days are still in an extended coma)

And my, blueperiod is also still here and active, which makes me very happy.

All Quiet on the Western Blog

02/06/2018 11:26 PM
I'm very much into the idea of not being the hero (insert quick prayer for similarly-named long-agonizing project), and really want to see what you'll do with it. Obviously scope creep is something to be wary of, but the real bottom line is: have fun and do share such cool news from time to time ;)

This is just awful.

11/15/2017 12:52 AM
Normally, this level of raging against God is when your father-turned-nemesis oozes out of the shadows asking "Dost thou seek power?", then grants you the Omegablade thus prompting your final battle against True Seraph Thousand-Eye Metatron, while Gregorian choirs harmonize over a second hand Japanese-to-Aramaic mistranslation of Bohemian Rhapsody.

On the other hand, I feel that, by continuing this project, you're kinda wrestling God into making more and more awesome things happen in your life in hope of forcing you to give up, since clearly bad things are just not cutting it anymore. So congrats on being tough enough that your increasingly desperate local demiurge must inflict upon you a boyfriend, first-class job, presidential career and unexpected inheritance of a fully staffed manor in the Bahamas.

Also, it is crucial to have something in your hands before you start improving on that thing, so even if you're surely aware of it, I'd like to say: beware the trap of remaking the beginning of your game so many times that it never gets an ending. The final version of the game's beginning is probably something you'll craft at the very end of development, as hooking people from the start is the hardest part and requires full knowledge of what's coming after.

I haven't seen the criticisms on reddit, but while all constructive and valid criticism is good (even if hard to withstand sometimes), not all valid criticism is actually going to push you towards making your game. So I recommend being very careful in teasing apart the improvements that would lead to a better version of Omnis, and those that would lead to a different game altogether (or an unfinishable one).

I trust your vision, and hope that you'll recover from the blows to your motivation!

Any feedback for our game?

This is very impressive work and it's an utter shame that you haven't been getting more feedback (and I say that despite not being fond of horror at all, but I've grown used to the issue of great games in a genre I don't like with Gibmaker).

I'll write a review one of these days, because there's a lot of good things to say, but for now I'll focus on a few very concrete things.

Two suggestions:
- make transitions faster (e.g. between rooms, between menu screens), the game controls already feels a bit sluggish in some ways, and that's not helped by having to wait for a few seconds every time you go through a door.
- don't shift the camera as soon as you turn around, that made me super dizzy all the time; see Super Mario for reference, when you turn around the camera will stay put until you walk a couple of steps in the new direction.

Sidenote: I spent quite a lot of time backtracking at the start to figure out where I had dropped random objects because I kept finding more stuff to pick up and wasn't lucky with those I chose to grab first (I got the wire last). It was a bit grating to have to walk around at a fairly slow pace just to try and retrieve random objects. It got better afterward. Not sure if there's a way to deal with that, but I'd suggest perhaps not giving access to the whole research area (and therefore to tons of objects to carry) before the first few become useful. On the other hand, implementing that might require one more key, and there are enough of those.