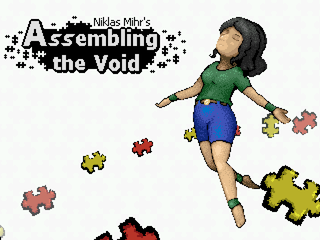 Collecting and Completing in Video Games

some of you might know but most don't: I'm writing my diploma thesis about the topics RPG-Maker, Video Games and Video Game Music in conjunticon with a practical work (my project Assembling the Void).

Right now I try to find a more in-depth approach and hit the topic complex "Growth/Collecting/Completing", mostly referring to Video Games but also to the cultural phenomenon of collecting (stamps, Star Wars action figures, whatever).

I'd like to share my thoughts with you and I am looking forward to your reaction, assumptions and input, because this topic might address everyone reading this as all of us are artists in some way or the other and I guess everyone of us knows a bit about Video Games.

Please excuse my non-native English as I am German and try to translate my thoughts as good as possible. :)

Half a year ago, right before the launch of Diablo 3, the developer Blizzard announced, that all (randomly selected) participants of the Diablo 3 Beta would gain a special Feat of Strength (some kind of special Achievement that does not award Achievement Points) and exclusive Banner that could not be obtained any other way - non-beta-testers would never ever get the chance to add these special items to their collection of ingame-rewards. Even though both banner and Feat of Strength wouldn't influence the gameplay (like giving any kind of advantage of owners over not-owners), Blizzard's discussion raised an immense uproar spread across the fan community (well across the people that had been turned down by the random generated beta accesses in the prior months). They felt betrayed and separated in first and second class users.

What happened to these people? They got pissed off, just because of some bits and bytes?
Well, the developer they admired, took away the possibility to "completely complete" the game right before launch. No matter what they did, how far they progressed, how many levels they gained- they would never get this little special bonus.

Most RPGs (and other RPG-insert-any-other-genre-here-hybrids like Borderlands or even Casual Games) are together with implementations of story telling and fictional worlds based on the ability of character development, increase of levels and items in possession or to say it short: growth, growth, growth! This is so essential for RPGs that it has to be mentioned in any RPG-Genre-definition.

You can compare the phenomenon of collection to collecting issues in the real world. I distinguish between Indefinite Collecting (in cases of no precise target but let the collecting grow and grow. Examples would be collecting of dices, wooden animals, little fairy dolls) and Definite Collecting (collecting for a precise aim, like completing the Pokédex or a certain series of post stamps).

I will introduce you to some video (and computer) games that deal immensely with collecting issues or break the rule of usual genre habits.

1) First encounter of collecting might be old Arcade Machines that kept track of high scores. During a game session the players had been able to keep track of their progress and would be able to compare their achievements with other players. Interestingly enough, one of these games, Pac Man set the goal to collect all pills in order to advance to the next level.

2) Pokémon deals perfectly with every aspect of collecting. Collecting badges and HM to progress in the story, complete the Pokédex (Defined Collecting) and collect as many Pokémon of species that you like, you prefer to train or you want to use in battles due to their power. The latest installment, Pokémon Black 2 and White2 , introduces a complex achievement system.

3) Zelda: Mayorah's Mask breaks the rule, because it lets the player collect items and some story progressions but let's the player lose much of their progress in certain intervals.

4) All the Zelda games address the issue of collecting. Even though Link does not gain levels like in usual RPGs, his bar of Health Containers will grow (some of them are optional) and in every Zelda Game there is something to collect in order to advance in the story line. Mostly the tools and weapons that help you deal with the puzzles and the environment, but also key Items that will lead you the way to the games final (like the Music Instruments in Link's Awakening). The Zelda series is one of the few that allows the player to backtrack even right before the end of the game to most of the prior explored areas to discover missed extras. As much as I know there are no missable items (like you find them a lot in FF VII)

5) GTA games share a game progression bar in percent. In order to gain the 100% there have to be solved not only the main story line, but also different side mission and collection of different things (secret packages in GTA III) that will unlock eventually special extras like better vehicles or weapons.

6) The Xbox introduced the first game comprehensive achievement system. Players would not only observe their progress in a single game product they afford but also the overall achievement progress of all their games combined.

7) Battle.net and other MMORPGs save their progress permanently in the Cloud. Digital possessions and collections are no longer based on a certain player possessed hardware machine, but can be accessed from any continent of the world.


And now let's get back to the RPG Maker: can the development of a game be compared to the aforementioned "collecting"? We collect sprites, graphics, sounds, etc. to complete our game and see how it grows? We create worlds, give them inhabitants, characters, dungeons with monsters, towns with buildings. Just to hope to see it "completed" and share it with other people to make us feel satisfied?
Maybe this applies to every kind of the fine arts: composition comes from Latin "componere" which means: to put together. Artists assemble their pieces of art to create something that might last for eternity (or hopefully a long time).

No it gets philosophical:
Why do we try to keep things? We all know that we die some day. From an atheist's point of view we know that we can't lose all our possessions at the latest from the moment that we die. And even modern world religions don't preach that possessions can be transferred to the afterlife.

This leads me to my questions (and I hope this leads to a passionate and diverse discussion):

- Which games do you know, that break with the typical game rules of collecting and completing? Do you know games with some irony regarding collecting?
- Why do you think, do people collect items in general? You can give concrete or more philosophical/psychological answers.
- Do you see connections between collecting in games and hoarding? (Check this funny video: http://www.collegehumor.com/video/6747386/skyrim-hoarders)
- Is collecting an integral part of contemporary video game design? Remember that the first video games (prior to high scores and save slots) did not possess any form of keeping track of progress.
- Do you like achievement systems or do you think that achievements have become way to popular nowadays?
- Do you think that the acquisition of soft skills in real life (like learning instruments languages or traveling to different countries) can be compared to collecting of physical items or level progression in RPGs?

I hope that this topic interests you as much as it interests myself.