Close
Hi! My name is Jaiden and I'm currently making a game called Legends of Astravia!

You can find me on Discord, too. Join the official Legends of Astravia server here: https://discord.gg/astravia 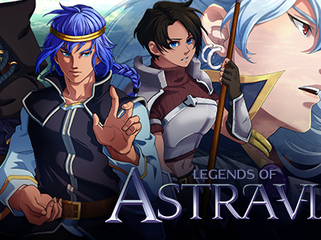 Mend a divided world before the Cataclysm brings forth another age of ruin.

author=OzzyTheOne
That's a darn good lookin' map you got there!

author=NoBody13
Yessirr it's here~~ congrats! I'll play this as soon as I get some free time. Glad you made it this far :)


Thank you so much! Hope you enjoy :D

author=JosephSeraph
ok i just realized one thing and now i have to ask HOW DID YOU MAKE RPG MAKER XP FEEL SO FRESH AND MODERN AND RESPONSIVE AND CLICKY
i REALLY thought it was MV like omg
no compatibility issues, no weird lags and hangups, no RGSS crashes or whining, nothing. Just pure unbothered bliss. I'm shocked


Golly thanks! Well, the secret sauce to making XP buttery smooth & MacOS compatible was mkxp (same sauce that To The Moon & other Freebird games used).
As for the lack of RGSS crashes, hopefully that's just because I've gotten good enough at writing Ruby code!

author=Make_it_MagiK
YES IT'S HEREEE! CONGRAAAATS!! Can't wait to finally play it!
I think I never left a comment on your page, but yeah, I was always following your progress and couldn't wait to play the demo :)


Hey, awesome! Glad to hear you're excited about it. I hope it lives up to your expectations :D

author=Darken
I don't understand, can't you just use the left side for shift space? I also forgot shift was a thing and only used space most of the time btw.

I got halfway through typing up an explanation and realized if I swapped WASD and the arrow keys for battle input / navigation, you could still use shift/space as I mentioned. Disregard! That makes sense, and I'm actually more curious to give it a try now.

FWIW, my philosophy with the battle "Default" controls is almost 1:1 with how Super Mario RPG handled it. "AB Style" feels weird, and was an afterthought for folks who said they hated the default scheme. It needs a little more TLC, and getting input from folks like you actually playing it helps a ton, since I'm pretty numb to it.

author=Darken
Yeah the way I interpeted itChild of Light has an interesting philosphy in that vein worth checking out.

Ah ha, very interesting! I will check out Child of Light and see how it handles it.

author=Darken
Were there any interrupt mechanics in the demo? Surprised not to see it since Grandia 3 went really hard on that aspect.

I didn't get a chance to touch on it as much as I'd like to. It's a little unexplained, but electric-type attacks in the demo do "stun", which knocks a character back on the bar. I plan to do some more interesting action cancelling and the like and be true to Grandia, though. Head full, days too short.

I haven't played Child of Light, but someone else mentioned it in the past. I'll have to check it out, especially based on your suggestions.

Solid, I love detailed feedback like this. I appreciate you taking the time to play through & write this all out!

Just some responses:
- You're not the first person to get tripped up on the controller-already-plugged-in-showing-wrong-prompts thing and I have a note to address it. The prompts do appropriately update when you unplug a controller, but I guess asking makes way more sense!
- Holding was my (clearly needs a bit more work) idea to make a "Defend" command that actually felt useful. The idea was a beefed up defense and recovery at the cost of no advancement on the bar, i.e., similar to how you lose a turn to defend in a turn-based system.
- The essence tutorial thing is a known bug and on the to-do. It drives me absolutely crazy, sorry you ran into it!
- The arrow key suggestion is interesting, I'll play around with it. I had thought about it prior, but the biggest issue with this is you lose the thumb/pinky shift/space configuration for time modulation, and I'm not sure how that'd feel with arrow keys.
- I really like the detailed feedback you gave on holding, and I'll give it some more thought, too. Interesting to hear how you tried to optimize it in the boss battle.
- I don't explain swapping characters nearly well enough. It's much more intuitive on a controller (bumpers), and a little goofy on keyboard (Q/E). Even then, there's some weird logic with the order of how a character is deemed "active" or not that also desperately needs addressing.
- The button prompts updating for a playstation or generic controller is on the to-do as well, mostly a scope / time situation.

Edit: OH GOSH HELLO, I've actually been super interested in Machine that Breathes for a while! Thanks, it means a lot! I actually was looking to do the same soon, your game looks amazing~!
Pages: first 12345 next last