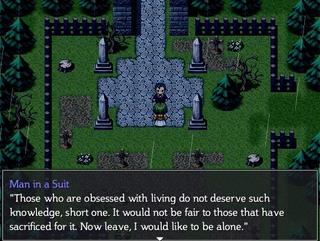 Who are you to stop the apotheosis of a madman?

craze made me do it

Weird how well the farm-themed IGMC icon pack on RMWeb fits my project. We needed whips, pistols, and herbs... coolio

06/18/2017 09:59 PM
As the guy who wrote 95% of the text in the game(and did the drawings of the girls that craze plastered those amazing mspaint expressions over), I'm glad some people enjoyed it(uh, hopefully)!

For the curious, the script for this game actually goes on for a fair ways longer than where we ended and is in fact finished. We didn't start working until about two days into the contest, as we were a bit wishy-washy at first, which was probably our undoing. It ideally would have had color portraits with actual expressions, two more dungeon and an actual resolution to the developer's story.

We do intend to finish it for real when Craze comes back from his summer job thing, which will unfortunately be awhile but what're ya going to do. I had thought of doing it by myself but... *shrug*

Bonus unfinished drawing that we were gonna plop at the ending of the game, of them outside of the game enjoying the pizza that never actually arrived during the current available version: /vanishes into the aether

i haven't read the rest of this topic and i don't plan it as i have long since lost interest in talking about politics with people on the internet, but never forget to have a sense of humor, guys. a little bit of levity goes a long fucking way.

i'll go back to hiding in my corner and contributing nothing to the world, bye now.

Is it just me, or I lately just saw a lot of devs putting their gamepages in private when their screenshots don't turn out good?

i'm leaning towards sad, though.

09/02/2015 11:01 PM
this totally explains why your games are full of miserable, unlikable jackasses i guess. gj if that's really what you were going for.

doesn't explain away all the bad writing and direction though.

[RMVX ACE] Are there any games without those horrid default sprites?

author=Craze
ALSO YOU SAID WHERE THE GRAPHICS COME FROM DOESN'T MATTER AND THAT'S SO FALSE. the rtp is just vanilla, meant to be an "everygame" thing. one of the biggest reasons to edit your rtp characters is to make them not just Ralph (unless you're me and try to own the rtp for yourself like an asshole). but when i see surlent from rudras going from being a male undead scholar to a female valkyrie or something (this isn't an attack on balmung, just the first thing to come to mind), i lose a little something.

anyway continue disliking me and my stance on mapping/everything if you want, it can be mutual! or we could be friendly and i'll bite my tongue instead of saying "ur gam sux omega lol". like, bite my tongue clean off and mail it to you. because friendship. i have plenty of other people to pick on for being more effective jerks than you !!

Like, it's obviously a pointed comment if you're calling out games that use ripped graphics for the flaw of unoriginality or 'lack of talent', when the RPGMaker Web crowd literally embodies such a thing. It's just pretty obvious from your past comments where you stand. You're evaluating these projects based on the source of their tiles, not the games themselves, and therein lies the absense of logic or creative respect. I'm not sure why I'm the only one who notices or takes issue with that, but it's insultingly ignorant.

I personally could care less if you want to make tired cracks at my game, but even more than that, there are dozens of our peers who have used predominantly unoriginal tiles. Tbh, I'm annoyed on their behalf. When you phrase your statements the way you have, you're essentially equating it with laziness and lack of vision, when there's so much more that goes into the whole of a game's design and effectiveness.

Haha idk man, correct me if I'm reading it wrong! I certainly hope that I am!

yeah - you're exactly right blind, rips didn't make beloved rapture bad. shit writing, gameplay and your absolute refusal to improve any of it did. that you're still trying to defend yourself under the pretense of people being 'racist' against rips is just tragic, frankly.

but yeah, anyway - are you seriously trying to protect your ego by implying their are a whole ton of people 'offended' by craze's statements? you're not fooling anybody, bucko. that metaphorical umbrella you set up for yourself is very lonely.

but please do continue pretending this isn't all about you. it's comedy fucking gold.

Fable Of Heroes III is in production

04/13/2015 03:14 AM
Props to you for your persistence and patience. Most people make lots of noise about the games they are making, but you always seem to be quietly working away on new games that actually - go figure - get finished.