Close
At the start of 2019, I started my game development journey and tried to start making games. Game development combines two of my favorite things which are creating worlds and interacting with games. 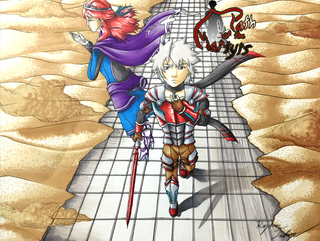 Path of the Martyrs

What will you sacrifice for your ambitions?

[RMMV] My game is still pending

[RMMV] My game is still pending

05/03/2021 07:41 PM
Hello my name is Kazuki Takamura and my game Blessed Relics Chronis is still still pending. I submitted the game on the 24th of April. I didn't know how to contact the staff directly so I am posting here. I want to know whether there are things I need to fix on the game's description or not. If any staff sees this think you taking the time to look at this.

04/30/2021 01:19 AM
I thoroughly enjoyed this game. I liked you used the flashbacks to strengthen the bond Stelyvan and Elysys shared. The flashback and helping a loved one and having flashbacks accompanying it gave me similar vibes to my own game Path of the Martyrs. However, my gave is an RPG and less dark.

I also noticed you had a prequel-ish game where you played as Elysys called Black Ritual but it was deleted.

04/11/2021 04:30 PM
This was definitely an interesting story. I like the twist villain at the end thought. Although having the busts in different styles and sizes was a little jarring.

12/15/2020 12:18 AM
This was definitely a fun game. I like how there is no one solution to each of the heists. Although, having a story other then your brother getting you into loads of debt and character banter(after heists and/or at home). I think with these two additions it may liven up the game even more.

10/26/2020 01:56 AM
I just finished, I liked how you incorporated player choice on who survived and who did. It helped make my choices meaningful. I also like the twist villain(I won't spoil it) The characters didn't really feel fleshed out, but there is a base there and I could understand you were doing this within a time limit. If you ever make a full version of this game maybe you could expand on the characters back story and overall character.

10/15/2020 07:09 PM
This game definitely was interesting. The weird part threw me for a loop and the atmosphere in some area were really well done. The mapping is something to be desired, however, you said that was intentional.The other characters other than Gwen felt like there was potential but if they had a bit more screen time their inclusion in the game would of felt more meaningful.

Overall, this was an interesting experience and if I were to describe this game it would be a, "a wolf in sheep's clothing, but the wolf can talk."

Abyssal of the Opera

The main menu could have a song to describe the mood of the game
- The intro song is nice and catchy but, you could turn the volume of the song up
- The tutorial after you mastered the skill seemed in trusive because it was in the middle of the cutscene of Arthur going to the eye. You should have had when you actually have access to the menu.
- I like how you subverted the troupe of the hero saving the day
- Some the text is a little too big in the menus so you could use Yanfly’s Text plugin to shrink so they fit.
- The game has a lot of personality and how you integrated music and stageplay into the game

Overall, I enjoyed the experience the game offer, it didn't feel like many RPGs I have ever played based on its setting alone. I also liked how each character had a role to play in battle which made each character invaluable. I think the characters were the stars of the show (literally) they were quite a joy to watch and I liked how each of their personalities played off each other.

I was wondering if it wasn't too much trouble you wouldn't mind taking a look at my game as well? https://rpgmaker.net/games/11486/

01/24/2020 11:16 PM
I played you game a few months back, I don't know why I didn't reply sooner. I like the shop management mechanic its kind of neat. Building your shop from an abandoned shack was definitely a fun prospect. I tried my hand at it, for my third game, but it wasn't what I wanted. Instead, I am making a sequel to my first game.

I was wondering if you like to try out one of my games called "The Heart's Fallacy". It a rather short horror RM game I made for a game jam. If you are interested here's the link to the game: https://rpgmaker.net/games/11353/
Pages: first prev 123 next last