Close
I'm a young fool and I make games via RM. I enjoy game mechanics and theories, especially new graphical experiments. I'm a master chip splicer and I draw my own resources as well. Teaching myself how to digitally paint via PS, after pixeling for several years. 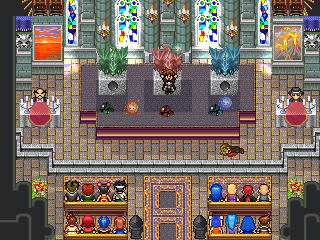 3 Gods created the World. Now their souls are destroying it!

Setup
OK, so I am working on a minesweeper-esque mini-game in rm2k3/ I have everything coded exactly as I want it, but the flagging is giving me some trouble.

Basically, I have ambiguous tiled events, that can be called as flags, bombs or normal cells, each corresponding to their own action, since you can make any cell on the grid flagged. The max amount of flags is 5. I use a counter var on a loop to decide when you place a flag, which number are you placing, and then record those vars to the corresponding flag X and Y. Each flag is mapped to 2 switches, 1 turns on when you hover over its position with the cursor, the other one tests if there is a flag open in the loc of your cursor, it turns off that flag.

Problem
That much works fine so far. But the problem arises because of the linear creation of the flag placement. For example, if you place flags |1|-|2|-|3| and then erase flag 2, the code will be unsure which flag to place next because there is a gap. (even if flags aren't next to each other, all flags after the gap need to be erased to have the order/hierarchy stay intact.)

Tried Solutions
I have tried 2 solutions to this. The first one simply adds +1 or -1 at the end of each turn flag off case, which is fine for counting the amount of flags you have left/flags you have placed, but doesn't help the integrity of ordered hierarchy.

The 2nd solution I tried was a bit more complex. I basically used pointer vars, set them depending on which flag the cursor was on, and used temp vars to roll back the pointers by 2 (to hit the x/y of previous flag in var list) and test if those coords were 0, indicating a gap, that I could fill by branching. This theoretically should work but in testing has not helped.

01/31/2012 09:22 PM
Ok so I am coding a puzzle where you move big objects, comprised of multiple events. (12 for each object) This is easy enough, but I am trying to concoct a way to make it so the events moved (with move event command) stay on that specified tile without the tedious method of assigning x and y vars to every event (each object is 12 events and there are 7 of them) and then change event location for every event to its assigned variables.

I've thought of a couple ideas like maybe trying to use cherry's big charaset patch, but as far as I know that only works for 2k. Pictures could potentially work but appear above hero layer. (I've thought of temporarily converting the hero to picture as well but it seems gratuitous) Panos wouldn't make sense. I wish I could use a memorize placement command for events other than the hero.

Anyone wants to kick theories about this?

01/11/2012 11:11 PM
I'm making an input based mini game. It works like this, there's one master event set to autorun that calls the input generator (decides which key you have to press).

The Key Input Processing is set to wait until key is pressed, and stores the amount of time it takes to press the key.

Then it just branches to see if you pressed the right key in a fast enough time, which triggers bits of dialogue from the master autorun event. It works perfectly unless you press nothing.

My problem is this, I can't figure out how to erase the input generated if no keys are pressed. (wrong presses +1) It sounds simple in theory, to branch if the key press is 0, shut down the event and +1 to wrong presses. If I put a branch like this under the key input processing command, it won't do anything unless a key is pressed, which would have to be >0, so that portion of code never commences.

I've tried a couple theories, including separate pp/autorun events branching if key press is 0 after an allotted wait command. Does anyone have any ideas or theories about this? I know my RM very well, but this is a roadblock for me. I can post code if I have to. Thanks for any help.

07/29/2011 04:20 PM
There's this weird glitch in rm2k3. Assigning a skill with an attribute makes the skill unusable in battle. The only way to reconcile this, is to get rid of the attributes, which cheapens the battle experience. Anyone know why this happens or if there's a patch for it?