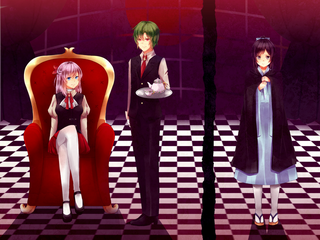 04/28/2014 05:07 AM
I'm not that fussed about whether or not they're negative reviews, I'm just wondering if there is some kind of bug or problem involved. If so, an admin should know.

04/28/2014 04:34 AM
I was thinking it was a site bug, that's why I put the notification here, but I don't see any other games being affected. It could be hacking, I suppose, which I think the admins should look into immediately. I was immediately curious because it shows that it has 5 stars and 4 reviews, but when I tried to read the reviews I realized there was no "reviews" tab at all. So I went and typed in http://rpgmaker.net/games/6183/reviews and found four reviews, all with 5 stars, but they are all critical reviews titled things like "Ill thought-out" or said to be "poorly thought-out" or a "rip-off". Just to be sure, I searched online for "Konstandin reviews" and found the "Ill thought-out" review under latest reviews, and that one says 1 star and not 5.

I was very confused, and finally I decided to submit it here because if it's a bug, it'll be better for the admins to know quickly. Thanks!

04/28/2014 04:10 AM
Can someone explain why all the reviews say 5 stars but are clearly critical reviews? Also why is the reviews tab gone from the main page? I don't understand.

04/15/2014 10:44 AM
Thanks for the review. I really appreciate it. :) And yep, I guess I could've just described it as a Japanese deconstruction of Romeo and Juliet, but that would've just spoiled it, heh.

04/15/2014 03:25 AM
Hahaha, that sounds pretty interesting, but isn't really the effect I'm trying to get at, so thanks for telling me. I've tried altering the guy's expression. Does it still give off that feel?

What measure is a non-human?