Close
Just a girl who loves making games as much as she plays them!
I enjoy using Ren'Py, RPG Maker VX Ace, and MV to create my games. I also love to sing and voice act. 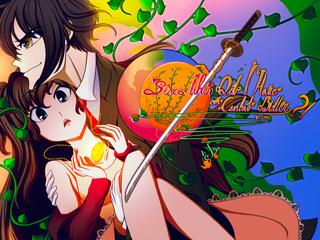 author=Liberty
Yep, that's fine. As long as you follow the rules of both jams it should be peachy! As Beregon said, people have done this a number of times~

Thank you both for your answer ^^

author=Beregon
I'm pretty sure it's fine so long as the game follows the rules of both game jams. People do it all the time and did so during both the Halloween event and the Trials of MZ event.

I just realized at Itch, unless someone happens to have the same username, that this RTP jam I am speaking of happens to be yours haha!

[Poll] RPG Maker users: Which engine do you use the most these days?

01/29/2021 05:37 PM
Lately, I have enjoyed MV. I adore its character generator and the ability to export at multiple OS systems. I do still favor VX Ace quite a bit though, especially since a lot more resources exist for it too. So I kinda go back and forth between the two.

I really need to release a project for 2k3 and XP though.

01/29/2021 05:34 PM
Seriously thinking about writing up something or making a video to give advice and a tutorial on how to tackle adding voice acting to RM projects. I just love an excuse talking about adding voice acting in general and it'd be fun to talk about the process of casting, directing, cutting, leveling, and applying those lines.

author=Marrend
The "Submit" button either lets you submit a download the the event directly (ie: uses the Event Locker), or select a previously established download from a gamepage from a drop-down list. I believe this event uses the latter method.

Ah, I see the button now! (It kinda blended in with the banner). Thank you!

author=Kokoro-Hane
But I have a question... as I see it is a solo event, are we allowed post-event to update our game?

Working on a game post-event should be fine? I would, personally, suggest separating any work done post-event into a separate download. If nothing else, to be a kind of record to show how much the game progressed from it's infancy, as it were.

Oh yeah, if I made a post-event build, it'd be a new available download so people can play either version if I did do that!

Also, when we are done with an entry, how do we submit it here? Just link the game page in this thread?

But I have a question... as I see it is a solo event, are we allowed post-event to update our game? I ask 'cause I usually have voice over, which would count as a team, so would I be allowed to make a post-event build with voice over so long as I keep the original unvoiced online?

The Only One Girl { First Quarter }

author=RoyalBean
Ah I love the game so much, I just got it last night and I think I've gotten all the scenarios.. Though I might just be missing one because I think I've gotten everything unlocked but one of the fanarts... I'll figure this out somehow!!

Hi there! Much apologies for not responding sooner, I have not been on this site as often. How many did you unlock? I remember there being one slot too many, so if you only have one more to unlock, you actually got them all--this was a graphical error on my part.

12/15/2019 11:28 PM
Ahhh this is so neat to spotlight games of old made for the engine!! I absolutely love exploring all games, and when I start to use an engine, I want to know what treasures the community has made over the years and how things have improved or simply changed. This will be a great way for me to discover some interesting works, keep it up!! ^^

Mapping Is You: Personal Style Philosophy

12/15/2019 11:06 PM
I am honestly not the best mapper in the world, I am seeking to improve, but honestly I really can't let go of my "so bad it's good" styling--this is mainly due, perhaps, since majority of the RPGs I love to make are of a comedic variety. I like to experiment with glitchy shadows, too, haha. Makes a feel of "being under of a cluster".

I do feel like I have improved somewhat. In my latest game, I quite like how I made the main character's quarters. There's a lot of stuff, it's messy, but that is the point--he lives where all the pipes and machines are and I did my best to put more effort in this map. Working on a sequel to my game with purposely terrible and experimental maps, I am actually working on making maps that have more effort than the original due to the fact I have no time limit. Very simplistic, but yet, I love it that way, I feel it sets apart and makes the world in a really strange way. Maybe the improvement seems subtle, but it's there lol 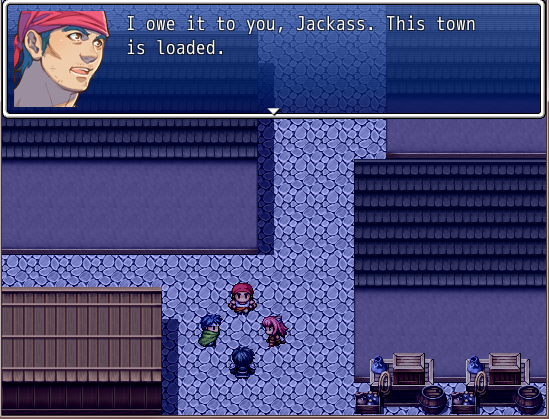 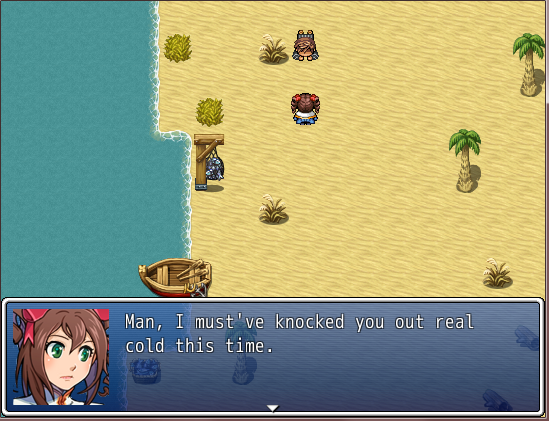 Of course, I do have to recycle some originally bad maps, including the glitchy looking port, but I did make it look more like a port by adding broken boats, nets, and seafood (port edits by PandaMaru). I may like blank space maps to an extent, but even I felt the original was too naked--now it looks like a real port! 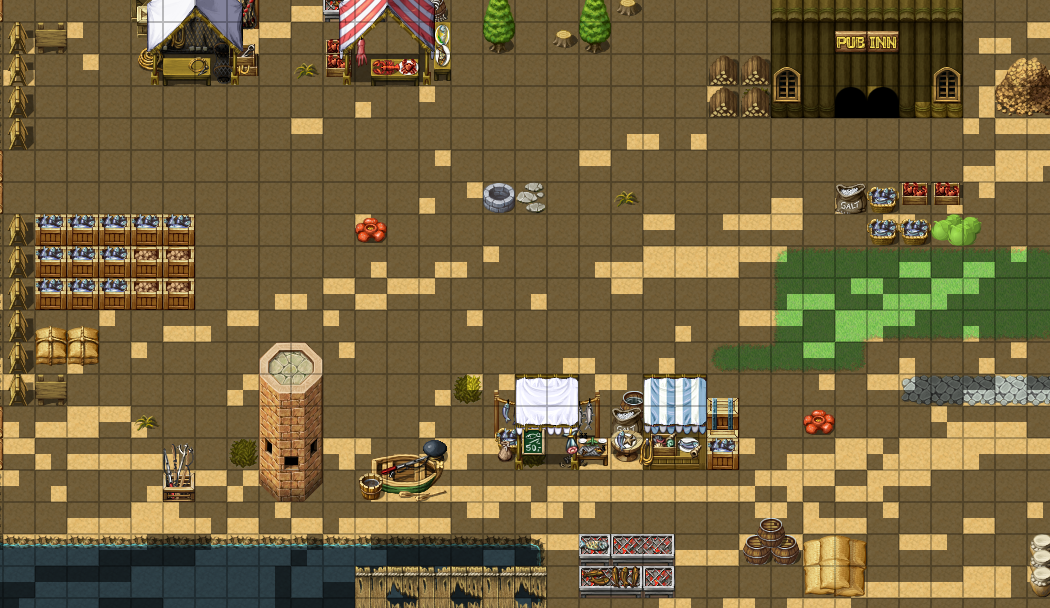 Honestly, these maps are still much better than my very very first maps in practice projects I used to make, oh my lord. But there is something I like about really experimenting with tiles, and yes they make weird results, but it's fun--even if it may be jarring to some, but i namely due it if it suits the world I am making (and for comedic fantasy, it suits well IMO). So hmmm... I guess I would describe my mapping style to be quite chaotic, but I try to do so within reason of the world I am making.
Pages: first 123 next last