The K is for Knowledge, because I'm smarter than all you suckers.
2472

Close
Hello guys and gals! I am a 18 year old young adult with many disabilities. Despite this I will continue to make many games using RPG Maker MV. Due to technical difficulties, Generic RPG Quest 3 will now be put on indefinite hiatus. It is not CANCELLED per say, it will continue, but due to various problems I would have to restart the project from scratch, and as of now that isn't really worth it for me.

Since Crypt Challenge DX is now complete I will now work on the first true game set in the Chronicles of Chronicles universe, Firebrand Chronicles. That game will be a professional level commercial game on steam, and due to that the game will likely not be released for many years as I have to create the assets and obtain money to commission music, art, animations, and possibly get some voice actors for the FMVs and for voice clips in the cutscenes.

In the meantime, I also have plans for three other games in the Chronicles of Chronicles universe made in RPG Maker MV. They are all complete re-imaginings, or RE:Births as I like to call them of my first three RPG Maker Games: Meteo Chronicles, (Chronicles of Light) Zero Gear Chronicles, (Zero Gear Fighters) and Ebony Chronicles. (Zero Gear Fighters 2: Dragon Ascension) You can expect those to release from mid-2020 to early-2021. After that I plan to work on the "Genesis Saga," the "Sakura Saga," the "Boltman Saga," and the "Final Saga."

The Genesis Saga includes the games Genesis Chronicles and Unreal Chronicles. Genesis Chronicles is a visual novel with some fights that tells the backstory of the world of Zutara as well as the first hero Ryu and the war against the fallen dragon Mordrake. Unreal Chronicles is an adaptation of a bizarre and mysterious collection of art and manuscripts called "The Realms of the Unreal," written by the late Henry Darner in the late 1890s and early 1900s. It is a SRPG with 32 maps divided into 2 parts.

The Sakura Saga includes 4 games, Generic RPG Quest III: A Realm Reborn, Sakura Chronicles, Sakura Chronicles 2, and 333:Countdown to Destruction. GRPGQ3:ARR is exactly as it sounds, a remastered version of Generic RPG Quest III sorta like what was done with Final Fantasy XIV and Final Fantasy XIV: A Realm Reborn, hence the title.

Both Sakura Chronicles and Sakura Chronicles 2 are 8-bit styled metroidvania games similar in mechanics to the Megaman ZX games, albeit heavily upgraded with a better map, better game mechanics, and a larger scope. 333: Countdown to Destruction is a fast-paced 2D Platformer in which you have all your abilities from the start. The catch? You only have exactly 3 hours and 33 minutes to complete the game. Are you up to the task? Sakura Chronicles 1 and 2 as well as 3:33 will be made with GameMaker Studio 2 instead of RPG Maker
MV and will be commercial titles.

Then there is the Boltman Saga which includes 3 games with 3-5 episodes each. It includes Boltman Chronicles Episodes 1-3, Titanium Chronicles 1-3 plus an epilogue, and Secret Borough Chronicles 1-5. They tell the story of a millionaire turned superhero who defeats villains and explores space, time, and even his own identity! All the games are all about 4 hours long or less and pretty short, varying wildly in gameplay and tone while still keeping the same systems intact.

Finally, there is Final Chronicles, the final game of the Chronicles of Chronicles games. A post-apocalyptic RPG that asks one simple question, when does self expression go to far, and how far can it go before the world crumbles before you? Featuring all the Chronicles of Chronicles characters in a world corrupted by evil and filled with false prophets, will the heroes be able to stop the revival of the ultimate evil Elzakalas and the destruction of all of reality? Find out! (In a really long time lol.) 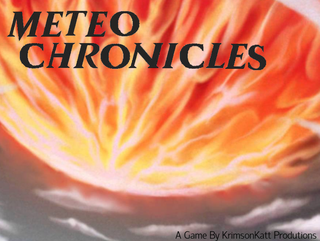