Close
04/07/2020 01:57 AM
Hello everyone. KrimsonKatt here, and I’m finally back from my 6 month ban. In this post I will apologize for my actions and explain what happened with my ban.

The thing I want to admit to first is that I messed up, and am here to apologize. I am very, very sorry for writing that long rant on my status complaining about the review score on my game. I really should have not done that and should have thought through my actions, re-read my post, and re-worded and edited it to better express my opinions. I am sincerely sorry about what I said on that community post, and I hope you can all forgive me.

Now that I have had time to reflect on it, I have changed my views a lot from what I wrote at that time. I would like to specifically apologize to @lavendersiren and @liberty. Instead of my rant, I should have said was that I was disappointed in the reviews, as I feared that if people saw my game only had a 1.5 star ranking that they wouldn’t play it. At the time I felt the reviews were a bit unfair but I should have handled it differently.

Also, I would like to explain why I was banned. I was actually banned due to a misunderstanding with a review posted to my game. The review that was posted to my game had the same IP address as my account as well as having a similar writing style and having being posted right after I ranted about getting bad reviews.

The admins thought that I had made an alt to post a positive review of my game, which I agree is really wrong. I was 100% aware of this rule, but when I first released my game I sent out links to my family and friends to play and possibly review my game. My father actually ended up playing the game and writing a 4.5 star review which was flagged due to the admins thinking that it was posted by an alt of me. Yes, the review that got me banned was posted by my father, and this was all one big misunderstanding. My dad tried to explain to the admins, but in the end they either didn't believe him or decided to keep me banned anyway. I wasn't trying to “ban evade” and never created an alt. I just want everyone to know that.

Overall, this has been a major learning experience for me, as I have learned the important lesson of thinking about what you post before you post it, and I hope the users of RMN will find this apology acceptable. Thank you.
Mirak

Here, I made you a welcome back present, for the memories I didn't know I had but that you stirred with this post that you could have very well have decided to just not make but here we are. Apologies for the weird english, you caught me in my just-woke-up-and-saw-facebook-doomposting moment.

Anyway, yes, your present. It is a gameover screen for RPG Maker 2003. I'm pretty sure you can also use it for 2000, either legal or illegal versions. 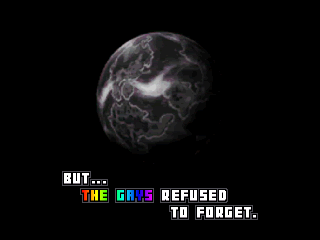 No need to thank me or give me credit even.
KrimsonKatt

Close
04/07/2020 09:17 PM
Thanks. It's really funny. Made me laugh out loud lol. Cool that it is an edit from Chrono Trigger, one of my favorite RPGs. I might use it as a joke ending in one of my games. I could just download the PNG, format it to MV size, and presto! MV game over screen. Thanks for the gift!
Gourd_Clae

I am a little curious as to how your beliefs have changed, though!

author=Gourd_Clae
@KK for what it's worth, a 1.5-star review is not the reason I won't play your game

Close
04/08/2020 10:28 PM
@Unity Sorry, I made assumptions based on my own personal experience. I would never play a game with a low rating, but everyone is different.

@Gourd_Clae The main thing that has changed is that I no longer think there is some "gay conspiracy" out to get me. But it is really funny to look back on how stupid and paranoid I was in thinking that lol. I think @Mirak did a good job representing this in his post.
Corfaisus

Speaking bluntly: this reads like "I'm sorry I got in trouble. Here's my defense."
KrimsonKatt

Close
04/13/2020 06:48 PM
For a bit I thought my brother did it, but he kept refusing he had anything to do with it. I messaged most of my family members and found out that my dad did it. He tried to contact the RMN twitter but could not get me unbanned. I don't think I ever made public that I once thought my brother did it. (it was maybe for like 2-5 days MAX) Where did you hear that? Just wondering. Anyways, I didn't mean it like that. I continue and always will believe that I didn't make an alt to post a good review and was banned due to a misunderstanding. HOWEVER, I am apologizing for my previous actions involving my long rant on my status, not for any rule breaking I did not actually do.

tldr: I did not get banned due to the rant, but due to a misunderstanding. I am apologizing for the terrible rant I made, not the rule breaking I was accused of.

Edit: My dad would do it because I asked my family and friends to check it out and POSSIBLY review it. I want to clarify that I DIDN'T say "please review my game and please give it 4.5 out higher PLEASE." I just asked for honest opinions on my game, but I do admit a bit of bias might have shown as the know me IRL. Are IRL friends and family not allowed to write reviews on your games, because I've read the RMN rules 4-7 times already and it never mentions not being able to send links to friends and family for review. I try to look back on my emails and see the EXACT words that I said, for more clarity of course.
Pages: 1