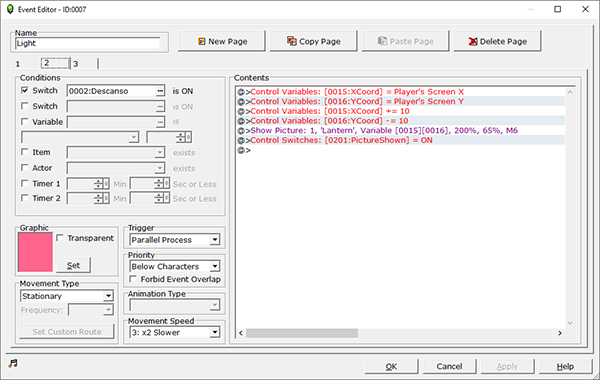 That's how I'm doing something else. But I keep forgetting that the official 2k3 now has spritesheet animation. I'll try it like that.

author=JustRob
Or if that doesn't work, you could try combining the character sprite and the fire sprite together in a charset. Then you could simply change the hero graphic to the fire thing whenever you need.

The fire is animated so a combined charset doesn't work when the player is not moving. (Or I would have to do a weird switcharoo, which I'm not even sure would work smoothly).

author=Frogge
Fairly sure you couldn't have transcluent flames if you did that sadly, but I also think it would be the best solution since logically the character should cover the fire when going upwards.

Edit: Actually, what you're trying to do should be possible, you just have to do it with pictures instead.

Nope, no translucent fire that way. Pictures are an option, but I'm found them hard to work with; if you take a close look, you see the torch light is an image. Originally I had it with a ripple effect, but the Move Picture command is unreliable and I have not found a way to consistently have the picture move and be centered properly.

author=psy_wombats
@Large you can sort of fake arguments by setting aside some variables for your "function" common event that you call arguments and outputs and then always read/write from those when calling the event (see other post). If you want to be fancy about this and make your events reentrant, you'll have to do some more work and the bottom of this rabbithole ends with writing malloc in rm2k/3 to simulate a stack frame. It's doable and a fun exercise but at some point you have to wonder if it's really worth it

This is what I'm experiencing (sorry to hijack for a sec here):

However, I am getting an error like this: "Event referenced does not exist". So it seems that the behavior described is not applying.

It frustrates me to no end.

author=JustRob
Look, you can do this in Show Picture in the retail version of Rm2k3:

Now this saves me a fuckton of space when it comes to displaying the "ones" value (the last digit of a hero's HP). I literally only need one Show Picture and set it to the value that my other event calculated.

Is there any way to do some magic here?

Your modded HP is still saving only one digit, only it represents the digit in the 10s and 100s POSITIONS, not the actual number, no?