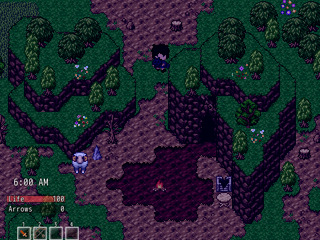 This is a Pixel Quilt with a bit of a twist! Instead of one large quilt, this time we have small half-hearts for people to pick! 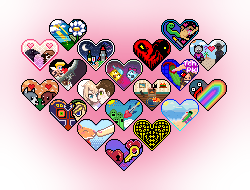 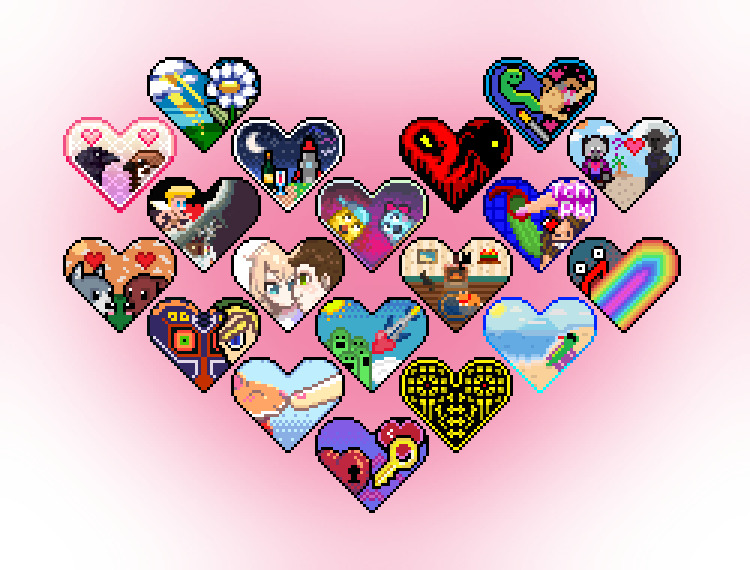 - Pick one half of the below pairs of hearts.
- If you're the first to pick that half, pixel the part you chose (either left or right) and post it in this topic.
- If you're the second to pick a half in a pair, wait until the first half is posted, then fill in the missing half!
- Use the heart half provided as a base and pixel your art there!
- Picture should match along the middle as well as possible.
- Recommend a theme of cute/love/romance/etc but you can pixel whatever, really~
- There is a set number for a reason! You'll see when we finish them all~ This is the reason they're a bit on the small side. ;p
- A badge will come your way when all the hearts are filled if you took part!


We'll start out with allowing one choice per person, but will allow for more than one later on if needed.

Here's the bases to pick from:

Heart A - Ocean and Muffle

Heart B - Illy and esby

Heart I - Fflo and Mirak

2020 was a rough year for many people, but despite the darker times our world has been dealing with, creativity will continue to shine. Many great games came from the site and continue to bring smiles to peoples' faces, connect people with each other, teach and help people experience new worlds and ideas!

I hope this next year will also be one full of people playing and drumming up interest in each others' games - and that we can continue to discuss and support each other, both old and new, despite everything that has been going on lately!


Enough of the sentimental shit, though. The Misaos have been tallied!


Without further ado, here are the official* results for the 2020 Misao awards!


Misao for Best Game Title
The most clever, original, witty, or cool game title of the year.

Misao for Best Game Profile
The raddest presentation and marketing of the game.

Misao for Summoner of Sounds Award
The best soundtrack and creative use of sound.

Misao for Excellence in Narrative
The project you think is most effective at telling its story. Think in terms of its presentation, writing, clarity, cutscene direction, or Shyamalan twists.

Misao for The "How the Hell Did They Do That?" Award
The game that displays the most technical prowess and feats of ingenuity in gameplay.

Misao for "Best Short Game" Award
The best under-1-hour game that you played this year!

Misao for The Dark Souls of RMN
The game that delivers the best challenges or coolest puzzles.

Misao for Punniest Game Alive
Comedic game of the year. Pick the funniest game you played this year, with the best humour and/or the best/worst puns.

Misao for Trippiest Game
The game that was most strange, bizarre, psychedelic, offbeat, and quirky released this year.

Misao for Year of the Hedgehog
Best use of animals/doggos/pets/hedgehogs in a game this year.

Misao for Best Event Game
For the best of the event games that came from this year.

The game with no name


Misao for Not Dead Yet Award
Given to the best old game that was finally finished this year.

Misao for Star Stealing Prince Award
The game that used the best original assets this year.

Misao for "Everlasting Journey" Award
The game that has the most content to offer.

Misao for Best Non-English Game
Given to the best translated or non-English game released this year.

Misao for Game of the Year
The absolute best game you played from RMN for the current year.

01/30/2021 10:25 AM
The Misaos have some issues that have become apparent over the course of the last few years. Ideas have been thrown around but the biggest issue seems to be two-fold:

1- Games are being nominated for categories that they do not fit and due to how the site works, cannot be manually removed.

2- Not enough nominations within categories to allow for a good amount of fitting games to judge from.

On top of those issues are the usual ones:
- not enough people playing the games to nominate/vote them
- not enough marketing during the year to keep the misaos in mind


Now, bar having some edits to the backend to allow edits to the Misaos, I've come up with a kinda simple idea that might help cover some of these issues.

- Keep the normal nominations as they are. No change to the set-up of the nominations at this point - through the year you can nominate the games on the site that you think fit a specific category.

- Use another site for the voting section. This would use the usual nomination round-up using the base form results, but curation would occur to cut out games that don't fit in the proper categories and add games that were well-recieved during the year.

- Adding games that were overlooked or not nominated. Usually we require 2 nominations to get a game into a category for voting. In this case we'd have a couple of staff who have played games over the year to nominate their top picks. Possibly tap the top reviewers of the year for their thoughts, too, and also add any event winners and front-paged games from over the year (both Featured and Spotlights).

- More instances of rounding up and review drives to get people playing more games released during the year.

- More marketing for Misao Nominations, possibly including raffle draws (there's one on at the moment!!!) and mini-events with badges.

Of course, this is just an idea on my part, but one I think would help get the Misaos back into swing. If you have ideas, let us know.

(NSFW) Example for topics with NSFW art in them


Check the post below for how to handle sharing your NSFW art!

You will need to post a link to it in this thread when finished. Also, feel free to share resources here too!

You will then receive a Deer badge worth 50MS.

I hereby declare this the Year of the Deer.

Deer have a lot of different symbolism attached to them. Not only are they a symbol of peace, but also one of determination, survival and sovereignty. In many cultures, the deer is a symbol of spiritual authority and their antlers serve as a symbol of regeneration and renewal.

Across many cultures, the deer symbolizes piety, devotion, harmony, happiness, peace, longevity, sensitivity, intuition, gentleness, fertility and softness. They are often considered messengers of a spiritual being, translators and guides to those who are lost. 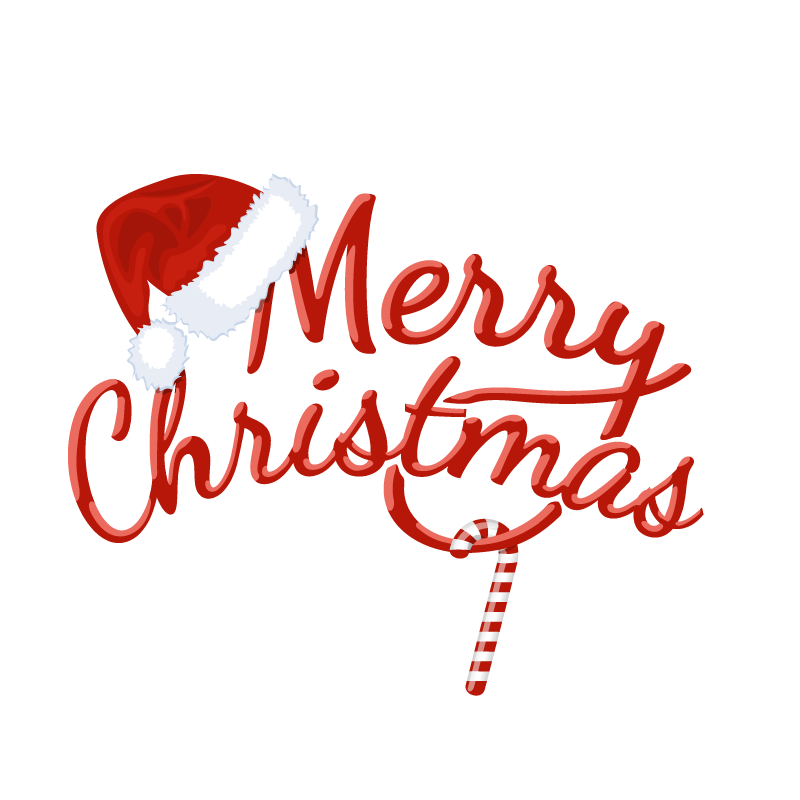 Hope you all have a wonderduf christmas and that next year isn't filled with plague, hate crimes and assholes!
<3

Rules are as follows:
- First rule of Secret Santa club. Don't talk about Secret Santa club.
- Second rule of Secret Santa club. See rule #1.
- Sign up below by leaving a comment that lets me know you're joining in.
- In that same comment list a few things that are your interests or that you'd like to get. It could be a review for a particular game of yours, the fact you like legos and spiderman or something of the like.
- The cut-off date for joining is the 9th of December.
- You will have until the 22nd of December to send me via PM the gift for your Secret Santa.
- I will be posting who had whom in this thread on the 26th so don't go spilling the beans before then!

- If you suddenly need to drop out, PM me ASAP and I'll do some rearrangements. It would be preferable that you don't drop out, though.

- While it is not a requirement to have a game in order to join, it makes things a lot easier on your Secret Santa if you do. In the case that you do not have a game, put some thought into what kinds of things you like when you make your list.

Any questions, feel free to ask~

This means that the old account is defunct and if you have a recurring donation that goes through you'll need to update it to the new one. Easily done, though!

The new account is linked to our Donate links, so just throw your deets that way and it should all be fine.

Thanks for all the support you guys send, it's super appreciated, no matter if it's a one-off donation or a continuous one. We love ya'll~<3

05/26/2020 05:08 AM
First games - the bane of all developers who seek to make something from nothing. They're rarely any good and tend to be quite embarrassing to look back on, but sometimes they're worth sharing with the world.

Let's celebrate our shitty first games by sharing them in a thread (because let's face it, most of them won't get past site standards). Use either your locker or an off-site host for linkage.

Use this handy form:


The aim of the event is to make various resources based on a palette given to you at the start, however you will be divided into three teams.

What I need to know from those who are interested in joining is this:
Graphic/Script/Music
Put in order, top to bottom, your best to worst skills as well as a short line of your abilities in each.

For example, for me:
Graphic - I can do pixels and UI pretty well, but not portraits and the like.
Script - I can fudge about with scripts a little in Ace, but I'm not great at it.
Sound - I can do VA, but that's about it.

So, I'm best at graphics, with script and sound kinda being equally bad in most areas. But if I were better at Scripts instead of the other two, I'd put it at the top.


How about you guys?