I'm just here so I don't get fined, man.

Check out my game, yeah?
https://store.steampowered.com/app/492540/She_Dreams_Elsewhere/ 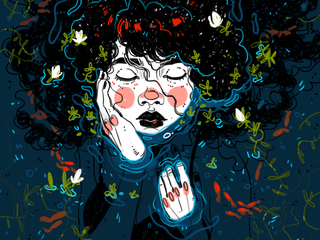 A surreal adventure RPG about dreams and the extent to which they mirror reality.

What was the worst/funniest/most memorable moment you've had while someone else was playing your game?

08/09/2018 03:35 PM
Mine happened pretty recently. I had a few friends over for a live playtest session, the first one I had in awhile. They were playing the first hour of the game, and on THE VERY FIRST ENEMY, they got one-shotted instantly.

What had happened was that I buffed the normal attack skill right beforehand, but forgot that enemies used that same skill as well... hence, instant one-shot. Had to stop the session for a bit to fix things, but after that it was mostly fine.

Another classic example was when Archeia played one of my games for a contest years ago, and due to the weird pixel movement system I used, she couldn't get into the next area and quit the game. Probably one of the more embarassing moments of my RM career. I can't find the video of it anymore, but in retrospect it was pretty hilarious.

What are some of your stories? It can be anything from friends playing it live, streamers, etc.

It's good to be back!

My name is Lorenze, but I used to go by Avvy (or MirokuOsami on other sites). For those of you who don't know or remember me, I've been using RM for about six years now, and I've completed about 10 and worked on about 50 (unfinished) more.

After a long hiatus, I've finally returned to the site with my newest game She Dreams Elsewhere.

I'm really excited to procrastinate even more get back into the community and meet even more people!
Pages: 1